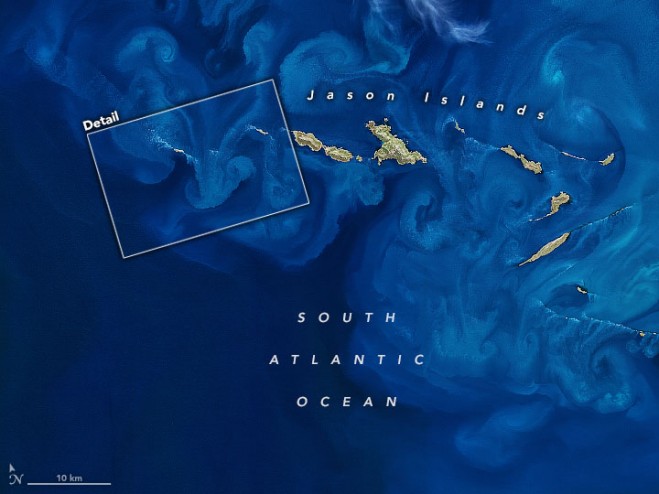 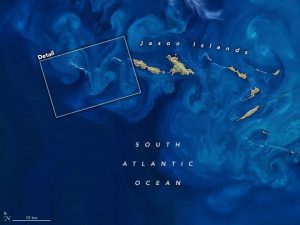 Conditions for phytoplankton blooms often are just right in southern spring and summer in the South Atlantic between South America and the Falkland Islands (Islas Malvinas). Phytoplankton are microscopic, plant-like organisms that use chlorophyll to harness sunlight for energy. They form the center of the marine food web, serving as a primary food source for zooplankton, fish and other marine animals. They also are critical to the global carbon cycle and key producers of the oxygen that makes the planet livable.

This natural-color image was acquired by the Operational Land Imager (OLI) on the Landsat 8 satellite on Oct. 18, 2020. Swirls of milky blue water indicate the presence of substantial numbers of phytoplankton around the western Jason Islands, an archipelago off of West Falkland Island. The floating, plant-like organisms get piled up along the edges of currents and eddies, making visible some of the turbulent, dynamic ocean-mixing patterns.

The waters in this area are rich with nutrients carried on the Malvinas Current. Spun off of the Circumpolar Current of the Southern Ocean, the Malvinas flows north and east and is enriched by iron and other nutrients from Antarctica and Patagonia. The waters are made even richer by the interaction of ocean currents along shelf break fronts, where underwater ridges slope down to the deep ocean.