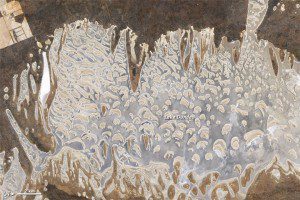 The Advanced Land Imager (ALI) on NASA's Earth Observing-1 (EO-1) satellite captured this natural-color image of Australia's Lake Dundas on Nov. 30, 2011. Note that the image has been rotated so that north is to the right.

Southwest of the lake (image upper left) are agricultural fields, identifiable by their neat, straight borders. The contour of the lake, in contrast, is wildly uneven, with long stretches of dry land poking into the lake from the east and west. Dry, arid climates are the norm in many parts of Australia, and sparse rainfall leaves this lake shallow and salty, especially in the summertime.

Geologic studies indicate that this salt lake was once part of a very different ecosystem.

Lake Dundas sits at the southern end of a line of salt lakes stretching roughly 170 kilometers (105 miles) north to south. Examination of rock layers suggests that these lakes were parts of massive drainage channels. The ancient channel that now holds Lake Dundas likely formed before the Jurassic Period (during the age of the dinosaurs). At that time, Australia and Antarctica were part of the same continent. The drainage channel that now holds salt lakes in Australia was likely fed by headwaters in Antarctica, which is now frozen and 3,800 kilometers (2,400 miles) away.