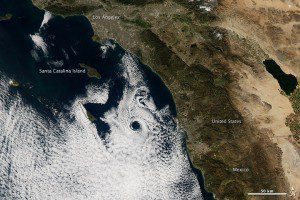 On Feb. 17, 2013, NASA's Aqua satellite captured this natural-color image of an atmospheric eddy off the coast of Southern California. The swirling, circular cloud pattern is known to meteorologists as a Catalina eddy or coastal eddy.

Catalina eddies can bring cooler weather, fog and better air quality into Southern California as they push the marine boundary layer further inland. These mesoscale eddy patterns can stretch across 100 to 200 kilometers (60 to 120 miles) and can last from a few hours to a few days. They most often form between April and October, peaking in June.