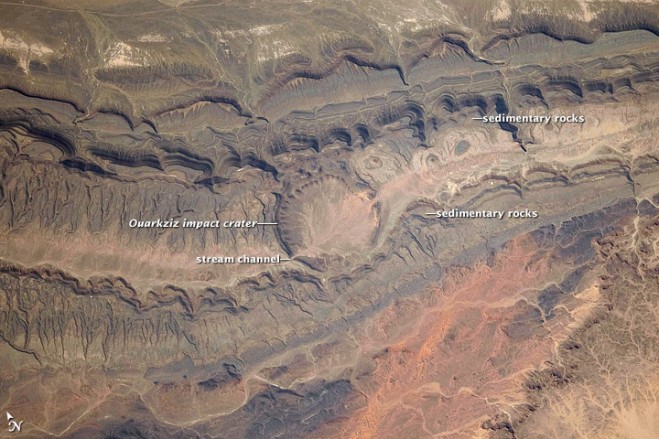 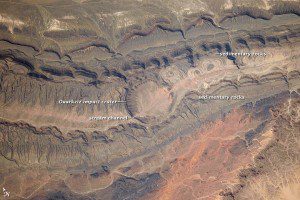 From the vantage point of an astronaut on the International Space Station, the Ouarkziz Impact Crater, located in northwestern Algeria close to the Moroccan border, is clearly visible with a magnifying camera lens.

The crater was formed by a meteor impact less than 70 million years ago, during the late Cretaceous Period of the Mesozoic Era, or “Age of Dinosaurs.”

Originally called Tindouf, the 3.5-kilometer wide crater (image center) has been heavily eroded since its formation; however, its circular morphology is highlighted by exposures of older sedimentary rock layers that form roughly northwest to southeast-trending ridgelines.

A geologist interpreting this image to build a geological history of the region would conclude that the Ouarkziz crater is younger than the sedimentary rocks, as the rock layers had to be already present for the meteor to hit them. Likewise, a stream channel is visible cutting across the center of the structure, indicating the channel formed after the impact had occurred.