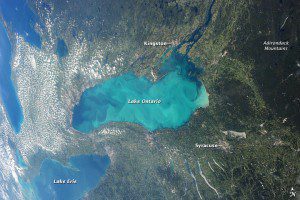 This photograph from the International Space Station highlights a late-summer whiting event visible across much of Lake Ontario. Such events commonly occur in late summer and are caused by changes in water temperature, which allows fine particles of calcium carbonate to form in the water column.

Lake Ontario”like the Great Lakes Erie, Huron and Superior”is roughly divided between the United States and Canada. The U.S. side of Lake Ontario has its shoreline in the state of New York, while its Canadian shoreline lies within the province of Ontario. The city of Kingston, Ontario, is visible near the Saint Lawrence River outflow from the lake. Several other landscape features of New York are visible in the image, including the Finger Lakes region to the west of Syracuse. To the northeast of Syracuse, the dark wooded slopes of the Adirondack Mountains are visible at image upper left. Patchy white cloud cover obscures much of the land surface to the west of Lake Ontario.