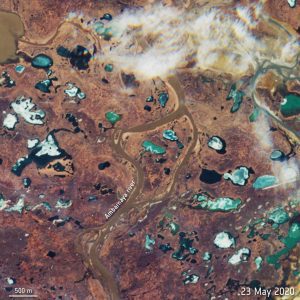 A full animation of the spill can be viewed on the home page at www.eijournal.com.

A state of emergency has been declared after some 20,000 metric tons of diesel oil leaked into a river within the Arctic Circle. Images captured by the Copernicus Sentinel-2 mission show the extent of the spill.

According to media reports, the spillage occurred when a fuel tank at a power plant near Norilsk, operated by a subsidiary of Norilsk Nickel, collapsed on May 29, 2020. The leaked oil is reported to have drifted approximately 12 kilometers from the accident site. In this animation, diesel oil is visible in the Ambarnaya River on May 31 and June 1—easily identifiable in crimson red. The Ambarnaya River flows into Lake Pyasino—a major body of water and source of the Pysaina River.