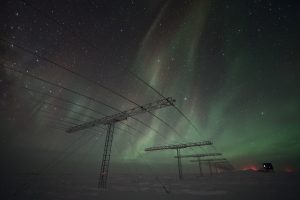 This photograph, taken a short hike from the Geographic South Pole in Antarctica, shows some of the antennas comprising the Super Dual Auroral Radar Network (SuperDARN) array. They are visible here as the chain of antennas and wiring stretching away into the distance. The red lights along the horizon in the background mark the entrances to the Amundsen-Scott research station, which lies about a kilometer in the distance.

SuperDARN is a network of radar antennas that monitors and explores the geomagnetic effects occurring in the Earth's upper atmosphere. Although some of these antennas are located at the South Pole, the network stretches worldwide, and antennas are found in both the northern and southern hemispheres. One such geomagnetic effect is neatly captured here as wispy curtains and streaks of green filling the dark night sky above the antennas themselves: an aurora.

Auroras, informally known as polar lights, form as charged particles from the sun flow into our region of space, hit the outer boundary of Earth's magnetic field, and move further inward to collide with the atoms and molecules in our planet's atmosphere. The aurora seen here is known as aurora australis, or the southern lights.