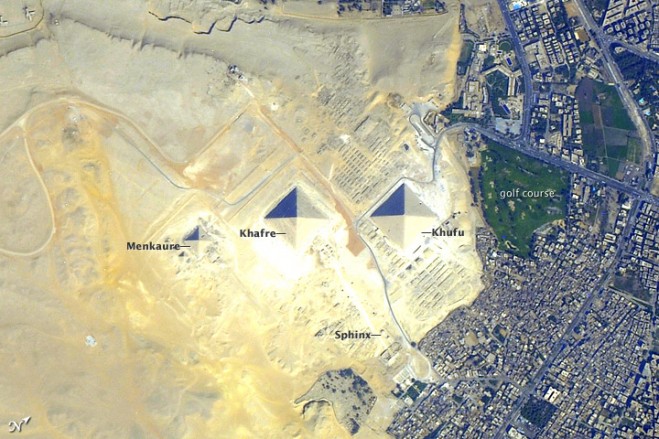 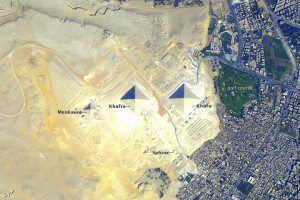 The Great Pyramids at Giza are the last of the Seven Wonders of the Ancient World and perhaps the most famous of the ancient monuments in the Nile River Delta of Egypt. They’re also a favorite subject of photography from orbit—particularly when high-resolution imagery can be obtained.

This subset of a larger astronaut photograph illustrates the detail visible from the International Space Station (ISS) using a long focal-length lens to provide high magnification. With good scene illumination and a steady hand on the camera, current off-the-shelf digital cameras on the ISS can acquire images to rival automated satellite sensors.
The southeast-facing sides of the pyramids of the pharaohs Khufu, Khafre and Menkaure all are brightly illuminated by the sun, while the northwest facing sides are in shadow. This shadowing also highlights smaller, unfinished pyramids to the south of Menkaure’s pyramid and fields of rectangular, flat-roofed mastabas (tombs) to the east and west of Khufu’s pyramid. While not as grand as the pyramids, mastabas were the burial places of prominent people during the time of the ancient pharaohs. To the southeast of Khufu’s pyramid, the head and rear haunches of the Sphinx also are visible (albeit not clearly).