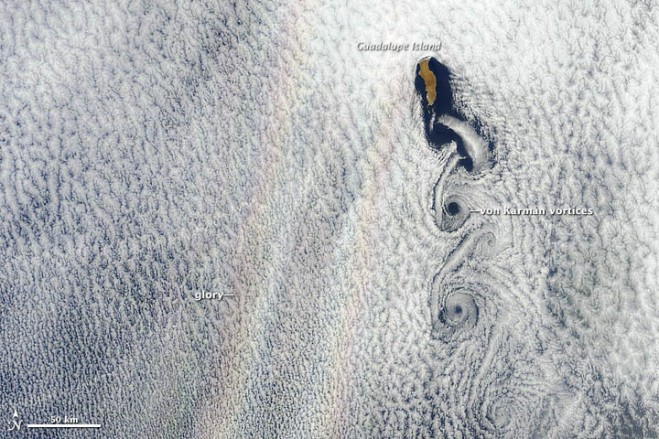 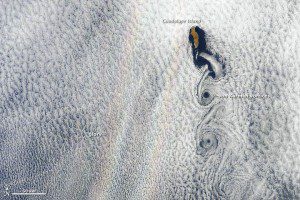 A layer of stratocumulus clouds over the Pacific Ocean served as the backdrop on June 21, 2012, when NASA’s Terra satellite captured this rainbow-like optical phenomenon known as a glory. An added viewing bonus in this image are the swirling von karman vortices visible near the glory.

Glories appear as rings of color in front of mist or fog, forming when water droplets within clouds scatter sunlight back toward an illumination source. Although glories may look similar to rainbows, the way light is scattered to produce them is different. Rainbows are formed by refraction and reflection, but glories are formed by backward diffraction.

The most vivid glories form when an observer looks down on thin clouds with droplets that are between 10 and 30 microns in diameter. The brightest and most colorful glories also form when droplets are roughly the same size.

Glories are usually seen against a background of white clouds. Clouds are white because the sunlight is scattered many times by multiple droplets within the clouds. The white light often obscures details of glories, but without them in the background, the glory would not be visible.