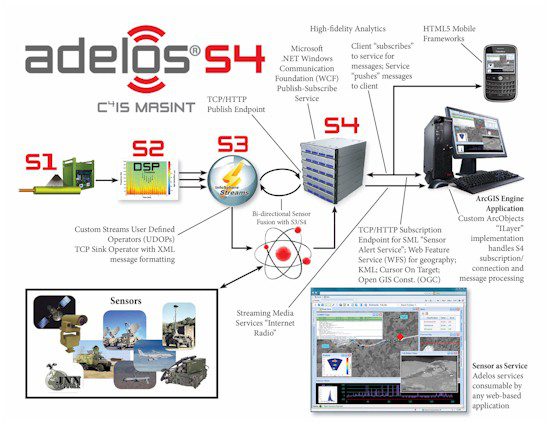 At the core of the processing engine is the IBM InfoSphere Streams technology, which can digest and analyze massive volumes of data in motion flowing in from the sensors. Inherently scalable and highly extensible with native parallelism, IBM Streams serves as the Adelos central nervous system, providing advanced analysis of real-time data flows and interoperable classification and cross-correlation with other sensors. Running on the Streams platform are complex algorithms developed by TerraEchos to analyze the multitude of signals in real time and differentiate them into individual identifiable sounds. The algorithms disregard normal background sounds from ones that are anomalous or associated with known threats, i.e., vehicle engines, footsteps and voices.

Automatic Alerts
Detection of a potential threat triggers several simultaneous and instantaneous automated activities. First, the geographic location of the threat is pinpointed along the fiber-optic array through advanced geospatial analysis. At the same time, Streams enables S4 to interoperate with the sensor web, which may include video networks, radio traffic, unmanned aerial vehicle (UAV) systems and other available sensor systems, to further verify and validate the threat. For example, it may identify an intruder through biometric cross-referencing of his or her voice or facial features.

When a noise is classified as a possible threat, the Adelos communications server posts the alert on a series of map applications and determines who should be alerted based on the threat level and its location. Delivered within seconds of detection by the sensors, these alerts contain details on the identification, location and assessment of the threat. This robust messaging server integrated by GCS Research routes the messages to appropriate mobile phones, rich Internet applications and thick clients.

In the arena of covert intelligence and surveillance, Adelos S4 represents a best-of-class solution from a leading C4ISR team. Adelos S4 protects critical infrastructure and secures vulnerable borders by identifying a potential threat before it knows it has been detected. This shifts the element of surprise in favor of the responders, who can neutralize the threat before it has a chance to inflict damage. Moreover, an accurate identification of the threat ensures the level of response will be adequate.

TerraEchos Inc. is a tribal-owned company and a subsidiary of S&K Technologies Inc. 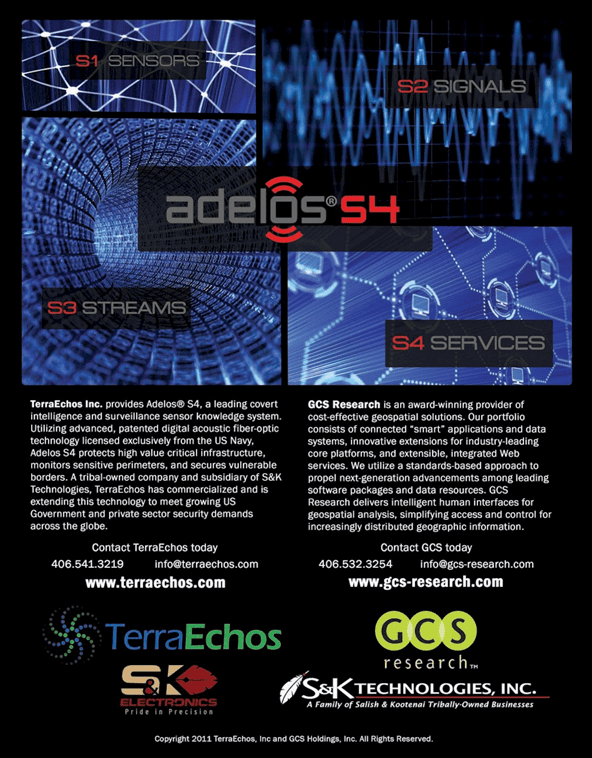