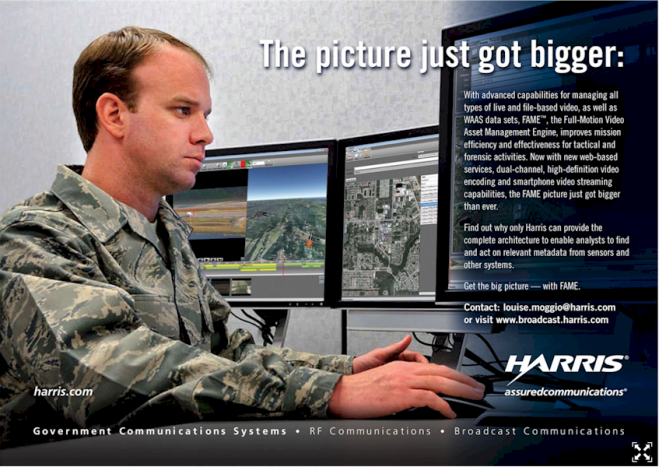 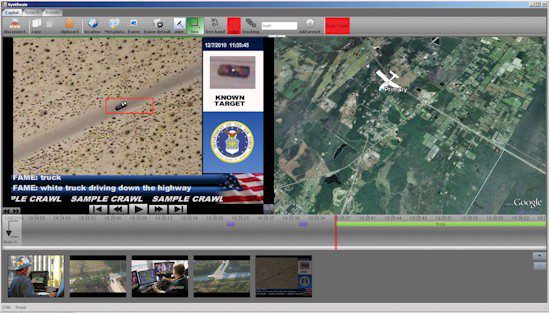 Using the same commercial broadcast technologies that have been proven in demanding television networks around the world, Harris offers the latest architecture of FAME™ — the full-motion video asset management engine — now optimized for federal law enforcement and public safety applications.

The latest evolution of the FAME solution expands upon previous versions by adding greatly enhanced enterprise-level services that are scalable, standards-based and robust for organizations whose missions can’t tolerate downtime. These services allow tools to be used concurrently across hundreds, or even thousands, of FAME systems. Enhancements include simplified system administration, expanded software and hardware options, a video exploitation processor (VEP) and an advanced multiviewer.

The FAME solution processes and federates data about full-motion video in real time, making it available to federal law enforcement agents, analysts and decision makers in the format they need and turning information into a benefit to the law enforcement and public safety community.

Open Architecture
With advanced capabilities for managing all types of live and file-based video, FAME improves efficiency and effectiveness for tactical and forensic activities by providing an architecture to ingest, display and search on any type of imagery. Because FAME is based on an open architecture, it allows users to integrate the solution with existing infrastructure. For example, users can integrate third-party analytics and custom intelligence applications as needed for capture, handling and analysis of video, imagery and other intelligence sources.

Enterprise-Level Services
The FAME architecture greatly speeds an organization’s ability to process metadata by allowing any PC or device in the system to act as a browser-based client that connects to the core network infrastructure video enterprise. Now FAME users anywhere in the world, even over impaired networks, can take advantage of its services.

Imagery Management
An abundance of new types of static, remote mobile surveillance cameras, unmanned aerial vehicles (UAVs) and sensors are producing massive volumes of intelligence data for tactical analysis and forensic, surveillance and training initiatives. Adding to the challenge of volume is that such data often arrive in multiple formats and from various sensors and networks, effectively creating islands of isolated data. Recently developed encoding capabilities for the FAME architecture provide federal agencies with better access to higher-resolution full-motion video (FMV) and visual imagery, regardless of the source.

The FAME system ingests H.264 or MPEG-2 transport streams in digital standard- and high-definition formats, retaining metadata within the stream so they can be stored in the FAME database for searching/cataloging purposes. Searches may be conducted across the entire enterprise, delivering results regardless of where the motion imagery was originally ingested. For agencies that require extremely high-quality video in formats such as MJPEG (Motion JPEG) for evidentiary purposes, the FAME solution enables methods to add metadata to a proxy of the video for analysis, storing the original imagery in an unaltered form.

Simplified System Deployment and Administration
Virtualization enables the FAME solution to share the resources of one physical computer across multiple environments, greatly simplifying system administration. FAME components are integrated, which allows for advanced failover and redundancy techniques, reducing the hardware footprint and complexity involved with scaling FAME systems to many hundreds of users or streams, as well as increasing network efficiency.

The FAME multiviewer provides a mapping context to a data wall, allowing multiple, incoming motion imagery streams to be displayed as an overlay on a common operating picture. The large-format display is dynamically created using rules and preferences, such that certain activities can trigger changes to the way the motion imagery streams are displayed. A new user interface for FAME provides agents with access to cameras in their jurisdiction or region of operations, allowing them to watch live video, as well as pan, tilt and zoom the camera for real-time surveillance.

Intelligence Fusion
The FAME architecture provides an interface through which various metadata tracks can be integrated and referenced against each other and against the live video content for intelligence fusion. The ability to have a singular view of video, as well as other intelligence content, increases the efficiency of investigations that need to find relevant video and metadata to build a case. Successful exploitation of intelligence gives federal agents real-time information that allows them to make decisions effectively while building a case.

Thesaurus
The FAME system includes an intelligent thesaurus under the engine’s “hood.” As the name implies, the FAME Thesaurus automatically searches for all words that are synonyms for the key word searched. In a U.S./Mexico border situation, for example, the FAME Thesaurus will search for all equivalents when the word “truck” is entered in English or “camioneta” is entered in Spanish as the search item; the video identified in the analysis would include images of all trucks, regardless of type.

Real-Time Collaboration
Enhancements to the FAME architecture include new, integrated software tools. Among these is the Media Collaborator™, which, in addition to supporting FMV, also supports Wide Area Large Format (WALF) imagery and ingests JPEG and JPEG2000 files, as well as JPIP streams. The ability to view WALF imagery is significant, as it allows users to zoom in and enlarge specific areas of the larger picture for closer examination. Users can collaborate and annotate on WALF/MI in real time and can associate different pieces of metadata (e.g., audio, video files, pdf files, etc.) with various regions of interest.

More Reporting Capabilities
Harris also has integrated the extremely “lightweight,” yet highly efficient, Flash-based reporting tool into the FAME architecture, which automates the fusion of video, rich graphics and metadata into a Flash video for dissemination to end users. This tool allows analysts to put together actual video footage, graphics and metadata directly from the FAME system into an interactive format that is easy to distribute on intelligence portals. By automating many processes, FAME reduces the time and resources traditionally associated with the processing, exploitation and dissemination (PED) of motion imagery. 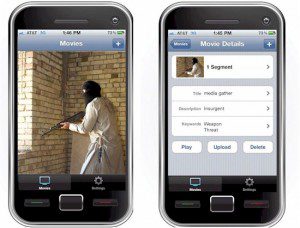 A mobile phone can be used as a sensor on the edge of the network.

Advanced Encoding and Transcoding
The FAME  architecture includes an optional, advanced encoder that maintains video quality—even on compromised networks. The Acuity™ H.264, HD/SD ruggedized encoder provides extremely low latency and superior picture quality. This is important for situational awareness, as well as for post investigations, when agents need to distinguish the difference between items of interest within the video, such as whether the subject is holding a cell phone or a gun.

The FAME solution also provides enhanced transcoding technologies for sending video and associated metadata to the edge of the network on multiple devices/handhelds, further expanding the reach of information. At the same time, field agents, now as sensors, can enhance situational awareness by capturing FMV with the relevant metadata, which is then sent to the network operations center and to agents in the field.

With the integration of FAME with products from other parts of the company’s portfolio, Harris provides a single source and architecture reach from sensors to cameras to operations centers—all controllable within the FAME architecture. This total solution set provides current FAME functionality with a lower profile and footprint, making it much more user friendly for static or deployed locations. 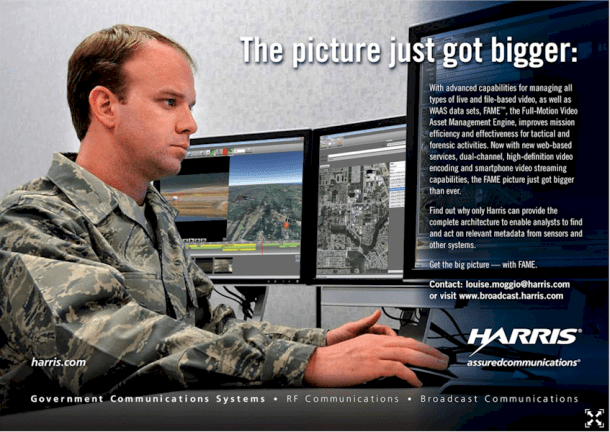