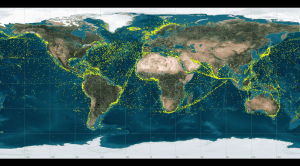 An effective S-AIS can provide comprehensive data on every major ship in the world on a continuous basis.

In the early 2000s, Safety of Life at Sea (SOLAS) Conventions made transmitting AIS messages a mandatory navigation safety requirement for all vessels of 300 gross register tonnage (GRT) or more that are capable of undertaking international voyages or are registered passenger ships—a requirement that now sees a staggering 70,000+ vessels equipped with AIS today. Yet because of the inherently short range of its very high frequency (VHF) signal, which was designed for ship-to-ship or ship-to-shore communication, AIS detection over wider areas initially wasn’t possible.

That was true until S-AIS detection was deployed. Through extensive research and development, exactEarth created a way to detect AIS signals and resolve signal interference with a low-Earth-orbit satellite system. The company has made it possible to detect AIS signals anywhere in the world, feeding a near-real-time data stream from its constellation of polar-orbiting satellites.  Recently, tests in dense shipping conditions—Southeast Asia and Western Europe—detected thousands of ships within a single satellite’s field of view (3,000 miles across). Globally, the constellation is detecting more vessels per day than any other system, setting a high benchmark standard for the new technology. Further technology improvements being deployed in exactEarth satellites—between the fall of 2011 and the end of 2012—promise an even more robust vessel-detection capability. The ultimate goal is to detect all AIS-transmitting vessels at least once per day.

• supplementing, within classified channels, geographic and temporal coverage, as well as creating a backup source in the event of  outages.

•    correlating with other data sources, such as remote sensing assets, to readily differentiate between cooperative and uncooperative vessels.

•    supplying persistent surveillance for remote, inhospitable or hostile coastal regions at a fraction of the cost of physical naval or coast-guard deployments, or installing, operating and maintaining shore-based infrastructure—staffed or unstaffed.

As a global maritime surveillance system, S-AIS is without equal; its widespread operational employment already has been proven by military and civilian organizations alike in some of the most demanding multi­agency environments around the globe. Its current use by the Canadian military potentially provides the North American Aerospace Defense Command (NORAD) with a new quiver of arrows in its fight against maritime-based terrorism, drug smuggling and illegal immigration. Today, S-AIS delivers a cost-effective, persistent, wide-area, open source of data for global maritime safety and security. With exactEarth pushing the performance  envelope of S-AIS, the defense and intelligence community can justifiably rely on this powerful source for maritime geospatial intelligence now and well into the future. 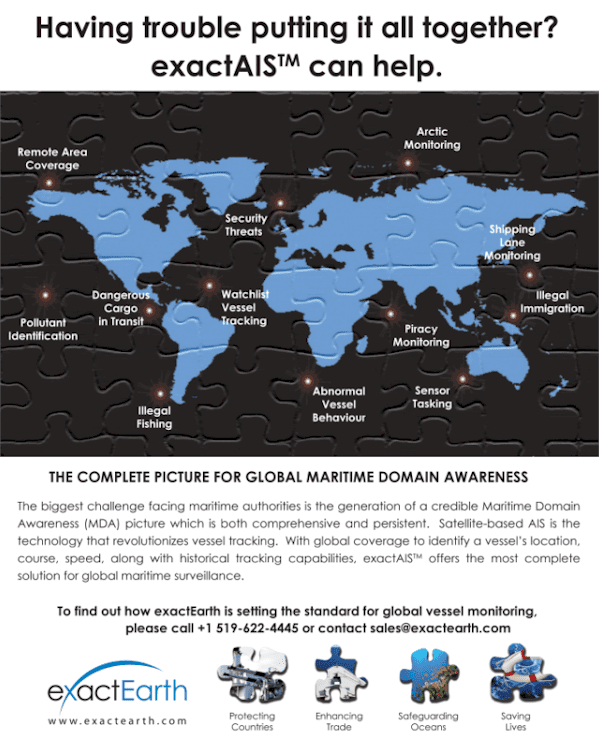