March 1, 2011
GEOGRAPHIC SEARCH AND REFERENCING: DoD Supercharges Location-Based Intelligence Transfer from the Analyst to the Warfighter 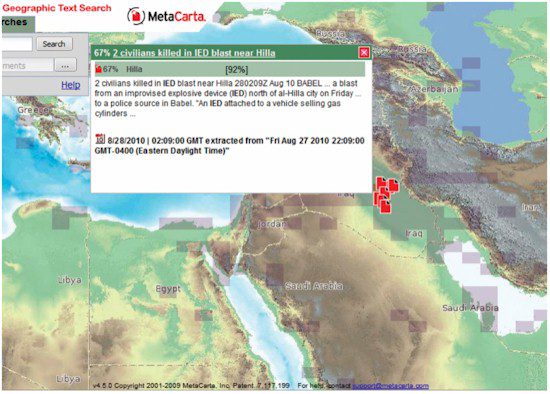 It’s not a lack of information that hinders today’s defense operations; it’s a lack of information convergence. A typical Department of Defense (DoD) unit has tens of millions of unstructured documents at its disposal, in addition to scores of aerial- and ground-based sensor data. But to be useful, all of that data must be correlated, tagged, indexed and plotted on a geolocational common operating picture. It’s an arduous process, requiring months of tedious,manual data manipulation. At least, it used to be.

Geographic Search and Referencing’s Quantum Leap
For one DoD unit, advanced geotagging, geoindexing, geosearch and geolocation technologies have transformed the intelligence analysis and dissemination process, enabling superior protection and preparation for the warfighter.

Of course, condensing months of intelligence work into mere hours has valuable implications for both military operations and forensics. In advance of key campaigns, DoD strategists are gaining tactical advantage by accessing converged text- and sensor-based data from a single, central location. Likewise, forensic specialists are using the correlated information to identify past situational determinants and to mitigate future risks.

MetaCarta Rises to the Occasion
Before settling on a geographic search and referencing partner, MetaCarta’s DoD customer considered multiple solution providers, but none with the Virginia-based company’s combination of speed, accuracy and geolocational data. With more than 200 million locations in its Geographic Data Modules (GDMs), MetaCarta knows of more locations, and how people refer to them, than any other company.

Within a day of the project’s launch, MetaCarta’s GSRP began ingesting millions of unsorted DoD intelligence documents. Within a week, 18 million documents were tagged, indexed, plotted and search-ready. As a matter of fact, the initial installation proved so successful, it wasn’t long before this DoD customer commissioned similar solutions for additional mission environments.

Now, gone are the days of endless, unmethodical rummaging through unstructured data sets. Today, when DoD analysts need location-based intelligence, it’s simply a matter of zooming into a digital map and receiving the cumulative, targeted knowledge of the full defense enterprise—everything needed to deliver sound, informed, life-saving assessments from the base to the battlefield.

“It’s an honor to be a part of the DoD’s geospatial intelligence efforts,” relates MetaCarta Vice President Ken Tomaselli. “Nothing makes this company prouder than its continued support of American warfighters and their coalition partners.” 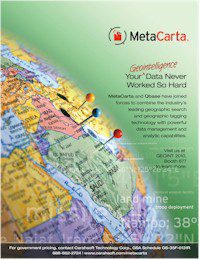