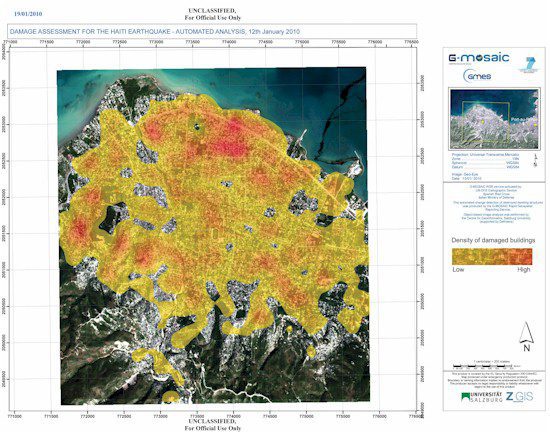 A map of Carrefour, west of Port-au-Prince, Haiti, shows results from an automated damage analysis using change detection and segmentation processes. The map is based on GeoEye imagery acquired Jan. 13, 2010.

The ability to derive intelligence from airborne or satellite-based sensors in an automated or semi-automated way offers numerous advantages for government and relief agencies responding to global disasters and conflicts. It is also a key element in an early response system designed to guide decision making during the critical phases of a disaster.

eCognition’s advanced approach to feature extraction, known as object-based image analysis, supports a broad range of intelligence and rapid-response applications. It is highly scalable, thrives in multisensor production environments and, in the hands of a trained expert, provides a tangible tactical advantage for disaster response teams.

Haiti’s magnitude 7.0 earthquake on Jan. 12, 2010,
resulted in a “worst-case” humanitarian scenario. On Jan. 14, the G-MOSAIC1 Rapid Geospatial Reporting service (www.gmes-gmosaic.eu/haiti.html) was activated at the request of the United Nations Division of Field Support (UN/DFS) and the Spanish Red Cross. Automatic change detection is a useful, powerful tool that is being further developed as a part of G-MOSAIC project activities. In particular, it can speed up production of geospatial intelligence products during emergencies. Using eCognition software, G-MOSAIC partners delivered damage indicator maps within 12 hours of receiving the ortho-rectified satellite images.
In the G-MOSAIC case, the automated approach using eCognition was able to achieve up to 80 percent2 agreement with manual analysis conducted on the same data sets despite serious limitations in the data, including:

• down-sampling of the spatial resolution in the panchromatic band;
• geometric inaccuracies in image pre-processing, such as geometric shift and radiometric differences;
• variations in the pre- and post-earthquake images, such as season and angle-of-image capture; and
• the use of images only—without light detection and ranging (LiDAR) technology or an elevation model.

The rapid mapping delivered in Haiti provided essential geointelligence to help guide decision making. In cases of this sort, time is of critical importance, and analysts inevitably face information overload. Clearing this bottleneck is essential to achieving a tactical advantage in the early hours of an emergency response. eCognition provides that advantage by empowering a human analyst to reduce the time required to screen imagery, queue information for examination and, in some cases, automate analysis processes.

Scaling Human Interpretation
eCognition allows expert knowledge to be scaled using computing power. This is accomplished using a development environment to codify analysis logic within a rule-set-based application. These applications can be executed across vast amounts of data using a robust service-oriented architecture (SOA), GRID infrastructure and 64-bit3 processing. These capabilities, together with sophisticated data fusion, allow eCognition to effectively manage feature extraction within multisensor environments for rapid response, geointelligence or civil applications.

3eCognition 8.64 with 64-bit processing capabilities is scheduled for general release in November 2010. 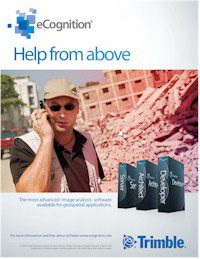