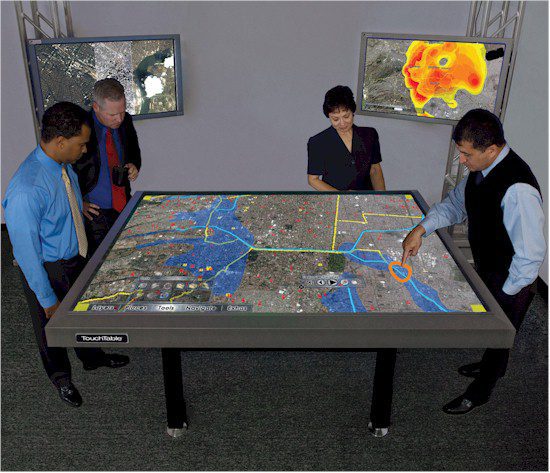 During a Mexico City evacuation drill, decision makers in an emergency operations center use 3D Analyst Extension with a TouchTable TT84 to reach a joint understanding of the city’s critical assets and areas of concern.

On Sept. 19, 1985, Mexico City experienced one of the most devastating earthquakes in history. The magnitude 8.1 quake shook the city in two separate tremors, burying more than 10,000 people amid the rubble. Mexico City officials and citizens commemorate the event by conducting an annual citywide evacuation and simulation, organized by the city’s Civil Protection Department. According to Mayor Marcelo Ebrard, the annual exercise allows the city to “measure response capacity,” which is critical in understanding the current state of the city’s preparedness.

An Evacuation Scenario
The 2009 evacuation drill simulated a 6.9 magnitude earthquake with its epicenter in Atoyac de Alvarez, Guerrero, and included the assumption of a total collapse of the National Lottery building located in the Paseo de la Reforma. The simulation involved more than 12,000 law
enforcement personnel managing the evacuation of a staggering 5.4 million citizens from more than 2,100 buildings—a logistical challenge and dangerous proposition without appropriate tools and resources in place.
Mexico City’s Hazards and Risk Atlas, a comprehensive geographic information system (GIS)-based dataset, allows the city’s Civil Protection team to assess high-risk locations by standardizing a platform to manage the convergence of these datasets. The team’s objective is to improve responsiveness based on the information contained in the Hazards and Risk Atlas.

Innovative Solutions
During the 2009 evacuation simulation, data in Mexico City’s Hazards and Risk Atlas were published using ESRI’s ArcGIS desktop and 3D Analyst Extension. The next step was to access the project through TouchTable’s TouchShare interface to improve data manipulation and sharing. Civil Protection responders used multitouch gestures and visualization tools to communicate objectives and deliver real-time updates to authorities. This combination of tools enabled a broad set of participants in locations throughout the city to share a common operating picture and to achieve mutual understanding.
To accomplish this, geospatially referenced assets were tagged with relevant metadata to supplement the collective understanding of asset allocation, emergency vehicle location and building details. Multiple instances of TouchShare and ArcGIS software on desktops, laptops and other devices used by the Civil Protection team allowed details to be shared regardless of a user’s geographic location. This meant that separate groups of users could see, interact and share the same data from disparate locations throughout the city. Coordinating in this collaborative, visual environment optimized precious emergency response resources, increasing capacity without requiring new infrastructure investment.
Tools like the TouchTable allow users to integrate databases, satellite images, computer-aided design files, real-time video and external links to data sources such as meteorological and seismological services. As a result, the users can analyze such data collaboratively before, during and after an event.

A Positive Outcome
Data gathered from Mexico City’s annual simulation improve response time by studying and using historical data to improve understanding and preparedness for future events. As a result, the Civil Protection team can predict likely danger zones that may affect future real estate and development and improve seismic building codes and geographical locations for new structures. In addition, in the event of a crisis, the Civil Protection team is able to better target populated venues and buildings based on location or temporal data, such as time of day or year.

As Mexico City officials continue to focus on maintaining a high level of preparedness for its citizens, hardware and software tools that facilitate more efficient collaboration between city officials and citizens will remain a critical piece of the solution. 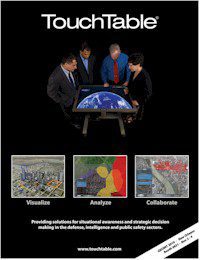