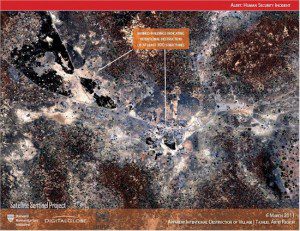 A satellite image of a village in Sudan from March 6, 2011, shows at least 300 structures burned, at least two-thirds of which appear to be for civilian use.

DigitalGlobe collaborated with the Satellite Sentinel Project, the brainchild of actor George Clooney, to deliver the first images and analysis of the evolving situation in Sudan, following the country's historic vote on independence in January 2011. According to DigitalGlobe Vice President Stephen Wood, the company's satellite constellation imaged nearly 750,000 square kilometers of Sudan in 30 days.
The imagery aims to shine a light on the area and deter the resumption of war between North and South Sudan. We are focusing on the areas along the border where the most likely conflicts may occur, explains John Prendergast, co-founder of the Enough Project, an anti-genocide group and collaborator on the Satellite Sentinel Project. The idea is to monitor these hotspots and try to stop human rights crimes before they happen.

The Satellite Sentinel Project marks the first sustained, public effort to systematically monitor and report on potential hotspots and security threats along a border. Clooney conceived of the innovative project on Oct. 4, 2010, while on a fact-finding mission to southern Sudan with Prendergast. The project's funder, Not On Our Watch, co-founded by Don Cheadle, Clooney, Matt Damon, Brad Pitt, David Pressman and Jerry Weintraub, focuses global attention and resources toward putting an end to mass atrocities around the world.
To see the latest satellite images, read the analysis, and for more information or ways to take action, visit http://www.digitalglobe.com/ or http://www.satsentinel.org/. 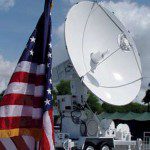 The Eagle Vision portable ground stations can be deployed in the field, so imagery can be downloaded in real time as a satellite passes over an area of interest.

The 2010 William T. Pecora Award, jointly presented by the Department of the Interior and NASA, was given recently to the Eagle Vision team, which has supported the advancement of Earth observations for the last 16 years. The program comprises five ground stations capable of downlinking real-time commercial satellite imagery from numerous Earth observation satellites to deliver timely images to support U.S. global crisis response. The ground stations are deployable worldwide to provide on-site support to crisis response.

The program was created in 1995 in response to the post-Desert Storm need for timely, unclassified imagery the U.S. military could share with its allies. Since then the program has aided natural disaster relief and humanitarian efforts, including fighting wildfires in California and relief efforts after Hurricane Katrina.

Outside the United States, the Eagle Vision team provided support to 19 different disaster events in six different countries during 2009. Two Eagle Vision units provided Haiti earthquake first responders with images within 24 hours of the quake. Units also were deployed to Africa between 2004 and 2007 to collect commercial satellite imagery of Chad, Mauritania, Uganda and Niger to build a broad-area geospatial library for humanitarian support.

A U.K.-led international consortium that uses satellite imagery to provide disaster mitigation celebrated its 10-year anniversary in February 2011. The Disaster Monitoring Constellation (DMC), a unique international partnership formed by national governments and organizations, recognized the need for coordinated satellite imaging campaigns to assess and mitigate natural disasters with more current and timely information a decade ago. The five consortium members each own an independent satellite, but they pool their resources to gather and distribute up-to-date images of disaster-stricken areas anywhere in the world.

By working together, the multisatellite constellation provided the unique capability to acquire satellite images of anywhere on Earth at least once a day. This makes it possible to provide recent high-quality images of an affected area within the critical days following a disaster, improving the accuracy of maps and emergency response plans.

DMC International Imaging was set up to coordinate disaster response and to distribute images. All of the DMC satellites were designed and built by Surrey Satellite Technology Ltd., a British space company that developed a new type of satellite that was smaller and more economical to launch than contemporary designs. As a result, consortium members have cost-effective sovereign remote sensing capability with shared ground segment, image processing and distribution functions. 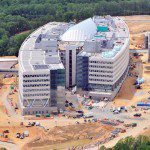 The campus was designed to facilitate greater collaboration within NGA and with mission partners and customers supporting the geospatial intelligence mission around the world. The campus will accommodate 8,500 people and allow for future growth. NGA's move to its new headquarters is being conducted in increments and will be completed in September 2011. 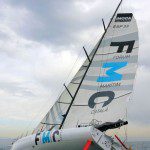 FÃ²rum MarÃ­tim CatalÃ , a 60-foot yacht that competed in the Barcelona World Race, was equipped with instrumentation to deliver near-real-time measurements of sea-surface temperature and salinity along the 46,300-kilometer route.

Competitors raced around the world from Barcelona, Spain, on a 46,300-kilometer route that took them through some of the most remote parts of the Southern Ocean. The Spanish Institute for Marine Science arranged for the FÃ²rum MarÃ­tim CatalÃ , a 60-foot yacht, to be equipped with a sensor to collect data on sea-surface temperature and salinity throughout the three-month race. The information was relayed by satellite back to the institute automatically in near-real time.

Launched in November 2009, the SMOS mission provides global measurements of soil moisture and ocean salinity to better understand the water cycle and to improve weather and climate models. Along with temperature, ocean salinity is a key variable that drives global ocean circulation patterns, which in turn play a role in moderating the climate. Accurate data on ocean salinity will provide a better insight into the processes influencing ocean currents.

The SWIR spectrometer will be used to measure carbon monoxide and methane in the atmosphere. The Sentinel 5 Precursor mission will provide a source of accurate and detailed data following the completion of ESA's Envisat mission. This will allow scientists to continue to study air quality and climate change until Sentinel 5 is launched in the next decade.

SSTL's Optical Payloads Group will coordinate an industrial consortium, including the Netherlands Institute for Space Research and Sofradir (France) to procure and integrate the precision remote sensing instrument.

A perspective view shows the western side of the volcanically active Kamchatka Peninsula in eastern Russia. The image was generated using the first data collected during the Shuttle Radar Topography Mission.