Google agreed on June 10, 2014, to buy Skybox Imaging, a provider of high-quality satellite images, as the technology giant continues its lofty ambitions for its Internet offerings.

Initially, Skybox will help improve Google’s dominant mapping service. But over time, the five-year-old start-up and its ability to launch relatively cheap satellites could aid a bigger Google goal: expanding its Internet service offerings. The tech titan already is exploring using other novel methods, including balloons and drones, to provide online access, especially to people in sparsely populated locations.

“Their satellites will help keep our maps accurate with up-to-date imagery,” a representative for Google said in a statement. “Over time, we also hope that Skybox’s team and technology will be able to help improve
Internet access and disaster relief—areas Google has long been interested in.” 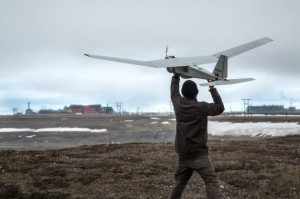 “These surveys on Alaska’s North Slope are another important step toward broader commercial use of unmanned aircraft,” said Transportation Secretary Anthony Foxx. “The technology is quickly changing, and the opportunities are growing.”

The Puma AE is a small, hand-launched UAS that is nearly five feet long and has a wingspan of nine feet. Using the information generated by the Puma’s sensors, BP hopes to target maintenance activities on specific roads and infrastructure, which will save time and support safety and operational reliability goals while helping to protect the sensitive North Slope environment.

The image on the left portrays soil moisture in southern Africa during mid-April 2014 and is based on rain gauge data only. The more detailed image on the right includes soil moisture data from ESA’s SMOS mission that are assimilated into USDA’s FAS forecasting system.

The European Space Agency’s Soil Moisture and Ocean Salinity (SMOS) mission has reached beyond its water cycle mission to predict drought and improve crop yield in regions prone to famine.

Through SMOS, the service obtains timely information on soil moisture patterns, which help to predict how the health of plants will change and, therefore, how productive they will be. Testing the SMOS readings for this purpose, the service received positive feedback from analysts in southern Africa. This is a challenging area because there has been little or no satellite imagery of the area, and there are few working rain gauges.

The Federal Aviation Administration announced on June 9, 2014, that the state of Nevada’s unmanned aircraft system (UAS) test site is ready to conduct research vital to integrating UASs into the nation’s airspace.

FAA granted the Nevada team a two-year Certificate of Waiver or Authorization (COA) to use an Insitu ScanEagle UAS at the Desert Rock Airport  in Mercury, Nev. Desert Rock Airport, owned and operated by the Department of Energy, is a private airport and not for general use. The ScanEagle will fly at or below 3,000 feet, monitored by a visual observer and mission commander. Initial flights will verify that a UAS can operate safely at the airport.

Nevada’s research will concentrate on UAS standards
and operations as well as operator standards and certification requirements. The site’s activities also will include a concentrated look at how air traffic control procedures will evolve with the introduction of UAS into the civil environment and how these aircraft will integrate with NextGen, the modernization of the national airspace system. 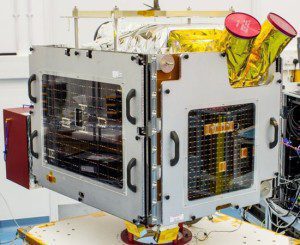 Weighing only 180 kilograms, KazEOSat-2 has the ability to image and downlink 1 million square kilometers per day, with exceptionally agile off-pointing capabilities for this class of satellite.

Surrey Satellite Technology Ltd. (SSTL) launched KazEOSat-2, a medium-resolution Earth observation satellite for the Republic of Kazakhstan, on June 19, 2014. The spacecraft was launched into a 630-kilometer sun-synchronous orbit on board a DNEPR rocket from Yasny in Russia.

KazEOSat-2 (formerly known as KazMRES) will deliver 77-
kilometer swath, multispectral images with 6.5-meter resolution for agricultural and resource monitoring, disaster management and land use mapping. The spacecraft
is the medium-resolution element of a civil space remote sensing system that also includes a high-resolution satellite, KazEOSat-1, built by Airbus Defence and Space. 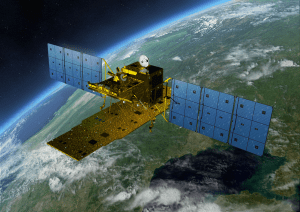 ALOS-2’s SAR sensor has a spotlight mode (1 to 3 meters) and a high-resolution mode (3 to 10 meters) that will provide more detailed data than its predecessor, ALOS.

Japan successfully launched the Advanced Land Observing Satellite-2 (ALOS-2) on May 24, 2014. A Mitsubishi Heavy Industries’ H-IIA rocket was used to launch the 2-ton radar imagery satellite from a space center on the island of Tanegashima.

ALOS-2 will be used to survey damage from natural disasters and changes affecting rainforests. The satellite will be able to see scars left by catastrophes such as Japan’s 2011 tsunami as well as monitor progress made in reconstruction, according to officials from the Japan Aerospace
Exploration Agency (JAXA). Nicknamed “Daichi-2,” the satellite contains a 1.2-GHz (L-band) synthetic aperture radar (SAR) sensor that will provide valuable data for Japan, which sits on the Pacific Ring of Fire and experiences 20 percent of all major earthquakes. 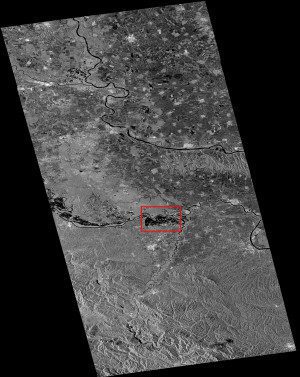 This radar image is a Sentinel-1A satellite scan from May 24, 2014, over parts of Serbia, Bosnia-Herzegovina and Croatia. The area used for the flood delineation mapping under the Copernicus EMS is indicated in the red box.

Although not yet operational, the European Space Agency’s new Sentinel-1A satellite has provided valuable radar data for mapping the spring floods in Bosnia and Herzegovina.

Heavy rainfall leading to widespread flooding and landslides hit large parts of the Balkans in May 2014, killing dozens of people and leaving hundreds of thousands displaced. Jan Kucera of the European Commission’s Joint Research Centre is supervising the technical aspect of the Copernicus Emergency Management Service (EMS). While mapping the flooding in northeastern Bosnia and Herzegovina, the European Space Agency delivered a radar scan from Sentinel-1A.

“I had a first look and discovered that we were missing an important flooded area visible in the middle of the image,” said Kucera. “In emergency situations like these, it is important that we optimize all the available data to produce better maps for disaster relief efforts.”