Astrium is speaking to countries outside Europe, including Singapore, about partnering to develop GO-3S, the company’s new geostationary Earth observation (EO) satellite.

Gregory Pederson, Astrium sales and marketing director, says the 10-meter-long, 4.9-ton GO-3S will cover about one-quarter of Earth’s surface. It will have a 4-meter mirror that can observe a 100- x 100-km (60- x 60-mile) sector, with 3-meter resolution and a picture rate of five images per second.

Astrium is seeking outside partners to help bankroll the effort. “We are looking for partners and investors in starting the project,” Pederson told Aviation Week on the sidelines of the recent Global Satellite & Technology Convention in Singapore. “We’ve already invested research and development money into this.”

According to Pederson, any country that invests in the program will get a dedicated capacity and share of revenue from services derived from the satellite. Because the satellite will be designed to follow Earth’s rotation, it can provide 14 hours of uninterrupted coverage per day or for as long as there is daylight. 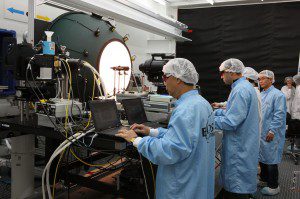 ESA is developing the two-satellite Sentinel-2 mission for Europe’s Global Monitoring for Environment and Security initiative. With the first satellite slated for launch in 2014, the mission is dedicated to supplying multispectral, high-resolution optical images for monitoring changes to the landscape, forestry and agriculture as well to support emergency efforts in response to natural and manmade disasters.

Said Sentinel-2 Project Manager Francois Spoto, “Thanks to the cooperation between the two agencies, we are aiming to improve the interoperability of the three satellites, reducing the average revisit time to just three days over the equator and generate comparable data products.”

Following the first round of LDCM calibration activities carried out by NASA engineers, the NASA team went to France to work with an Astrium team responsible for the industrial development of the Sentinel-2 multispectral sensor. Upcoming on-orbit comparisons will allow the scientific community to use data from the missions’ instruments synergistically, without having to compensate for their differences. 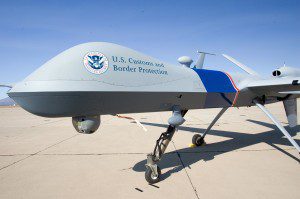 U.S. Customs and Border Protection already uses drones along the U.S.-Mexico border, and the FAA has granted several hundred permits to universities, police departments and other government agencies to use small, low-flying drones.

A future in which drones are as common in U.S. skies as piloted helicopters and airliners is a step closer with a government request for proposals to create six unmanned aircraft system (UAS) test sites around the country.

The Federal Aviation Administration (FAA) made the request on Feb. 14, 2013, kicking off what is anticipated to be an intense competition among states hoping to win one of the sites. FAA also posted online a draft plan for protecting citizens’ privacy from the eyes in the sky. The plan would require each test site to follow federal and state laws and make a privacy policy publicly available.

Privacy advocates worry that a proliferation of drones will lead to a “surveillance society” in which the movements of citizens are routinely monitored, tracked, recorded and scrutinized by the authorities. Potential civilian users are as varied as the drones themselves. Power companies want them to monitor transmission lines. Farmers want to fly them over fields to monitor crop conditions, and ranchers want to use them to count livestock. Film companies want to use drones to help make movies, and journalists are exploring their newsgathering potential.

FAA plans to begin integrating unmanned aircraft starting with small drones weighing less than about 55 pounds. The agency forecasts an estimated 10,000 civilian drones will be in use in the United States within five years. The agency is required by a law enacted a year ago to develop sites where civilian and military drones can be tested in preparation for integration into U.S. airspace that’s currently limited to human-occupied aircraft.

The law also requires FAA to allow drones wide access to U.S. airspace by 2015, but the agency is behind schedule. The test sites are necessary to evaluate what requirements are needed to ensure that drones don’t collide with conventional aircraft or other drones or endanger people or property on the ground. 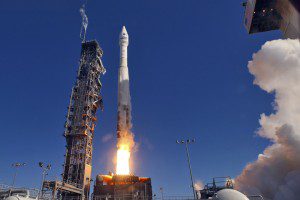 An Atlas V rocket carrying the LDCM satellite successfully lifted off from Vandenberg Air Force Base in California.

At 1:02 p.m. Eastern Standard Time, an Atlas V rocket successfully carried the LDCM satellite into orbit from Vandenberg Air Force Base in California. Following separation from the launch vehicle, the first signal was received 82 minutes after liftoff at a ground station in Svalbard, Norway. LDCM is expected to reach a sun-synchronous polar orbit of 438 miles (705 kilometers) above Earth by April 2013.

TIRS will collect data on heat emitted from Earth’s surface in two thermal bands, as compared with a single thermal band on previous Landsat satellites. These thermal band observations are vital to monitoring water consumption, especially in arid regions.

One of LDCM’s predecessors, Landsat 5, recently set a world record for the longest-operating Earth-observing satellite. Launched on March 1, 1984, the workhorse satellite watched over Earth for 28 years and 10 months—nearly 10 times its expected lifespan. Time ran out for the tenacious spacecraft when NASA and the U.S. Geological Survey (USGS) announced in December 2012 that it would be would be decommissioned, finally going silent on Jan. 6, 2013.

Landsat 6 failed upon launch in 1993. Landsat 7 has been in orbit for nearly 14 years, with its fuel running low and its eyesight partially impaired, so LDCM’s successful launch is welcome news to the scientific community. Mission managers intend to rename the satellite Landsat 8 after it’s fully checked out and handed over to USGS for operation later in 2013. Data will be archived and distributed free over the Internet from the Earth Resources Observation and Science Center within 100 days of launch.

The launch was streamed live online by amateur observers, but there was no official webcast provided by the Japanese government or Mitsubishi Heavy Industries, the rocket’s commercial operator. Two payloads were aboard the H-2A rocket: the country’s fourth radar reconnaissance satellite and a demonstration craft with an optical camera, according to the Japan Aerospace Exploration Agency (JAXA).

The radar-equipped satellite can take pictures of the ground day and night and in all weather conditions. Japan hasn’t disclosed the satellites’ exact capabilities, including their imaging resolution. The most advanced Japanese reconnaissance satellites likely provide imagery with a resolution less than 1 meter.

Overseeing a Stable of Satellites 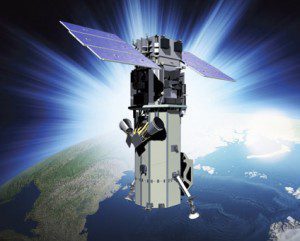 Following its merger with GeoEye, DigitalGlobe will finish building the GeoEye-2 satellite, then preserve it as a spare. Meanwhile, the company’s WorldView-3 satellite remains on track for a 2014 launch.

DigitalGlobe plans to complete WorldView-3 on its original schedule to be ready for a mid-2014 launch to meet the requirements of its EnhancedView contract with the U.S. government. That contract calls for completion and launch of WorldView-3, which will offer the most spectral diversity available commercially and be the first satellite to offer multiple short-wave infrared bands that allow for accurate imaging through haze, fog, dust, smoke and other airborne particulates. DigitalGlobe’s largest customer, the U.S. National Geospatial-Intelligence Agency, recently confirmed the requirements of DigitalGlobe’s EnhancedView contract remain unchanged.

How and why did the collision happen? If NORAD, the U.S. Air Force’s Space Surveillance Network, NASA’s Orbital Debris Program Office and other entities are tracking space debris, did anyone know the collision was going to occur?

Those who analyze data and track satellites say predicting collisions is difficult because of changes in satellite orbits that occur due to solar radiation and the gravitational effects of the moon and Earth. Therefore, the orbit analysis is only as good as the data, which may be imprecise.

Before the collision, another collision event happened in 1996, when a French spy satellite called Cerise was severely damaged by a piece of debris from the rocket that launched it. The United States tracks debris or micro-meteorites down to 10 cm wide, but objects as small as a scrap of peeled-off paint can pose a threat once they start hurtling at orbital speeds through space. Read more about space debris and human spacecraft from NASA at www.nasa.gov/mission_pages/station/news/orbital_debris_prt.htm.