Scientists using NASA satellite data and climate models say drier conditions likely will cause increased fire activity acrossthe United States in coming decades. Other findings about U.S. wildfires, including their amount of carbon emissions and howthe length and strength of fire seasons are expected to change under future climate conditions, also were presented at theannual meeting of the American Geophysical Union in December 2012.Doug Morton of NASA’s Goddard Space Flight Center, Greenbelt, Md., presented the new analysis of future U.S. fireactivity. The analysis was based on current fire trends and predicted greenhouse gas emissions.Results suggest fire seasons will be longer, stronger and more frequent across all regions of the United States in the next 30-50 years. Specifically, high fire years like 2012 likely would occur two to four times per decade by mid-century instead of onceper decade under current climate conditions.

Changes in ice sheet thickness per year in Greenland (top) and Antarctica (bottom), shown in dark red, depict a thinning of about 50 cm per year, while purple areas experience a thickening of about 20 cm per year

After two decades of satellite observations, an international team of experts has produced the most accurateassessment to date of ice losses from Antarctica and Greenland.

The study, a joint effort between the European Space Agency (ESA) and NASA, finds that the combined rate of icesheet melting is increasing. The 47 experts combined observations from 10 different satellite missions to reconcile thedifferences among dozens of earlier ice sheet studies and produce the first consistent measurement of polar ice sheetchanges.

The new research shows that melting of the Antarctic and Greenland ice sheets has added 11.1 mm to global sealevels since 1992. This amounts to about 20 percent of all sea-level rise over the survey period. About two-thirds of the iceloss was from Greenland, and the remainder was from Antarctica.The study also shows that the combined rate of ice sheet melting has increased over time and, altogether, Greenland andAntarctica are now losing more than three times as much ice—equivalent to 0.95 mm of annual sea-level rise—as theywere in the 1990s, equivalent to 0.27 mm of annual sea-level rise. 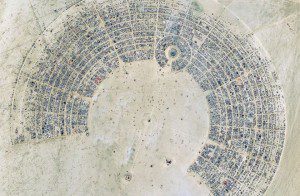 DigitalGlobe announced that an Aug. 28, 2012, WorldView-2 image of the Burning Man festival in Nevada is the winner of the company’s TopSatellite Image of 2012 contest. After a close race with a media-favored image of Mt. Fuji, Japan, the Burning Man image had a late surge in thesecond round and clinched the win with the most votes on DigitalGlobe’s Facebook page. 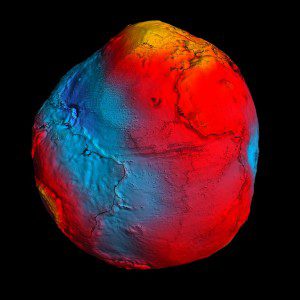 The Gravity field and steady-state Ocean Circulation Explorer (GOCE) satellite has been orbiting Earth since March 2009,reaching its ambitious objective to map our planet’s gravity with unrivalled precision. Although the planned mission is complete,fuel consumption was much lower than anticipated due to low solar activity during the last two years, enabling the EuropeanSpace Agency (ESA) to extend GOCE’s life and improve the gravity model.The satellite already was flying in an extraordinarily low orbit of 255 kilometers, about 500 kilometers lower than most Earthobservation satellites. Based on a clear preference from the GOCE user community, ESA’s Earth Scientific Advisory Committeerecommended lowering the orbit even further to 235 kilometers. This maneuver increases the accuracy and resolution ofGOCE’s measurements, improving our view of smaller ocean dynamics such as eddy currents. ESA began the process inAugust 2012, lowering GOCE by about 300 meters per day.

exactEarth added exactView-1 (EV-1) into its commercial service in November 2012. EV-1 is exactEarth’s mostadvanced automatic identification system (AIS) satellite, bolstering the ability of users to identify, track andcommunicate with vessels at sea for improved navigation, traffic control and safety.Launched in July 2012, EV-1 performance has exceeded industry expectations, according to exactEarth, with dailydetection rates consistently reaching 45,000 Maritime Mobile Service Identity numbers, increasing the totalexactAIS Premium global AIS service toapproximately 90,000 unique numbers each day.exactEarth will expand its constellation in the nearfuture with advanced AIS receivers on the Canadian M3M satellite and the Spanish PAZ radar satellite,both of which will launch in 2013. 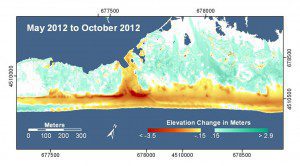 LiDAR technology uses lasers to measure elevations in a specific distance/area. Researchers used the LiDARdata, collected during an airborne survey, to construct a high-resolution 3-D map of before- and after-stormconditions.

Explains Hilary Stockdon, a USGS research oceanographer, “This work can help coastal communities understandwhere they are most vulnerable to future storms and help decision makers at all levels create policies that protect theireconomic, environmental and ecological health in the coastal areas most susceptible to extreme storm impacts.”

A 5-year grant worth $3.5 million from the NASA program Making Earth System Data Records for Use in ResearchEnvironments was awarded recently to a U.S. Geological Survey led, multiagency team of scientists studying future globalfood security. The proposal was one of 27 awardees. 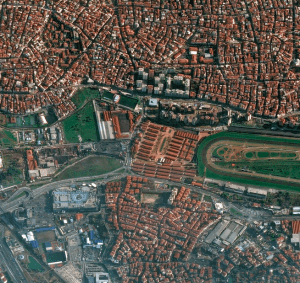 The Pléiades 1B satellite acquired this pan-sharpened, 50-cm-resolution image of Istanbul on Dec. 5, 2012, during its commissioning phase.

Just days after its successful launch, the high-resolution sensors on the French Pléiades 1B Earth observationsatellite collected amazingly vivid Earth images. The satellite was launched on Dec. 2, 2012, to join its twin Pléiades 1Asatellite in phased orbit.

The Pléiades 1B launch marks the third step in the formation of a constellation of four satellites, combining a doubledaily revisit capability and a range of resolutions. Beginning in 2014, with the launch of the SPOT 7 satellite, theconstellation will be complete, comprising Pléiades 1A and Pléiades 1B, delivering 50-cm imagery products, and SPOT6 and SPOT 7, which are designed to assure continuity of SPOT 5 service with 1.5-meter data products. SPOT 6 waslaunched on Sept. 9, 2012. Astrium Services is the exclusive distributor of data and geo-information products from theconstellation.

A new sole-source contract that could approach a half-billion dollars offers the latest insight into the U.S. Customsand Border Protection’s vision for its controversial drone program.

The border agency has locked in a five-year deal with a San Diego-area aeronautical company estimated to beworth as much as $443 million, according to a document posted Nov. 1, 2012, on the federal government contractingopportunities website. An estimated $237 million of that would buy up to 14 drones and related equipment.Whether Customs and Border Protection will actually get the money to spend is another question. Congress hasn’tappropriated funding beyond the 10th drone the agency just received, which will fly from Cape Canaveral, Fla., and theagency hasn’t asked for any more for the 2013 fiscal year.