October 17, 2013
Making Discoveries in Virtual Worlds Via the Cloud

Socrates expressed the sentiment more than 2,400 years ago to “rise above the Earth, to the top of the atmosphere and beyond” to capture a full understanding of our world. However, it wasn’t until the turn of this millennium that humanity had the potential to make such global insights possible. That was when the ability to view multiresolution, 3-D views of Earth based on commercial satellite imagery became a reality through a variety of open-source geospatial tools, including digital virtual globes like Google Earth. 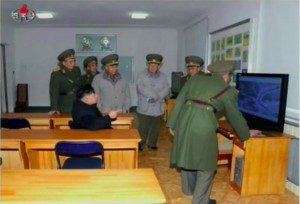 North Korean leader Kim Jong Un (seated) was shown an historical satellite image from 2005 on a large flat-screen computer monitor in the “Training Center” at the “Strategic Rocket Forces Headquarters,” according to North Korean National Television. Image analysts were able to locate the headquarters (see image below right) by comparing the computer monitor’s screen view with a Google Earth image.

Such democratizing digital geospatial applications have initiated a new era of global transparency. Now anyone with computer access instantly can travel, virtually, from a global view in space down to any point on the globe for a bird’s-eye view without the constraints of physical, temporal or political boundaries.

Users also can peruse recent and historical imagery archives of a chosen area for subsequent investigation. Moreover, in addition to built-in historical archive layers viewable with some virtual globes, commercial satellite imagery vendors have established Web-accessible “cloud services” that allow clients to instantly access entire libraries of high-resolution imagery from desktops, laptops and mobile devices around the world in formats that easily can be overlaid and viewed on virtual globes like Google Earth.

The headquarters image was tinted blue for better correlation.

Such digital globes promote global transparency by providing a new, essentially free way to conduct broad-area baseline searches either alone or with the help of open source leads, e.g., crowdsourcing. These new geospatial tools make it possible for anyone to conduct personal satellite-based reconnaissance for any application from the comfort of home or at any wifi-enabled coffee shop. Much of it can be done simply with a smart phone.

Digital globes provide accurate terrain mapping for better overall geospatial context and allow detailed 3-D perspectives of all sites or areas of interest, whether for remotely monitoring facilities or highly accurate geologic mapping. Indeed, such capabilities have led to the discovery of a previously unknown meteor crater in Egypt, ancient fortresses from lost civilizations in southern Libya, previously unknown and uncontacted tribes in the Brazilian rainforest, and predator/prey boundaries along the Great Barrier Reef.

With respect to global security applications, such capabilities have made possible a host of surprising discoveries in otherwise denied environments, with applications ranging from monitoring International Atomic Energy Agency safeguards and foreign conflicts to assessing environmental degradation and natural disasters. Even nongovernmental organizations are becoming increasingly active and adept in using such capabilities. For example, actor George Clooney’s Satellite Sentinel Project is fusing commercial satellite imagery with crowdsourced “analysis and advocacy” to “end genocide and crimes against humanity” in Southern Sudan.

Nick Hansen, a researcher at Stanford University’s Center for International Security and Cooperation (CISAC), using commercial satellite imagery of the Iranian missile and space launch complex at Semnan, Iran, was able to detect evidence of failed space launches of the Fajr satellite in May 2012 and again more dramatically in late September 2012 that went unreported by the Iranian government and the international media.

Similarly, on the basis of a cue from CISAC’s Jeffrey Lewis, it was possible to use Google Earth to precisely locate North Korea’s reported “Strategic Rocket Forces Headquarters.” Moreover, as shown in the images on page 8, confirmation of that location was made possible by correlating outdoor ground images of North Korean leader Kim Jong Un with what could be determined using Google Earth.

Image analysts were able to peer over the fence at North Korea’s nuclear test site in 3-D using Google Earth and SketchUp modeling tools (circa 2010), looking north past the Main Support Area toward the “West” Tunnel Portal used to conduct May 2009 and February 2013 underground nuclear tests.

The world recently witnessed a third underground nuclear test conducted by North Korea, which is poised for additional testing under the rubric of a resumption of nuclear weapons testing at a “higher level” than the two previous tests. However, the now near-ubiquitous availability of high-resolution commercial satellite imagery—sometimes multiple images daily—and its analysis posted worldwide permits anyone to peer over the fence and monitor ongoing activities in denied areas such as those now being undertaken at North Korea’s nuclear test site, and even do so from a 3-D ground-level perspective using Google Earth (see image at left).

Global transparency has become the new reality. Virtual worlds and access to Internet-enabled cloud services have made possible significant discoveries in science and global security by any motivated individual who simply has an interest doing so.