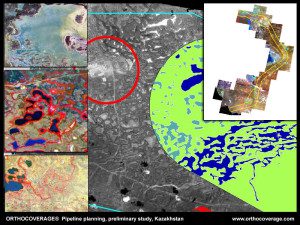 Satellite images are being used to study pipeline routing in Kazakhstan, a country that recently launched its first EO satellite

Virtually any business with assets that can be imaged and mapped will benefit from geospatial capabilities. There’s no more compelling evidence of this, however, than in the petroleum industry.

According to U.K. firm Exprodat, it’s generally estimated that more than 80 percent of the data used in the petroleum industry—from the initial opportunity analysis through the appraisal, production and abandonment phases—has a geospatial component. Even so, Exprodat and other firms specializing in this area believe that geospatial solutions for oil and gas (O&G) operations remain underutilized, as few firms are extracting the maximum value from their investment in geospatial data and analysis systems.

The use of Earth observation (EO) data and geographic information system (GIS) technology for petroleum applications accelerated during the 1990s as computer storage and speed better accommodated the industry’s massive datasets. The first Esri Petroleum User Group convened early in the decade, and many O&G firms began migrating from computer-aided design (CAD)-based systems to GIS technology.

The turn of the century gave rise to advances in Internet mapping, allowing more robust data distribution to a wider group of users. Today, cloud computing and powerful mobile devices have expanded the O&G geospatial user base even further.

For example, Boulder, Colo.-based Spatial Energy (recently acquired by DigitalGlobe) provided high-resolution imagery and digital elevation model (DEM) services to one of its O&G customers operating in a shale environment. According to Spatial Energy, the petroleum firm realized substantial savings on pad site and facilities surveying costs, as well as pad site construction costs. The firm’s return on investment for the imagery and DEMs was realized in less than two months of operations.

On Sept. 9, 2010, a 30-inch-diameter segment of a natural gas pipeline ruptured in San Bruno, Calif., creating a crater 26 feet wide and 72 feet long. A 3,000-pound section of pipe was found 100 feet from the crater. Gas spewing from the leak ignited, killing eight people, destroying 38 homes and damaging 70 more. It was discovered later that the pipeline owner failed to inspect nearly 14 miles of the pipeline for such leaks for nearly two decades. Why? Because it lost track of some 16 maps that were necessary to conduct federally mandated system inspections!

Beginning on page 12, this issue of Earth Imaging Journal presents a special O&G section, with three articles detailing the use of EO and related geospatial technology for the petroleum industry, including the use of satellite-derived bathymetry for offshore applications, DEMs for seismic planning and pipeline routing, and satellite imagery for emergency response in harsh environments.