Just 15 years ago, besides the familiar hurricane swirls and other weather-related phenomena, the average person had seen few, if any, images collected by an Earth observation (EO) satellite. Meanwhile, in relative obscurity, the scientific community was benefiting from a bonanza of incredible Earth imagery from the Landsat program, which launched its first satellite in 1972.

Space Imaging had a second bird waiting in the wings, however, and wasted no time deploying it. This time luck was on the industry’s side. On Sept. 24, 1999, IKONOS, the first commercial EO satellite, was launched successfully and in just a few days hit pay dirt—never before had the world seen such stunning images from space.

Fast forward to today’s satellites and the difference is dramatic. Airbus’s Pléiades satellites, working in constellation with its SPOT satellites, are rock solid, and the cutting-edge WorldView-3 satellite recently launched by DigitalGlobe is nothing short of remarkable. Orbiting the planet along with these elite optical-sensor satellites are the active-sensor radar satellites that collect Earth imagery in conditions when nothing else can. Additionally, several companies are building and launching cheaper, smaller optical EO satellites, often called cubesats or smallsats. Google, having purchased Skybox
Imaging, is one such company.

Highest and Best Use

Borrowing this concept from the real estate industry, I look back at the last 15 years and ponder the “highest and best use” of EO imagery, and I think about the humanitarian benefits and global transparency it creates. For instance, nearly real-time, detailed images of a major disaster nearly anywhere on Earth now is possible with today’s multinational aggregate of high-resolution EO satellites. Humanitarian atrocities now can be detected and documented from space, something that would’ve taken months or longer to discover in the past. With such transparency, no longer can rogue governments hide behind their borders. 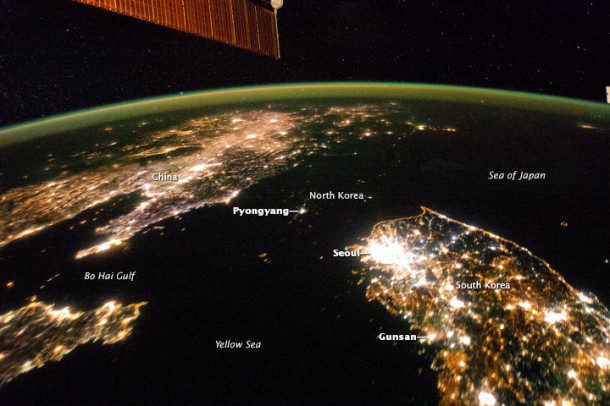 Speaking of rogue governments, at press time the question remained, “Where is North Korea dictator Kim Jong-un?” Perhaps a better question is, “Where is North Korea?” I leave you with one of my favorite EO images—a striking example of how one picture truly can say a thousand words. In this case, the eerie image seems to personify North Korea’s insulation from the rest of the world as its people struggle under the country’s dark rule. Taken by an astronaut aboard the International Space Station, at first glance you notice the typical city nightlights of China and South Korea, but it appears there’s a strange dark body of water connecting the Sea of Japan with the Yellow Sea. Look closer and you’ll see the dark patch actually is an isolated North Korea, as if quarantined from light.