It’s hard to believe a year has passed since the launch of Landsat 8. On Feb. 11, 2013, NASA launched the Earth-observing satellite from Vandenberg Air Force Base in California. The launch went perfectly, and 100 days later NASA transferred operational control to the U.S. Geological Survey (USGS).

Landsat 8 then joined its predecessor satellites to provide a continuous record of change across Earth’s land surfaces since 1972. Orbiting about 440 miles (705 kilometers) above Earth, Landsat satellites document natural processes such as volcanic eruptions, glacial retreat, floods and forest fires as well as human-induced processes such as urban expansion, crop irrigation and forest clear-cutting.

Landsat 8 is acquiring around 550 images per day—significantly more than the 400-image-per-day design requirement. Between Landsat 7 (launched in 1999 and still active) and Landsat 8, nearly 1,000 images per day are being collected. This is almost double the imagery collected three years ago, when Landsat 5 and 7 were operating together. Landsat 8’s ability to image more frequently in persistently cloudy areas (e.g., humid tropics, high latitudes) is improving data collection in areas of critical importance for climate studies.

Landsat 8’s robust data processing system also enables images to be available for public use within five hours of their arrival at the USGS Earth Resources Observation and Science (EROS) Center in Sioux Falls, S.D. Since 2008, all Landsat data are free to all. Enhanced Landsat 8 data have found their way into a wide range of operational applications, including forest health monitoring by the U.S. Forest Service; burn severity mapping by the USGS, NASA and the National Park Service; and cropland mapping by the National Agricultural Statistical Service.

“Before launch, I stated that Landsat 8 would be the best Landsat satellite yet—and I think the first year has proven that,” said James Irons, Landsat 8 project scientist at NASA’s Goddard Space Flight Center. “Scientists are very pleased with the results. They can see more detail and can identify land cover more easily.”

In land cover classification tests, conducted by Curtis Woodcock of Boston University, the Landsat 8 classification results were 19.5 percent more accurate than those developed from Landsat 7. Australian researchers are finding that improved Landsat 8 data have enhanced their ability to identify and quantify areas of land degradation or improvement in the extensive Australian outback.

“Landsat 8’s geometric and geodetic accuracy is so good that USGS now has the means to use Landsat 8 data to significantly improve the geometric accuracy of the entire 4.6-million-image Landsat archive,” noted Tom Loveland, USGS-EROS senior scientist. “That’s a rare bonus—to be able to improve the historical record.”

With the help of Landsat 8’s thermal imagery, Ted Scambos and University of Colorado, Boulder, researchers found locations in eastern Antarctica that were several degrees colder than the -128.6 F (-89.2 C) record set in 1983. 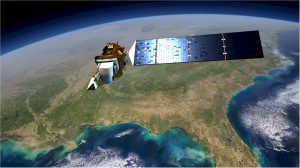 The Landsat 8 satellite images the entire Earth every 16 days in an 8-day offset from Landsat 7.

During the last 12 months, the USGS-EROS Center and NASA Goddard have worked in close collaboration—putting the new satellite through its paces by steering it into its orbit, calibrating its detectors, collecting test images and certifying the mission for sustained operation.

As partners in the Landsat program since its inception in the 1960s, USGS and NASA have distinct roles. NASA develops remote sensing instruments and spacecraft, launches the Landsat satellites and validates their performance. USGS then assumes ownership and operation of the Landsat satellites as well as managing ground-data reception and archiving, generating and distributing products.

“The Landsat archive, reaching back across four decades, provides an unprecedented record of land-surface change,” said NASA Goddard Center Director Chris Scolese. “The Landsat program’s success is largely due to the great partnership between NASA and USGS. Every day we’re building and strengthening that partnership, which will undoubtedly contribute to the success of future missions.”

There is, however, a bit of tweaking going on as Landsat calibration and instrument teams work to correct a few small issues. Landsat 8’s Operational Land Imager (OLI), for example, is composed of tens of thousands of sensitive detectors—so sensitive that tiny discrepancies are evident in Landsat 8 images of dark, uniform areas such as large expanses of water. The calibration team has made an overall improvement to the radiometry (color fidelity) of the OLI sensor’s bands to resolve the problem.

The satellite’s Thermal Infrared Sensor (TIRS) acquires two infrared bands. Both are being affected, to different degrees, by a stray light problem.

“Light from outside the area we’re looking at is getting into the telescope—it’s being reflected from something in the sensor itself, which is causing ‘ghosting’ in the images,” said Ron Morfitt, Landsat 8 calibration and validation lead. “To fix the problem, the calibration and instrument teams are scanning the moon, which is a very bright object with a very dark background, to try to find out exactly where the stray light is coming from. We’ll then build a filter to remove the ghosts from the images. It is a very novel solution.”

Landsat 8 and Landsat 7 also are being managed in a novel way, with the newer satellite being used to extend the capabilities—and lifespan—of the older one.

“Landsat 7 recently went to a continental landmass acquisition strategy,” explained Jim Lacasse, Landsat operations and maintenance project manager. “Capturing images of islands, for example, was very inefficient due to Landsat 7 scheduling constraints. The responsibility for capturing images of islands has been turned over to Landsat 8, with its much more sensitive sensor. The change helps to conserve the resources of Landsat 7 while still meeting our science goals.”

This change also has resulted in more data than anticipated being acquired by both satellites. Freed from routine acquisition of island images—as well as those of water, Antarctica and night scenes—Landsat 7’s output has increased from 375 to 438 scenes per day while at the same time prolonging the life of its Enhanced Thematic Mapper Plus sensor. Landsat 8 is also collecting more than its anticipated 400 scenes per day.

“We’re currently scheduling 550 images per day,” said Gene Fosnight, Landsat acquisitions director. “Landsat 8’s new bands and increased sensitivity make it particularly useful for dark objects like water and bright objects like snow and ice. We are acquiring those types of images at a higher rate than ever before. Landsat 8 is also cautiously beginning night-imaging campaigns of active volcanoes.”