I saw the power of GEOINT firsthand on my deployments to Iraq and Afghanistan. My unit, the 4th Engineer Battalion, conducted route clearance operations”finding deadly improvised explosive devices (IEDs) before they found us. We operated in Iraq in 2009 and in Afghanistan in 2009 and 2010. Because of our size and dispersal, our battalion intelligence section was unable to help everyone all of the time. Because virtually all deployed analysts work at brigade level or above, there's a resulting scarcity of GEOINT the closer one gets to the fight. However, warfighters below the brigade level need GEOINT capabilities as well.

Thanks to newly available GEOINT tools such as the Tactical Ground Reporting Network, Combined Information Data Network Exchange, GeoQuest and Google Earth, I analyzed, customized and personalized the intelligence I used with my platoon, preparing for the threats we faced, such as IEDs. We more efficiently searched for our enemy and targeted specific areas. The tools also gave us a limited ability to connect with other people working in our area and share impressions and trends in our enemies' behavior.

Leveraging these capabilities was far more difficult than was necessary. First, these tools are painfully slow; most required an application download every time we accessed them. Second, redundant reporting plagued the systems. This skewed searches for activity and wasted time. Third, incomplete information was plentiful, but comprehensive and useful information wasn't. Fourth, some of the best information was poorly or not at all captured because of difficulties in inputting data into the systems. These important losses meant that the fusion couldn't share the pieces that would most help others on the system. Fifth, these parallel systems communicate minimally and can't be searched in tandem. Moreover, because of the lack of interoperability, units often declare one system the unit's official system and post updates on one at the expense of the others. Finally, I lacked the understanding of other tools I could leverage to give my unit a better picture of the battlefield. All these difficulties together turned a great idea into several splintered and cumbersome systems that failed to measure up.

As incredible as the capabilities of GEOINT are, they're currently neither meeting the needs of the end user nor living up to their potential. Deployed analysts from the National Geospatial-Intelligence Agency do amazing work with units but can't be everywhere. No one system fully meets the needs of junior combat leaders.

The tools are out there, but there's palpable disappointment in the ability to get that fused intelligence down to the lowest levels. We can neither afford unnecessary redundancy nor support programs that don't fulfill their intended purpose. A single system must assume the work and purpose that these disparate and duplicative programs currently occupy. Otherwise, we run the risk of losing all the value added in GEOINT-fueled intelligence fusion in the hands of the end users.

Enter the National System for Geospatial Intelligence (NSG), which manages GEOINT in all forms from cradle to grave. As the NSG's functional manager, NGA must bring the NSG together to cull the ineffective, disparate systems and promote a single, unified program that will better meet the GEOINT needs of our users.

The future of GEOINT lies in giving people access to do their own work in an online community environment. This community must allow users to tailor their products to their own needs and to connect and share work and ideas with similarly interested individuals.

Fortunately, a program that puts the ability to analyze and customize at the lowest level is already in line with NGA's goals. Unveiled at the GEOINT Symposium in 2010, NGA's vision is to Put the Power of GEOINT in Your Hands. By placing our focus on getting analytical abilities down to the end users, small unit leaders will be able to give their units a better appreciation of the battlefield without the in-depth training analysts undergo.

Tools that put GEOINT into the hands of the user are one way to improve that support. Three things stand out about such a course of action. First, it has the capacity to increase the pool of experts who participate in intelligence operations at a low cost to NGA and bring together these specialists to broaden and deepen our collective expertise. Second, implementing such a system will actually increase the intelligence that makes it into the hands of end users because it makes more and better intelligence available to more people.

Lastly, with proper system design, training and equipping, we may be able to scale back our forward commitment to some of our deployed operations. This direct, personal support was superior service, but with limited resources, we may not always be able to support everyone who needs it. However, with a better designed system that connects GEOINT to the end user, NGA may be able to mitigate some of those gaps (see Key GEOINT Components at bottom).

Pushing the ability to use GEOINT to the end user is a worthy ideal. This may mean letting some projects go and endorsing a new tool that some may see as a threat. Even with the benefits that a replacement promises”a better, unified GEOINT-based intelligence fusion system that replaces several stove-piped, inadequate systems”it may be difficult to bring everyone onto the same page. That's why NGA must fulfill its chartered leadership role as NSG's functional manager.

If it uses its influence responsibly, NGA can be a catalyst to bring everyone in the right direction. If not, we fail our users by arming them with a confusing array of systems that can't do what they need. Success will look like keeping the warfighter one step ahead of our enemies, and putting the power ofÂ GEOINT in their hands is a step in that direction.Â Â Â Â Â 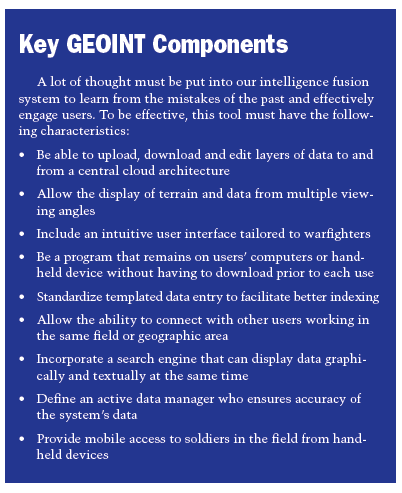