Despite the usefulness of technology, the human element remains vital to intelligence gathering, and the National Geospatial-Intelligence Agency (NGA) is exploring methods to tap into a broader knowledge pool.

Crowdsourcing could be the answer to capturing knowledge and expertise not organic to NGA. Put simply, crowdsourcing is the use of public talent, resources or expertise to support a project, often via the Internet and without compensation.

Using crowdsourcing in geospatial intelligence (GEOINT) isn't a new concept for NGA. At the In-Q-Tel CEO summit in March 2011, NGA Director Letitia A. Long addressed NGA's crowdsourcing aspirations, which are starting to become a reality.

There are tens of thousands of Â government consumers of GEOINT who can”and should”be in the middle of producing and delivering new, value-added content and analytical services”and sharing them with the community, said Long.

One example of crowdsourcing to support GEOINT is a joint project between NGA's Integrated Work Group-Readiness, Response and Recovery (IWG-R3), the Department of State's Humanitarian Information Unit in the Bureau of Intelligence and Research, and the Humanitarian OpenStreetMap Team.

At the request of the StateÂ Department, a lead federal agency, NGA, provides commercial imagery for use in the OpenStreetMap Tasking Manager, according to Katie Baucom, a GEOINT analyst. The OpenStreetMap project (www.openstreetmap.org) creates and distributes free geographic data for the world.

We just finished a project in a previously unmapped area of Uganda that produced high-resolution, structure-level data of two cities at no cost to the U.S. government in less than one week, said Baucom. Volunteers from all over the world traced features such as buildings, roads and landmarks. After that, local Ugandans added attribution to the data, such as road and business names.

Because the data are unclassified and shareable, they are used by the U.S. Agency for International Development, Red Cross and the United Nations for disaster preparedness projects. 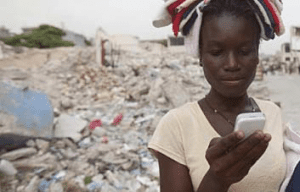 A Haitian woman uses a cell phone amidst the ruins caused by the 2010 Haiti earthquake. Crowdsourcing allows individuals, governments and other organizations to pose questions to large and varied groups and use the information provided voluntarily to obtain answers.

Many in the intelligence community are tracking new and emerging applications for crowdsourcing, especially to support human geography. One such emerging capability is MapStory (www.mapstory.org), which was created by Christopher Tucker, chairman and CEO of the MapStory Foundation. Tucker was the founding chief strategic officer of In-Q-Tel and serves as one of director Long's independent advisers.

Tucker introduced MapStory as a platform for crowdsourcing and storytelling within a spatiotemporal framework when he spoke at NGA as part of InnoVision's iTalks seminar. According to Tucker, MapStory is a website that enables a global community to contribute data within a mapping framework. It also helps to communicate important cultural dynamics through engaging and interactive maps that tell a story.

In intelligence work, it's important to verify and vet sources. GEOINT demands a high-attribution platform that enables structured dispute resolution. According to Tucker, in an open, collaborative environment, those in the community can fact check others' data and solicit information and ideas from the community to solve a problem or create a public database. This is the key benefit of crowdsourcing.

MapStory aims to exploit the blurring of lines between consumer and producer. This is the concept of such popular sites as Wikipedia, but Tucker makes a distinction.

MapStory is a new dimension to global data, empowering people to organize what they know about the world spatially and temporally, rather than encyclopedically, the way Wikipedia already empowers us to, said Tucker.Â

Editor's Note: Thanks to the NGA Pathfinder staff for their assistance with this column.