June 2, 2011
Unmanned aircraft systems are DoD’s deadly darlings, but how soon will friendly ones penetrate the civil market?

The mere words “Predator armed with Hellfire missiles” are enough to strike fear in the heart of any terrorist seeking refuge in the Afghanistan or Pakistan countryside. Stealthy and surgically precise, the Predator unmanned aircraft system (UAS) with advanced targeting capabilities is among the most feared weapons in the war against terror.

Thanks to aggressive adoption by the U.S. military during the last decade, UASs have swarmed the planet, and some experts predict there’s no end in sight. According to the Federal Aviation Administration (FAA), approximately 50 companies, universities and government organizations in the United States alone are developing and producing more than 150 unmanned aircraft designs. They may have wingspans as large as a Boeing 737 or smaller than a radio-controlled model airplane. Until now, the UAS primarily has supported military and national security efforts, but the FAA says that is rapidly changing.

Researchers at Teal Group claim that unmanned aerial vehicle (UAV) spending will more than double during the next decade. Current annual worldwide expenditures of $4.9 billion eventually will balloon to $11.5 billion a year, totaling more than $80 billion during the next 10 years. More than half the growth will come from the United States, followed by Europe and the Asia-Pacific region, with only modest participation by Latin America.

According to Colorado Springs-based research firm Market Intel Group, many nations have at least begun working toward manufacturing UAVs, but given the rapid pace of such work, which often is shrouded in secrecy, the picture can’t be 100 percent complete; it does, however, indicate a general trend toward technological sophistication or progress (Figure 1). 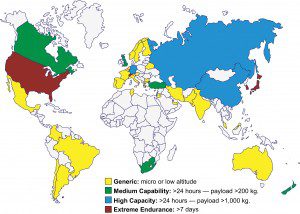 The number of drones employed by the Department of Defense (DoD) has shot up from fewer than 50 before 2000 to nearly 7,000 today, ranging from small hand-launched models to the larger, more exotic Predators, Reapers and Global Hawks with price tags in the tens of millions of dollars. The U.S. Air Force, which currently flies more than 40 UAS missions a day, is aiming for 65 daily missions by the end of fiscal 2013. So far, the superstar has been the Air Force’s Predator. Built by General Atomics and operational for 15 years, it was the first drone deployed following the 9/11 attacks. Predators currently log about 5,000 hours a week, approaching a combined 1 million hours of combat flight.

How valuable is such a weapon? On Aug. 24, 2010, at a ground-breaking ceremony at Southern California Logistics Airport for the Air National Guard’s first hangar designed specifically for drones, James “Snake” Clark, director of the Air Force Combat Support Office and deputy chief of staff for Air and Space Operations, told the crowd that of all the war machines deployed overseas, the enemy most fears the Predator and MQ-9 Reaper.

This fall, it only gets worse for the enemy. According to the Air Force, its new Gorgon Stare camera system will revolutionize how troops receive imagery in the field. The new full-motion video system, named after Gorgons—mythical creatures whose gazes turned enemies into stone—will debut aboard an MQ-9 Reaper, then possibly aboard the RQ-4 Global Hawk later.

Looking ahead, DoD UAS roadmaps extending out as far as 2047 call for aggressively exploiting such systems (Figure 2), including innovative future systems comprising UAVs that can refuel each other in flight, a UAS with global strike capabilities and a miniscule UAV small enough to fit in a soldier’s pocket. “The Air Force UAS Flight Plan” describes such a UAV as “game changing” and claims, “Development of the nano/micro [UAS] class will introduce capabilities never before realized—these include the ability to perform surveillance missions inside buildings and in confined spaces.” 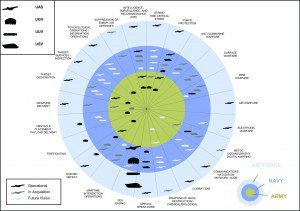 GAO: Not So Fast

Such prolific growth is bound to be accompanied by growing pains, as underscored by a General Accountability Office (GAO) March 2010 report concluding that the Air Force and Army don’t talk to each other enough while building their UAS fleets “… too fast to fully flesh out a game plan and coordinate efforts.” Air Force officials recently had to extend a job freeze for UAS operators through September 2011. The freeze was initiated in fall 2007 because too few airmen have been trained to fly a UAV (see “How Much Should Humans Matter?” below).

Among GAO concerns are inadequate airspace, personnel or aircraft to support UAV training; lack of backup satellite relays to support Air Force UAS missions in case of a disruption; simulators with limited capabilities, e.g., some that can’t replicate the system updates that are sent directly to combat troops in the field; and Army UAS operators in Afghanistan who are experiencing fatigue because they are overworked beyond prescribed levels.

Regardless, as military minds work through these concerns and continue to expand UAS capabilities, larger aerospace and defense companies are seeking to cash in on the bonanza, often by acquiring smaller UAS developers. During the last several years, the following deals were inked:

The Civil Market: Setting the Stage

On Aug. 2, 2010, outside Washington, D.C., a U.S. Navy MQ-8B Fire Scout UAV was 75 minutes into a routine flight when operators lost control. It flew on its own for 23 miles, at one point entering restricted airspace in the National Capital Region, before operators could regain control. It stands to reason that if the U.S. Navy can lose a UAV, so can anyone.

That scenario typifies just one of the FAA’s concerns as it struggles to craft guidelines for a coming wave of civilian UASs. The agency clearly defines its role—safety first. Key questions include:

To answer these questions, FAA created the Unmanned Aircraft Program Office (UAPO) and the Air Traffic Organization (ATO) to accommodate the introduction of UASs into the U.S. National Airspace System (NAS). The agency also is working with NASA, DoD and UAS manufacturers to ensure a coordinated effort.

NAS sees an average of 100,000 aviation operations a day, including commercial air traffic, cargo operations and business jets; and with as many as 238,000 general aviation aircraft in the system at any time, FAA’s chief concern is twofold—that a UAS doesn’t endanger other NAS users, nor compromise the safety of persons or property on the ground.

Currently, there are two ways to lawfully operate a UAS in the NAS. One is a Special Airworthiness Certificate-Experimental Category. Since July 2005, the agency says it has issued 71 experimental certificates covering 17 aircraft types.

The other option is a Certificate of Waiver or Authorization (COA). But according to several companies seeking COAs, this process moves at a snail’s pace. A company officer for one supplier of UAS military control systems eager to enter the commercial market laments that his company is at a standstill because he can’t get COAs.

Despite its safety concerns, the FAA is moving ahead, albeit cautiously. The agency is working with law enforcement agencies in Houston and Miami to identify the challenges of bringing a UAS into an urban environment and what types of operations can safely be conducted by law enforcement.

Additionally, the FAA operates its own UASs to help further its knowledge about these aircraft. AAI and General Atomics have provided simulators, while Insiturecently provided a ScanEagle system under a cooperative research and development agreement. The agency plans to issue a notice of proposed rulemaking covering UAVs weighing less than 55 lbs. by the first quarter of 2011.

When it comes to using a UAS for civilian tasks, applications are limited only by one’s imagination. In its “Civil UAV Capability Assessment” NASA lists 35 applications, ranging from coastal patrol and forest fire mapping to wildlife census and invasive plant assessment, which can benefit directly from a UAS. The agency flies its own UAS, the Ikhana, which it uses to conduct Earth science missions while demonstrating new and exciting UAS capabilities. (Figure 3). 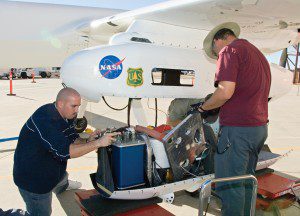 Meanwhile, civil UAS use is taking root in the United States and around the world. The U.S. Forest Service has been using drones for the last five years to help fight wildfires in the western United States. Researchers in Australia have used a UAS to monitor humpback whale and dugong populations. Farmers in South Africa are affordably surveying farmland with small UAVs. And at a July 2010 workshop hosted by the National Academies to discuss a vision for disaster response in 2020, some panelists said UAVs already have replaced satellites as the preferred platform for some missions, and their importance will continue to grow.
Once UAS technology advances to the point where it can sufficiently satisfy the FAA’s safety concerns, the door will swing wide open for commercial opportunities, and perhaps not just for the UAS as we know it today. Consider the possibilities for full-size piloted aircraft reconfigured to fly with UAS-type avionics. Imagine all the planes in the combined fleets of Fed Ex and UPS delivering packages autonomously—no pilots in the cockpits. It may just be a matter of time.