The program is being developed to respond to growing needs for high-quality topographic data and a wide range of other 3-D representations of natural and constructed features. 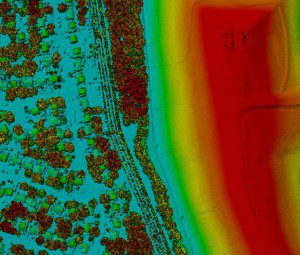 As the lead federal agency for terrestrial elevation data, U.S. Geological Survey (USGS) has managed the National Elevation Dataset (NED) and coordinated its activities through the National Digital Elevation Program (NDEP) for more than 15 years. During this time, NED, managed as part of The National Map—a collaborative effort of USGS and other federal, state and local agencies to improve and deliver U.S. topographic information—has represented the standard of quality for elevation data in the United States. 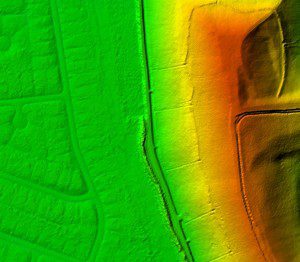 3DEP addresses a growing need for high-quality topographic data. The LiDAR classified point cloud and digital elevation model (DEM) above are of a residential community in Norfolk, Va. Trees and homes can be seen in the LiDAR image. The DEM is of the bare earth with trees and structures removed. The elevation is color coded by elevation, clearly showing an earthen flood control structure in red and the lower elevation residential streets in green.

Today, new elevation data are acquired using modern technologies to replace elevation data that are on average more than 30 years old. Through NDEP’s coordinated efforts, a project-by-project data acquisition approach has resulted in improved, publicly available data for 26 percent of the conterminous United States and 37 percent of Alaska during the last 13 years.

The 3D Elevation Program (3DEP) is a call for action to accelerate the collection of high-quality light detection and ranging (LiDAR) data in the conterminous United States, Hawaii and U.S. territories as well as interferometric synthetic aperture radar (IfSAR) data in Alaska. LiDAR and IfSAR data will be available for the nation, and NED will be completely refreshed with new elevation data products and services.

The USGS-led initiative includes federal agencies, states, and tribal partners working together to build on existing programs to complete national 3-D elevation data coverage in eight years. The 3DEP initiative is far reaching and strives to address national requirements through a partnership framework.

The governance structure includes an executive oversight committee and a multiagency coordinating committee built upon the committee structure already in place under NDEP. As proposed, a 3DEP effort would be supported at a total of $146 million annually. If fully funded, it is estimated that 3DEP could return more than $690 million annually in new benefits to the private sector directly and to citizens through improved government program services. Current investments in publicly available LiDAR and IfSAR data are approximately
$50 million annually.

The 3DEP initiative is based on the results of the National Enhanced Elevation Assessment (NEEA), which was funded by NDEP agencies and completed in 2012. The study, led by USGS, identified more than 600 requirements for 3-D elevation data to address the mission-critical requirements of 34 federal agencies, all 50 states and a sample of private-sector companies, tribes and local governments. As detailed in an NEEA report at http://nationalmap.gov/3DEP/neaa.html, many requirements were identified in which high-quality 3-D elevation products never would be affordable if the data were acquired to solely meet a specific need.

For example, the wind power industry requires volumes of high-quality surface data over large areas to plan wind farms and determine ideal placement of wind turbines. It would be costly for this industry to fund the acquisition of high-quality LiDAR data to solely support that purpose. Yet, when all of the overlapping needs from multiple users are considered, a national program is more than justified.

As highlighted in “3DEP Supports a Variety of Applications” at right, the NEEA study identified many applications that are similar to the wind energy example. In contrast, funding for data collection today comes from government agencies where mission-specific needs are driving data acquisitions. Although this data collection strategy has benefitted individual projects and government programs, it can’t comprehensively address the needs or achieve the benefits documented in the NEEA report.

In a resource-constrained environment, it isn’t feasible to rely only on increased funding to advance 3DEP’s goals. Improved program efficiencies and technology advancements to increase data collection rates also will be necessary. 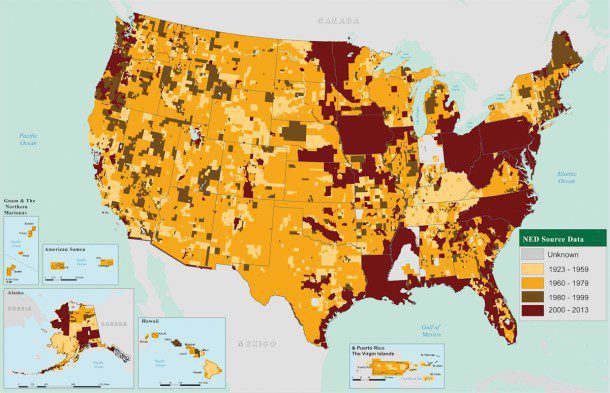 The National Elevation Dataset (NED) is maintained at multiple resolutions. Generally, digital elevation models (DEMs) are derived from LiDAR or IfSAR (Alaska) data after 2000. DEMs created prior to 2000 are from scanned USGS Topographic Map sheet contours. This NED status graphic is current as of December 2013.

The 3DEP initiative will achieve a 25 percent efficiency gain by moving toward larger projects in which data collection costs are inherently lower. To achieve this goal in eight years, however, investments and production rates will need to increase by threefold. To create the level of participation from cooperating agencies, and to ensure mission needs can be addressed, the initiative proposes to:

•    Increase overall investments through budget and other initiatives to provide greater incentive for increased partner engagement.

•    Assure that the mission needs of partner agencies and states are addressed by incorporating their requirements into a three-year joint planning strategy.

•    Encourage federal, state and tribal government participation through advantageous partnerships that adhere to accepted quality standards while recognizing the need for flexibility among partners.

•    Manage 3-D elevation data and make the data free for everyone.

The 3DEP initiative is designed to ensure the nation’s needs for highquality LiDAR and IfSAR data are being met.

USGS has been designated by the Office of Management and Budget (OMB) as the lead federal agency for terrestrial elevation data (OMB Circular A-16). The 3DEP initiative is designed to fulfill that coordination responsibility and to ensure the nation’s needs for high-quality LiDAR and IfSAR data are being met.

This role can’t be met by USGS alone, and the 3DEP initiative shouldn’t be considered to be solely a USGS activity. Partnerships with federal agencies, states and tribes are a cornerstone of the planning and initiative development process. USGS and the National Oceanic and Atmospheric Administration work together to conduct annual inventories of available LiDAR and IfSAR data.

Editor’s Note: Portions of this article originally appeared in ArcNews, spring 2014. To find out where LiDAR and IfSAR data are available, go to http://www.csc.noaa.gov/inventory. To download the most current digital elevation model data available from USGS, go to http://viewer.nationalmap.gov/viewer. To get involved, more information about 3DEP can be found at http://nationalmap.gov/3DEP.

3DEP Supports a Variety of Applicatons

3DEP will provide expanded benefits to a range of federal, state, local and private industry applications. Some examples of the value of improved elevation data include:

• The Federal Emergency Management Agency (FEMA) expects that a national enhanced elevation program could reduce the amount of time needed to update its flood maps. Such enhanced data could provide significant benefits to the communities and citizens that are customers of the National Flood Insurance Program. For example, updated information could be delivered to affected communities and homeowners more quickly.

• Using light detection and ranging (LiDAR) data, U.S. Geological Survey scientists discovered a surface rupture along the Tacoma fault in Washington state. This discovery led to a redesign of the structural elements of a $735-
million suspension bridge across the Tacoma Narrows. When LiDAR data enable the identification of active faults near major infrastructure, mitigation steps may be taken to avoid potential catastrophes.

• The Centers for Disease Control indicate LiDAR data provide significant benefits for occupational safety and health by enabling many tasks to be performed in an office environment that were previously performed in the field under dangerous or unhealthful conditions. For example, conducting land surveys during highway construction results in traffic deaths among surveyors each year. This hazard may be largely eliminated by the use of LiDAR-based surveys.

• Enhanced elevation data for Illinois would dramatically improve precision farming. A more accurate depiction of variations in local relief helps determine a more accurate rate for applying agricultural chemicals, thereby yielding a significant cost savings and reducing agricultural pollution. Approximately two-thirds of Illinois’ land area is devoted to agricultural uses. The value to U.S. farmers of public-domain LiDAR for all precision agriculture nationwide is believed to be potentially worth up to $2 billion annually.

• U.S. Environmental Protection Agency (EPA) environmental impact assessments (EIAs) depend upon accurate elevation data for vulnerability mapping and for estimating the threat of sea-level rise to human populations, infrastructure, the fish and shellfish industries, and the coastal environment. Credible EIAs can’t be performed without accurate LiDAR data. EPA estimates that billions of dollars would be saved by states, local communities and citizens because they may have accurate elevation data on which to base their sea-level-rise mitigation activities.

• In Alaska, poor-quality elevation data pose an ongoing threat to aviation safety. Improved elevation data for cockpit navigation and flight simulators may save lives each year by reducing accidents resulting from the inability to safely fly over obstacles in airspace.