January 24, 2012
Taking Operation IceBridge to the Next Level 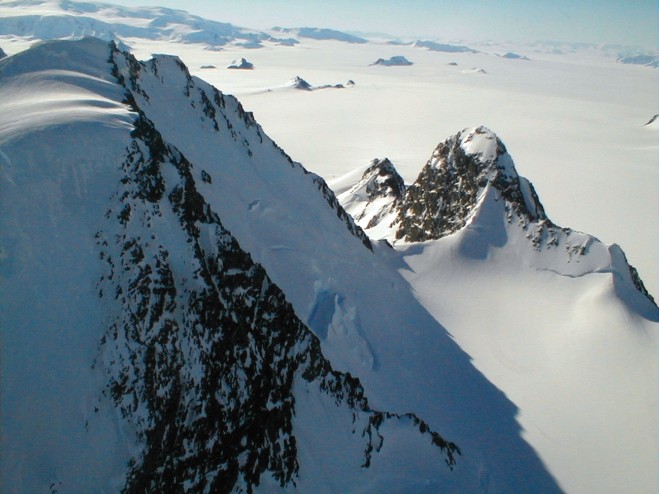 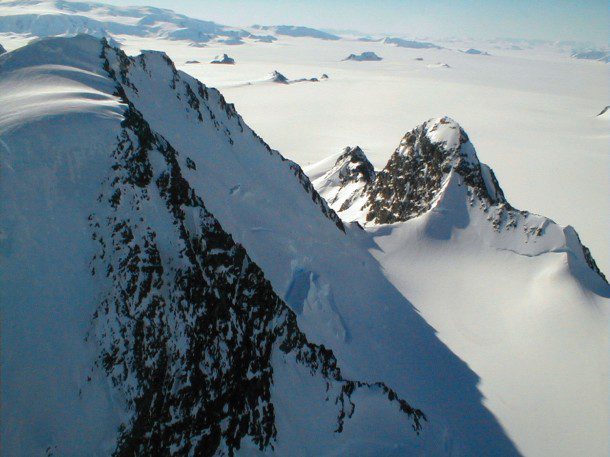 The frozen, inhospitable surface features of Alexander Island in Antarctica were viewed at close range during one of the final low-level flights by NASA’s DC-8 flying laboratory during the 2011 Operation IceBridge mission.

NASA’s flying science laboratory recently returned home to its base in Palmdale, Calif., after completing the Antarctic 2011 Operation IceBridge science mission. The IceBridge flight and science team flew a record 24 science flights aboard the DC-8 aircraft during a six-week campaign, recording data with a suite of sophisticated instruments on the thickness and depth of Antarctic ice sheets and glacial movement. 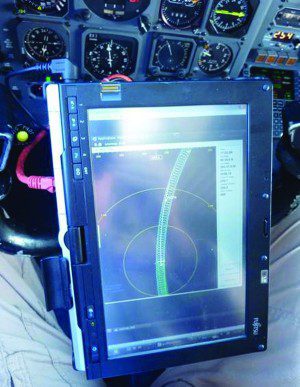 A pilot’s eye view shows the display from the Airborne Topographic Mapper, which allowed the DC-8 pilots to fly the exact route flown in earlier IceBridge missions and ensure that data collected can be compared with the previous years.

Operation IceBridge began in 2009 to bridge the data-collection gap between NASA’s failed ICESat-1 satellite and a new ICESat-2 satellite, which won’t become operational until 2016. ICESat-1 was turned off in 2009 when its last laser stopped working, so NASA turned to airborne sensors and set up IceBridge. The first series of flights over Antarctica began in 2009, and the team has flown annual campaigns over the Arctic and Antarctic ever since. By comparing the year-to-year readings of ice thickness and movement on land and sea, scientists can learn more about the trends that could affect sea-level rise and climate around the globe.

“IceBridge exists because we need to understand how much ice the Greenland and Antarctic ice sheets will contribute to sea level rise over the next couple of decades,” says project scientist Michael Studinger. “In order to do this, we need to measure how much the ice surface elevation is changing from year to year.”

According to Tom Wagner, NASA’s cryosphere program manager, a second major goal of IceBridge is to track how Arctic sea ice is changing, which will help scientists understand its critical role in climate and weather. 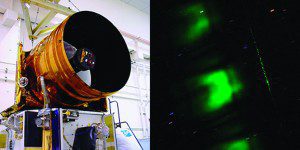 Such measurements began three decades ago with laser altimeters flown on airplanes and then expanded with the launch of ICESat in 2003. Its main instrument, the Geoscience Laser Altimeter System (GLAS), worked by sending out short pulses (40 per second) of green and infrared light. The light bounced off particles in the atmosphere or on Earth’s surface and returned to a 1-meter-wide telescope. The amount of light that returned, as well as the time it took to return, depended on the height of the surface that reflected it. For instance, high ice clouds reflected light faster than ice on the ground or ocean.

The measurements gave scientists a picture of the elevation of Earth’s ice sheets and the thickness of Arctic sea ice. Repeated measurements, year after year, completed the picture of how ice was changing and where the biggest changes were happening.

The laser altimeters on IceBridge—the Airborne Topographic Mapper (ATM) and the Laser Vegetation Ice Sensor (LVIS)—can measure the shape and height of the ice surface to within 10 centimeters. The ATM is similar to the ICESat laser altimeter and has been flown on Greenland surveys every year since 1993.

Getting to the Bottom of It

Knowing how much the elevation of the ice sheets has changed is valuable because it tells modelers how ice is evolving. This, in turn, allows them to estimate how much it has contributed to sea level rise. But it’s only part of the calculation.

Sophie Nowicki, a NASA scientist who builds computer models to study ice sheets and their impact on climate, points out a basic problem when trying to predict sea level rise: “We don’t know the full volume of the Greenland ice sheet or the Antarctic ice sheet. We are lacking a good knowledge of what the bed looks like beneath the ice sheet. And if I don’t know what the bed looks like, I don’t know how much ice there is. IceBridge is going to give us that.”

Each radar instrument mounted on IceBridge’s P-3 aircraft bounces radio waves of different wavelengths off the ice. Some penetrate the top layers, while others travel all the way to the ground before reflecting back to receivers on the plane.

“We get a complete picture of the ice from top to bottom,” says Studinger. “We see how much snow has been deposited on the surface. And we see all the way to the bottom of the ice sheet—three or four kilometers down—to internal layers that formed hundreds of thousands of years ago. That tells us what is happening in the ice sheets and how they flow into the ocean.”

“People have thought about flying something like IceBridge for 30 or 40 years,” says Eric Rignot of the University of California-Irvine and NASA’s Jet Propulsion Laboratory. “This top-to-bottom view is a game-changer. IceBridge will provide the critical data that we need to improve ice sheet models.”

Solving the thickness problem turns out to be important for land and sea ice. Unlike land-based ice, melting sea ice won’t contribute to sea level rise because the ice mass is already in the water. But understanding changes in sea ice is an important piece of the climate change equation.

Sea ice reflects light from the sun. As it disappears, darker, open water will absorb more heat in the summer, and sea ice will return more slowly in the winter. The additional heat in all seasons will moderate Arctic temperatures, and that will melt permafrost and change the Arctic landscape. 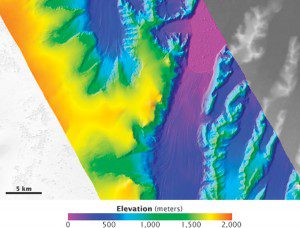 The Laser Vegetation Ice Sensor maps mountain ranges and glaciers with enough precision to show individual icebergs. This map shows the elevation of the Crane Glacier on the Antarctic Peninsula.

“The Arctic is now warming faster than the rest of the planet, probably because of the loss of reflective sea ice,” says Ronald Kwok, a member of the IceBridge science team from NASA’s Jet Propulsion Laboratory.

The changes will extend beyond the Arctic. “As you take the ice away, you will change North American weather patterns, but no one knows how,” says Wagner. “It’s possible that you could radically alter precipitation maps of the United States.” 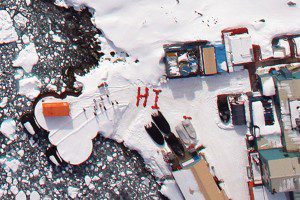 The Digital Mapping System camera captured this photograph of Palmer Station, Antarctica. Crew aboard NASA’s DC-8 saw this greeting from members of the station as the plane flew over the Antarctic Peninsula during Operation Ice Bridge in October 2009.

According to Kwok, sea ice is relatively fresh water. As it flows out of the Arctic and melts, it adds a layer of fresh water to the surface of the North Atlantic. The fresh water is less dense than salty water and may not be dense enough to sink, weakening the conveyor belt. To learn more, NASA uses sophisticated models that let researchers see the possible effects of the melting ice.

Bridging Polar Ice to the Future

Putting IceBridge measurements into small-scale models of single glaciers or sea ice prediction models is a first step toward improving global models that can predict sea level rise and climate change. To speed up the process, the IceBridge team did something unprecedented. 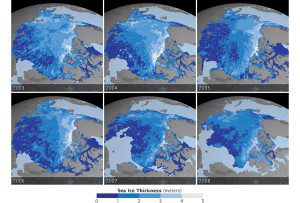 These maps show the thickness of Arctic sea ice during the autumn of each year from 2003 to 2008. IceBridge observations will help continue this series of measurements, which were begun by IceSat.

“We asked the community where to fly the airplane to make the models better,” says Studinger. The community responded with excitement and a bit of trepidation, according to Nowicki.

The collaboration has led to a new computer-based tool that tells mission planners where measurements are lacking and how much models will improve if they fly the plane over these locations. This allows planners to chart flight paths that will do the most to improve models.

“It’s the first time that an observation campaign has this kind of strong link with the modeling community,” says Nowicki, who represents modelers on the IceBridge science team.

The link to the modeling community will have ramifications long into the future. 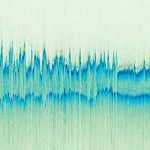 “In 2030, we’re going to have much more advanced computer models of the global climate and the ice,” says Wagner. “We’re going to need decades of data to test those models against. I’m hopeful that we’re collecting the right data sets so that 20 years from now, we’ve got a long enough record that we can use them to make accurate predictions about the future.”

“We feel pressure to come up with results, to find out what the ice sheets will do in a warming climate,” says Rignot. “The IceBridge mission is flying at a time when ice is changing faster than anyone thought it could, and change provides opportunity. We can learn a lot quickly because the system is changing so rapidly. We are in the golden age of glaciology, but we are also facing an immense challenge.”