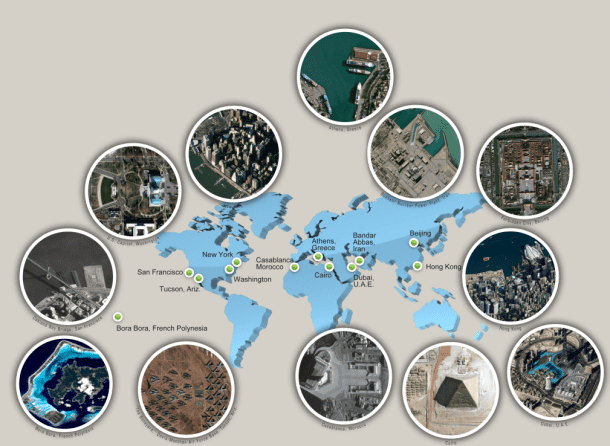 Pléiades 1, the first of a dual-satellite Earth observation system designed to deliver 50-centimeter color imaging products, was launched successfully on Dec. 16, 2011, from French Guiana aboard a Russian Soyuz rocket. The 970-kilogram satellite is the result of a decade-long effort by the French space agency (CNES) to develop one of the world’s most powerful and sophisticated Earth observation systems.

Back to the Beginning

It all began in 2001. The decision to set up the Pléiades program resulted from an in-depth study on the evolution of satellite imagery users’ needs. A cooperative program was initiated between France and Italy to develop Orfeo, a dual Earth observation system comprising six high-resolution satellites: four Cosmo-Skymed X-band satellites from Italy and two Pléiades optical imaging satellites from France. The system also will be used by Spain, Belgium, Sweden and Austria. 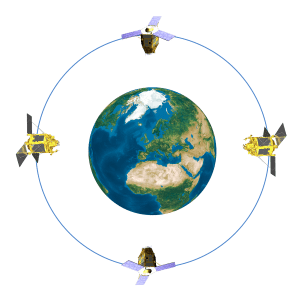 However, commercial and military users’ needs have broadened. They now also require images with increased resolution. The twin Pléiades satellites tie into this vision, adding local detail to SPOT’s synoptic picture. The system will deliver color imagery products with a resolution of 50 centimeters combined with a 20-kilometer swath—the widest in its class of optical submeter satellites.

Pléiades 1’s launch marks a new era of commercial operations for the European Space Agency, CNES and Arianespace, which jointly manage the Guiana Space Center, where the satellite was launched. Only three days after the launch, Pléiades 1 returned its first images. The moment when the first image is acquired by an Earth observation satellite is also when the on-board instruments and the ground segment are activated for the first time. The collection capability, which includes satellite tasking, image acquisition, data reception and pre–processing, is checked from end to end.

Pléiades 1 reached its final orbit in mid-January 2012. Astrium GEO-Information Services activated the tasking function. Now the satellite is well positioned to start releasing its first products. The commissioning phase will last until all parameters and processing elements have been fine-tuned and tested to reliably deliver high-quality images.

Pléiades 2 will join Pléiades 1 in the fourth quarter of this year, operating on the same orbit but phased 180 degrees from its twin. Added to their oblique viewing capability and exceptional agility, this orbit phasing allows the satellites to revisit any point on the globe daily—an ideal scenario for anticipating risks and managing crises effectively.

The Pléiades satellites’ gyros enable them to tilt quickly along and across track to image different areas of interest. Each satellite will be able to collect imagery anywhere within an 800-kilometer-wide ground strip, covering 200 kilometers in 11 seconds or 800 kilometers in 25 seconds, including stabilization time. That kind of performance results in a reduced average acquisition window for users, allowing more images to be collected during the same pass. Collection opportunities are more numerous, and conflicts among contiguous requests are minimized.

Such agility also will make it possible to image multiple targets (typically 15 targets over 1,000 kilometers within a corridor of +/- 30 degrees); collect large mosaics in a single pass (up to 100 kilometers by 100 kilometers in the same pass); conduct stereo and tri-stereo viewing for accurate 3-D applications; and support coastal, border or corridor surveillance to closely match any user’s needs.

The ground operations component also is organized with maximum responsiveness in mind. Work plans are uploaded to the satellite three times a day from three stations around the globe, making it possible to task requests up to two hours before a satellite pass. This reduces the lead time between tasking requests and image acquisition to a minimum. Customers with receiving stations configured for direct tasking will be able to refine tasking plans at the last moment (30 minutes prior to satellite arrival above the cone) according to the latest weather forecasts or emergency requests.

A lot of work has gone into designing image production systems. The fully automatic orthorectification process can generate a 20- by 20-kilometer color image in less than 30 minutes and a single-pass mosaic of 60 kilometers by 60 kilometers in two to three hours.

On the user side, everything from ordering to data delivery has been made as flexible and easy as possible. New acquisitions, catalogue data, subscription offers, online monitoring services and more mean that Pléiades 1 imagery is just a click away and ready to use.

The first of a new generation of satellites operated by Astrium Services, Pléiades 1 will be followed between 2012 and 2014 by SPOT 6, its twin Pléiades 2 and finally SPOT 7. As the end of service for the SPOT 5 satellite is scheduled for mid-2015, the question was raised about how to continue delivering the service SPOT 5’s users have come to expect.

This was the brief underpinning the design of SPOT 6 and SPOT 7. An in-depth market survey and careful canvassing of users’ expectations led to keeping SPOT 5’s best features, retaining its 60-kilometer swath, while improving agility and product resolution to 1.5 meters.

Astrium Services CEO Eric Beranger officially announced funding for SPOT 6 and 7 in June 2009. This is the first time in the remote sensing industry that a satellite has been built with entirely private funds, underscoring Astrium GEO-Information Services’ market confidence.

The two satellites are under development. Now the SPOT 6 optical instrument is coupled with the satellite platform. After a phase of mechanical and environmental testing, the SPOT 6 launch is scheduled for September 2012. SPOT 7’s integration also has begun, and the satellite will be ready for launch in the fourth quarter of 2013.

Built around similar architectures and phased on the same orbit, 90 degrees from each other, the four-satellite constellation of Pléiades 1, Pléiades 2, SPOT 6 and SPOT 7 will ensure even better responsiveness and availability of 50-centimeter to 1.5-meter products through 2023.