A Mediterranean pilot study validates the use of high-resolution satellite imagery for bathymetry and seabed classification.

Can high-resolution satellite imagery be used as effectively as waterborne methods for bathymetry and seabed classification? In summer 2012, the U.K. Hydrographic Office (UKHO) aimed to find out. UKHO wants to use such techniques for updating shallow-water and near-shore charts in remote areas more frequently and efficiently than relying on waterborne methods. 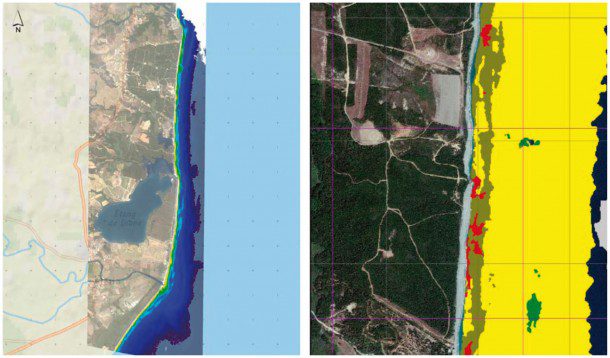 Two Mediterranean project sites, one comprising a 50-kilometer stretch of coastline (Area A) and another about half that size (Area B), were identified for the pilot. Per UKHO’s instructions, a Proteus-led team worked remotely with no access to horizontal and vertical ground-truthing data. The team wanted to achieve depths from the zero contour or surf zone to the maximum depth possible.

The project and the process incorporated DigitalGlobe’s WorldView-2 satellite imagery, which comprises data acquired with eight multispectral bands, including a coastal blue band (Figure 1). Although all eight bands are used for bathymetry and to determine seabed type, the coastal blue band, starting at 400 nm, significantly improved the technology for the hydrographic sector.

The team tasked WorldView-2 to capture new imagery for the two survey areas with a maximum incidence angle of 30 degrees off nadir, a key consideration for bathymetry applications. Suitable imagery also required minimal cloud cover and favorable environmental conditions, with little or no wind to minimize turbidity in the shallow waters near the shore. The satellite imaged a total coastline length of more than 100 kilometers in less than 10 seconds.

Imagery downloaded from the satellite within 24 hours of capture was delivered to EOMAP for processing. The imagery quickly was assessed for quality and suitability for hydrographic purposes. In this instance, excess cloud cover obscured the northern section of Area A, which required another image acquisition.

EOMAP has developed an in-house processing suite called the Modular Inversion and Processing (MIP) system, a proprietary program that extracts seafloor reflectance and converts it into water depth and seabed classification measurements. MIP is designed for the physical-based recovery of hydrobiological parameters from multispectral and hyperspectral remote sensing data. The program is used to map shallow and deep inland waters, coastal zones and wetlands. 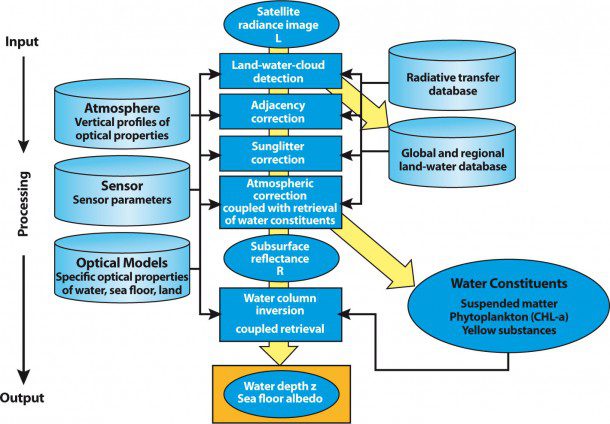 The flow line incorporates several correction factors. The multispectral signals are subject to refraction and absorption through the atmosphere and water column. These parameters need to be accounted for to establish a sea-floor reflectance value before converting reflectance into depth and seabed classification data.

The bathymetry processing flow line is sensor independent, allowing the use of different hyperspectral and multispectral imagery. WorldView-2 multispectral imagery has 2-meter resolution, and the eight-band imagery provides better vertical accuracy and depth penetration than other satellite imagery sources. 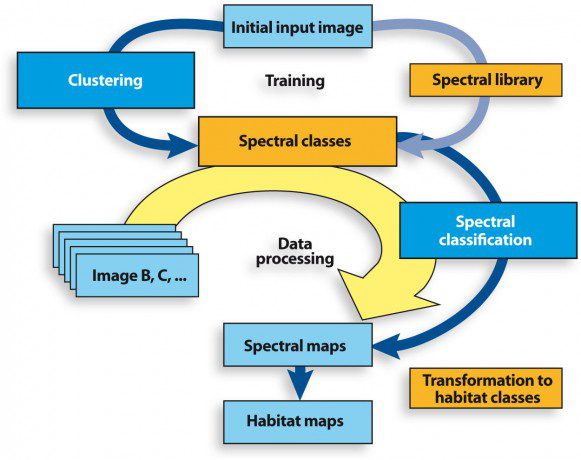 In contrast with the land classification, the satellite input image was corrected for atmospheric influences as well as the effects of sun reflectance on the sea surface and water column. EOMAP developed this unique semi-automatic approach and implemented it in MIP. The program processed radiance satellite imagery and output a bottom reflectance image that represents the reflectance of the sea-surface bottom without the effects of the water column and atmosphere (Figure 3).

Bathymetry covered nearly 100 percent of the sea floor. Objects larger than 4 meters were detected and mapped. Despite the lack of ground control, vertical accuracies were 10 percent to 15 percent of water depth. A positional accuracy of 10-meter circular error probable (CEP) 90 percent was achieved. However, adding a small amount of ground-truthing data would have improved accuracy to 10 percent of depth and achieved 6.5-meter 90 percent CEP.

A crucial metric used in judging the pilot’s success was timeliness. The entire project, even with the need to reacquire some imagery, was completed in eight weeks. The same project would have taken months with traditional acoustic hydrographic surveys, which can be dangerous in the Mediterranean’s shallow, near-shore environment.

Project participants learned that using multiple satellite images would increase the point density and allow the creation of a shoal bias product. While adding to the product’s cost, such an approach increases the safety element for survey or engineering applications. An average depth value is suitable for environmental/engineering and marine resources planning applications, but some advanced applications would require a shoal depth.

In addition, participants discovered that stationary surface objects provide valuable information, but moving objects, such as vessels, should be removed from the bathymetry and reported separately. Also, because satellite-tasking parameters are location and time dependent, they’re important for survey planning and should be considered when trying to produce the highest degree of vertical accuracy.

Without the use of ground control data for horizontal and vertical referencing—as dictated by the project guidelines—the results were reliable and consistent to about 11-meter water depths throughout all the areas of interest where environmental conditions allowed. Quality mapping is an essential deliverable for users when viewing and working with the deliverables.

For survey reconnaissance and survey planning, the technique employing DigitalGlobe’s satellite imagery delivered results good enough for serious consideration as a rapid alternative to airborne and waterborne survey techniques in many environments. Being able to survey large-volume areas quickly and remotely is a safe, cost-effective solution, offering considerable advantages compared with traditional methods.