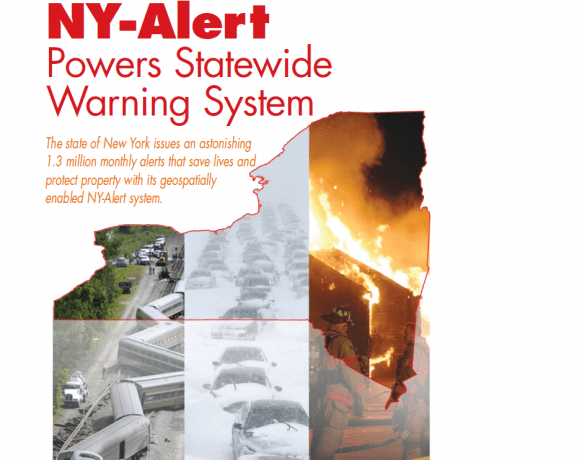 Â The New York state Department of Homeland Security and Emergency Services (DHSES) needed a way to alert the entire population of New York State”more than 19 million people”in the event of an emergency. The solution came in the form of a powerful tool called NY-Alert.

NY-Alert is the state's premier alert and notification system. Since 2006, it has notified citizens about risks they may face, as well as what preventive or corrective actions they can take to protect themselves and loved ones.

NY-Alert's geospatial technology can project incident boundaries and related icons on a satellite image with the click of a button.

NY-Alert is a collaboration between DHSES and Buffalo Computer Graphics, a Blasdell, N.Y.-based software and hardware engineering firm. The Esri ArcGIS Online imagery-integrated system uses a Web-based application, geographic information system (GIS) maps and Earth imagery to create and disseminate bulletins across a wide variety of distribution gateways. It merges complex Web-based software, interactive GIS mapping and the state's telephony infrastructure into a system capable of warning the entire state's population at the click of a button. NY-Alert can be initialized remotely to quickly provide critical information”including weather, traffic, and hazard updates”to citizens through electronic and mobile devices. It also allows emergency managers across New York state to distribute information in a fraction of the time it would take using older methods.

Â The National Association of State Chief Information Officers recognized NY-ALERT as the nation's first mass notification system to combine public information and alerting tasks into one system that lets the sending agency/organization create just a single written message, then choose the communication gateways for rapid, simultaneous dissemination. Previously, multiple messages had to be written to accommodate each technology, e.g., the Emergency Alert System (EAS), a website posting, email list-serves and other outlets. This was a time-consuming exercise that delayed a time-critical process.

The system uses multiple mass dialers to generate phone calls at a rate up to 10,000 calls per minute. Other distribution methods, such as email, are handled by Web services and a Microsoft SQL Server 2008 database.
NY-Alert relies on mapping and satellite imagery as a critical component, requiring highly capable GIS technology. In response to this need, it was among the first systems in New York to integrate a large-scale Esri infrastructure with Microsoft SQL 2008 spatial feature sets, along with an ASP.NET-based Web application for public use.

There were challenges along the way. For instance, version 2.0 of NY-Alert required switching to a Web Mercator projection due to distortion in the imagery presented in the North American Datum, which caused users to see circular objects as egg-shaped ovals. This distortion, while accurate from a GIS mapping perspective, wasn't what users expected.

Civilian users can use NY-Alert's public map to target addresses, locations and areas for which they want alerts. They can set severity levels so they only get alerts for severe or extreme events. Similarly, they can choose to receive alerts only at certain times of the day”for example, traffic alerts between 6 a.m. and 9 a.m.
Users with notification privileges can log into the Notifiers Portal, generate messages based on map locations and distribute the messages to a private notification group. Many state agencies and colleges and universities use NY-Alert to notify personnel and students with several broad-spectrum communication methods. Privacy is a prime concern for NY-Alert administrators and officials, so users must first sign up for an account agreeing to receive DHSES alerts.

Serving a Range of Users
Sixty-three New York universities use NY-Alert's private notification group technology to distribute messages to students and staff, ranging from class cancellations to serious security concerns such as bomb and shooting threats. More than half of all counties in New York have private notification groups for emergency managers that distribute messages to support personnel and volunteers such as fire and police.

Maps Make the DifferenceWhat makes NY-Alert an exceptional notification tool is its ability to use one mapping system to pinpoint individuals in areas as small as a single street block, or issue mass notifications across the entire state. This is possible because of a tight integration of Microsoft Silverlight- and Adobe Flex-based GIS maps, along with a rich Web-based map interface capable of displaying alert locations and details, municipal services locations (e.g., fire and police), weather radar overlays, traffic congestion on roadways and place-to-place direction routing.

A local alert projects a map with text instructions, including directions to the nearest fire department.

Esri ArcGIS Server Online-based GIS maps contain full orthoimagery as well as streets and roads. Notifiers can use the maps to alert people in a specific geographic area, municipal jurisdiction, or by drawing a polygon (multisided figure) on the map. Notifiers can also put a point on the map and generate a set distance buffer area around that point to target civilians who need to be alerted. Alerts use priority queuing to target civilians nearest the alert epicenter and work their way outward to warn those most at risk first.

NY-Alert's notification engine also offers advanced features for recording audio messages, text to speech, call-back verification to ensure a recipient got the message, recurring notification scheduler, and attachments for images, maps and documents that can be appended to an alert.

iAlertz can display transportation, meteorological and hazard alerts on a mobile device for any nearby town, county or even the entire state of New York. Users with a free NY-Alert account can receive customized notifications set up in NY-Alert. At the same time, iAlertz leverages 911Next technology and iOS device location services to geo-locate a user's device and provide locations, names and phone numbers for fire, local police, medical services, utilities, government services and more.

Need to find the nearest hospital? Tap that button on your mobile device and a map pops up with address, phone number and directions. The iAlertz app also provides one-touch 911 dialing for emergencies. iAlertz is available for the iPhone and iPad in the Apple iOS App Store. Windows Mobile and Android versions of the iAlertz mobile app are being developed. 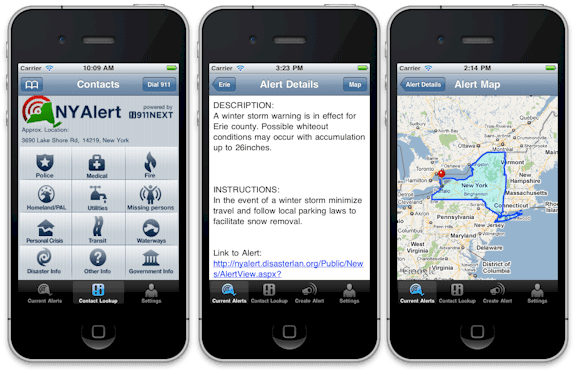 iAlertz can display meteorological and other alerts on a variety of mobile devices.