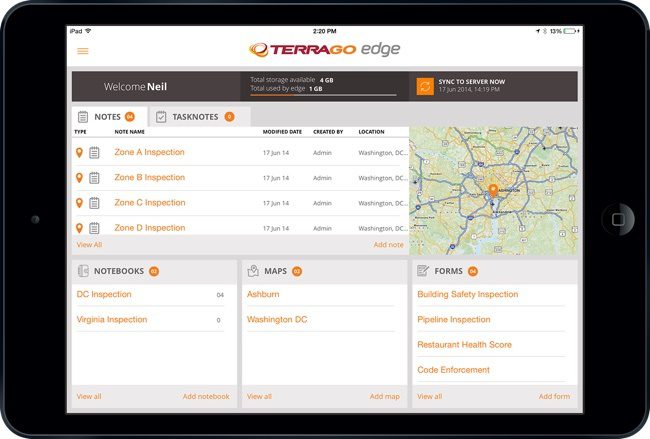 More than a decade ago, the U.S. Army established the motto that “every soldier is a sensor.”

But the manual also included a section on pen-and-paper reporting of these field findings up the chain of command. Thus, for all of its promise, “every soldier is a sensor” was more prophecy than fact.

Fast forward to today, with linked mobile devices and applications routing geospatial data back and forth between command and the field, generating information—including images and video—about situational awareness and threats. Prophecy now is reality, lives have been saved, and indeed every soldier has become a sensor.

Products like TerraGo Edge reduce data collection and field operation costs by syncing what happens in real time so administrators and field users see updates as they work.

Commerce’s road to “every worker is a sensor” has been shorter, and the pace that began at a jog is now a sprint. Enabling technology is proliferating, with geospatial companies developing ways to move data among work sites and management in real or near-real time with Web-based mapping and location services that let smartphones and tablet computers become extensions of the home office.

Data once moved along a one-way street, but now companies are learning they function best and most efficiently when traffic flows in both directions. By taking advantage of better communication tools and an increasingly savvy workforce, data for data’s sake has been replaced by data for decision’s sake. The worksite has become less remote and more on the edge of the business enterprise. That edge is extending toward more distant horizons as costs have dropped, services have been enhanced and customers have become more quickly satisfied—often without knowing why.

Catching up with Workers

Young people once entered the workforce knowing how to mine data from mobile devices because they had been doing so since they were children. But they had managers whose device capability was limited to calling home to learn what was needed from the store for dinner—a generation gap that now has closed.

Companies once inquired about the cost and potential contributions of geographic information system (GIS) technology, thinking it was only for giant companies and utilities. Instead of value, they saw the expense of a specially trained staff using a system that required the company to make major changes considerations. Their processes weren’t broken, so why fix them?

Now competition among an increasing number of GIS developers is bringing costs down, and competition among their customers is fueling demand for the efficiency and cost savings that GIS capabilities generate. More flexible systems that can adapt to a company’s increasingly far-flung operations are being developed, and solutions can be as easy as visiting an apps store.

Anyone can access maps and data that were once in the hands of a select few. Smaller companies are joining—and competing with—giants, taking advantage of and leveraging emerging mobile technology that brings ease of use and adaptability to existing systems. More streamlined and less cumbersome technology, along with more sophisticated consumers, means that GIS and accompanying information technology advances are becoming more demand driven than ever.

Companies have learned that a major capital investment in GIS no longer is necessary, because leasing services enable cost management and updating capabilities as the technology evolves. Maps to use such technology are becoming more faithful, with satellite- and unmanned aircraft system (UAS)-generated images and video development in a headlong race with capabilities to use them. As a result, customers are the winners. 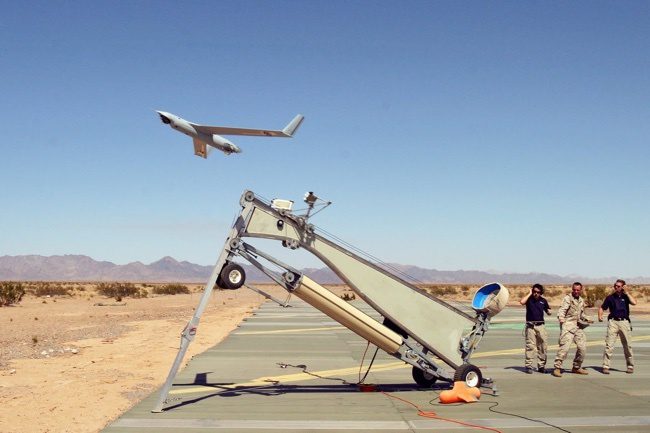 Drones such as the Scan Eagle UAS are designed to provide high-quality, real-time ground imaging through adverse weather conditions for a variety of missions too dangerous for human pilots.

The increasing mobile capability driving much of the evolution shows no sign of abating. A June 2014 report from International Data Corp. (IDC) forecasts a 15.6 percent growth in smart, connected devices this year, and the market is expected to grow from its current 1.8 billion devices to 2.4 billion by 2018. The same report adds that “the PC will be the new accessory to mobile as smartphones become the first and primary computing device for many.”

According to IDC, there will be six times as many smartphones sold than PCs by 2018. Much of the mobile growth will be fueled by the concept of “every worker is a sensor,” and much of that concept is fueled by new solutions that help organizations create intelligent, portable location-based apps for their unique areas of interest and specialized workflows. Apps are being developed that allow devices to deliver notes, photos and visuals from the field automatically tagged with location information that paints a thorough picture of situational awareness analysts can consume in real time.

Companies that formerly hoarded information in silos often find that sharing field data in a usable form is the key to efficiency and cost savings. Such companies also find that difficulties associated with translating reports into actionable intelligence are removed when both ends of the communications spectrum see the same data similarly.

Companies also learn that responsibility for actions can be identified through an automatic data trail created along the way more easily than a paper trail created at the end of an action. Imagine that the next time you read about a petroleum pipeline disruption, power outage or wildfire. Each of those scenarios is being addressed by a combination of imagery from satellites and UASs as well as by mobile-capable responders who follow such imagery to trouble spots and
offer on-site information and solutions.

Social media-driven geospatial elements directed emergency responses in earthquake-ravaged Haiti and tsunami-torn Japan, creating a greater understanding of mobile data sharing. In addition, oil is found, utilities lines are maintained, natural resources are husbanded, and emergency preparedness is enhanced when imagery and mobile reporting are synthesized with systems to direct action in real time while creating records that can provide historical context for future events.

Agricultural applications also are more effective and generate more profit when growing conditions and crop quality are monitored from the air and on the ground. Such observations and records can help redirect scarce water to where it can do the most good and send workers to fields in advance of emerging storms, making farmers less dependent or less likely to be victimized by nature and more capable of marshaling resources—including labor—to make agribusiness more proactive.

Help from Air and Space

A growing interest in the domestic use of UASs is being fueled by more flexible and less costly vehicles. With enabling domestic regulation for higher flights in the works, imagery will become more plentiful to serve as data fusion platforms, including advances in satellite technology, particularly with the development of the new wave of smallsats that have been embraced by entrepreneurs.

Google’s recent $500 million purchase of SkyBox will feed a commercial Earth imagery industry that’s already pegged at $2 billion and is expected to increase by 14 percent during the next five years. Images for Google Earth, already a standard, will become more frequent, appearing as often as twice a day by 2016 when SkyBox has six satellites in orbit and three times a day by 2018 when the constellation comprises 24 platforms. 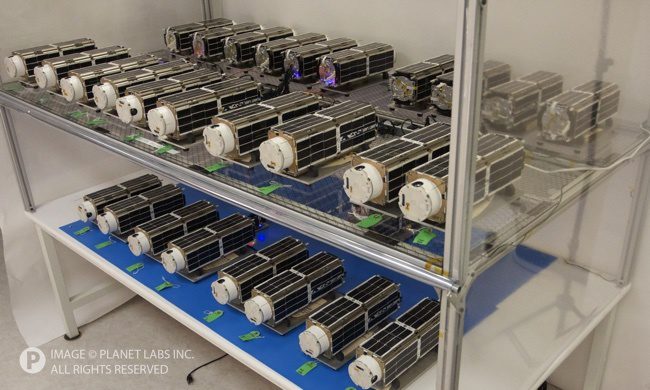 Launched in January 2014, Planet Labs’ 28 Dove microsatellites are the most spacecraft from a single operator to ever have been launched together.

Other companies are showing they aren’t cowed by Google’s prowess. For example, Planet Labs will offer crowd-sourcing innovations resulting from 131 microsatellites by 2019. The images they generate will make geospatial data easier to visualize and, hence, more effective when combined with emerging fusion capabilities. Once again, simplicity is a driver, and so is a growing sophistication and resulting demand for mobile capabilities to take workers out of the office and put them in the field where they can do the most good.

UAS and satellite images also are going to get clearer and more usable. The June 2014 decision by the U.S. Commerce Department, with concurrence by the intelligence community and State Department, to ease restrictions on commercial satellite imagery will feed satellite technology advances as well as the hungry industries learning to use the data in ways that were unrealistic only five years ago. Most of those new uses will involve mobile devices that enable every worker to be a sensor.

The old adage that “knowledge is power” is being replaced by “shared knowledge is more powerful.” That new power is generated by an understanding that more can be accomplished through teamwork, and a team works better when all of its members understand what’s at stake while accomplishing a job. The boundaries of those stakes are formed by shared data, and those boundaries are expanding with every technological advance that makes team building easier and more usable.