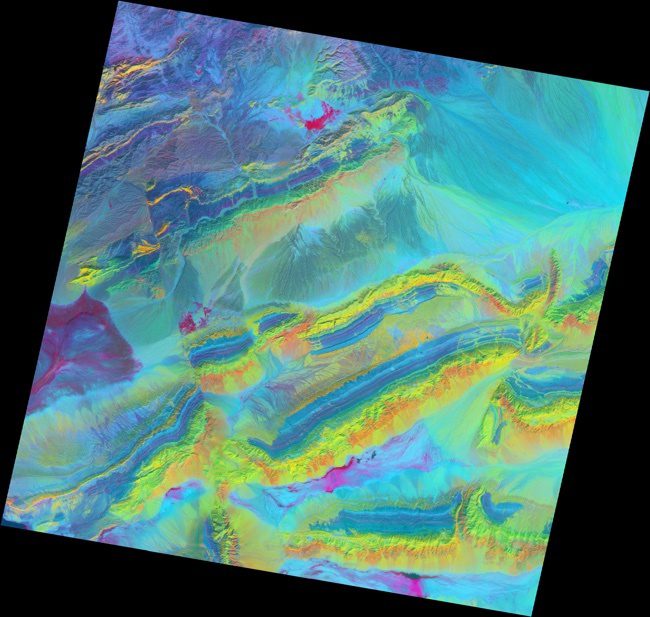 Scientists can identify specific mineral types by comparing the spectral signatures in satellite images with reference graphs for known minerals.

A satellite image is more than a photo. It’s a picture of the amount and type of energy reflected or emitted by Earth as recorded by a satellite instrument. There are many ways to combine such measurements to create an image, and each combination provides different insights.

The spectacular exposed geology of northwestern China offers an ideal landscape for illustrating how satellite measurements can identify minerals from afar. In satellite imagery, this area has three different sedimentary rock layers that are visible as rainbow stripes on a series of ridges.

The Piqiang Fault split the ridgeline, so the colored layers are offset by about three kilometers (two miles). All of the images appearing in this article were made from data acquired on Feb. 24, 2005, by the Advanced Spaceborne Thermal Emission and Reflection Radiometer (ASTER) on NASA’s Terra satellite. 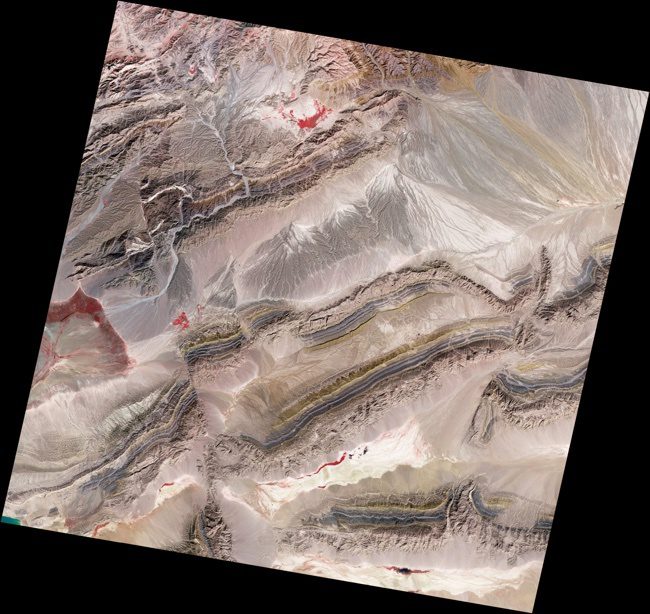 A false-color image, made with a combination of near-infrared, red and green light, shows plants as dark red, but the striped ridges remain similar to their appearance in a natural-color view.

A satellite image is made by combining observations from three different wavelengths of light. A natural color
image—one in which the colors are similar to human vision—is made with red, green and blue light. The first image at the bottom of this page is a false-color image made with a combination of near-infrared, red and green light. Because near-infrared light is outside of a human’s range of vision, it’s assigned to look red in this image. By scientific convention, red light is assigned to look green, and green light is shown in shades of blue, a combination that matches traditional infrared film.

When all three are combined, the landscape takes on the colors shown in the first image. Plants are dark red, but the striped ridges remain similar to their appearance in a natural-color view. The gold layers on the north side of the ridge line are Devonian sandstone. The dark gray layers are Silurian sandstone, and the light brown layers are Cambrian-Ordovician limestone. The plants are red because they reflect a lot of near-infrared light, the wavelength assigned to be red in the image. They reflect little red light, the wavelength assigned to be green. 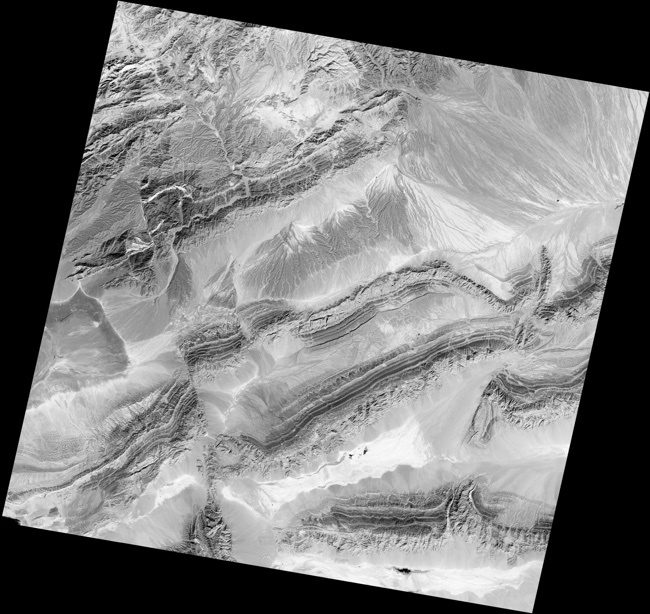 Combining observations from three different wavelengths is just the first step in creating a satellite image. The next step is to optimize the contrast, an adjustment similar to fixing the light exposure in a photograph. If you were to chart the amount of near-infrared light in the first image as a line graph, you’d see peaks where a lot of light is reflected and valleys where little is reflected. In an image, these peaks and valleys are depicted with different shading.

For example, the second image shows the near-infrared measurements from the first image in shades of gray. The image is bright where the most near-infrared light is reflected—the peaks on the line graph—and it’s dark where less near infrared is reflected.

Often the values in the line graph will be bunched in one area, with many pixels reflecting moderate amounts of light and a few reflecting either no light or a lot of light. When the line graph was translated into shades of gray in the second image, image analysts made the highest peak white, the lowest valley black, and all of the values in between a shade of gray. This effectively “stretches” the image to include black, white and every shade in between; this makes small features more distinct.

Sometimes a scientist might want to “stretch” an image using a value other than color. The third image is an example, using three different wavelengths of shortwave infrared light to expose mineralogy.

If you drew line graphs for the three shortwave infrared wavelengths in this image, they’d look pretty similar. But if a scientist wanted to emphasize the minor variations, he or she could use mathematics to emphasize the differences between the graphs. The result would be three line graphs that have the same relationship to the original data.

After performing the mathematical stretch, the scientist will assign the stretched grayscale images to colors and create a new picture. This type of stretch is called decorrelation. 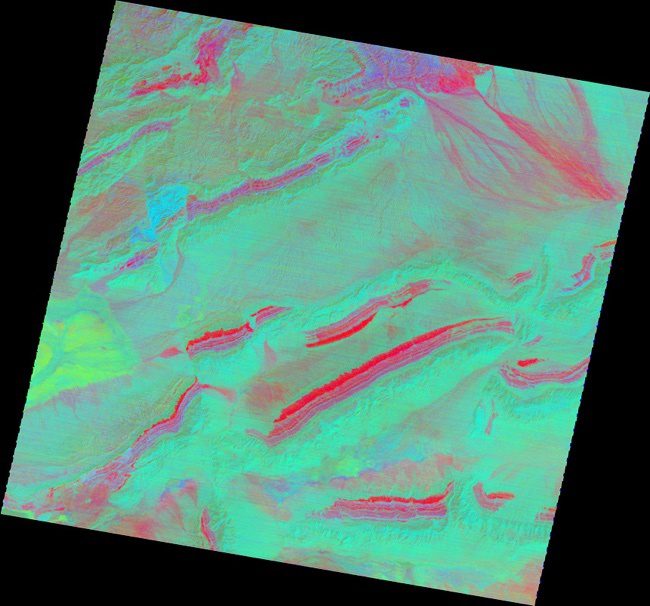 Performing a decorrelation stretch on three thermal-infrared wavelengths emphasizes the difference between sandstone (red) and other mineral types (green).

In the third image, decorrelation emphasizes subtle differences in the mineral composition of the rocks and soil. Silurian sandstone that was dark gray in the false-color image is now shades of purple and blue, hinting at differences in composition that don’t show up in the original image. The Devonian sandstone is also blue threaded with purple, pointing to similarities with the Silurian sandstone—although the two look different in the first image. Elsewhere, soils and rocks that are uniformly tan in the first image exhibit properties that show up in many different colors.

Performing a decorrelation stretch on three thermal infrared wavelengths, as in the fourth image, emphasizes the difference between sandstone and other mineral types. The sandstone features are red, while everything else is green.

These images help geologists see patterns that might be otherwise difficult to pick out. To learn more about how scientists use different wavelengths of light to learn about the world, see “How to Interpret a False-Color Satellite
Image,” Earth Imaging Journal, March/April 2014.