Journey on the Waveform

A step-by-step description of a mobile mappingÂ  project reveals theÂ  tricks of the trade. 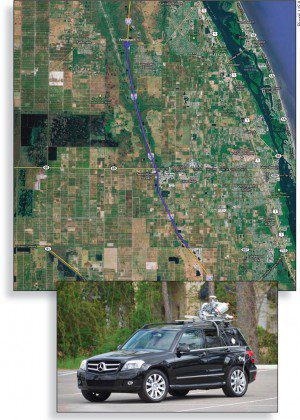 The acquisition vehicle (inset) traveled a nine-mile, two-lane section of Interstate 95 near Vero Beach, Fla. The collection route is shown in purple.

The following project was motivated by a highway paving company's need for better data so it could manage its costs and bidding approach more effectively to generate a better return on investment. The information needed was the as-built slope of an existing road deck.

Traditional surveying methods would've taken about a week, while exposing survey crews to traffic and dangerous conditions. The same survey collected with mobile scanning equipment took less than two hours and provided more information than a survey crew could collect in a month. More importantly, no one was exposed to potentially hazardous working conditions.

The laser scanners and the INS-GNSS unit were attached to a stable mounting platform that can be mounted on any vehicle. A single cable connected the measuring head to the control unit box, which was housed in a case and contained the power supply; a computer running Riegl's RiACQUIRE software package for data acquisition; removable hard drives; and a handy touch screen, providing a convenient control interface for the operator.

A plot shows the PDOP during the collection window.

First, GNSS satellite coverage was evaluated by examining the positional dilution of precision (PDOP), which is a calculation of the strength from the predicted GNSS satellite constellation at the time and location of data acquisition. A PDOP number works like a golf score”the lower the number, the better the expected quality of the positioning data the GNSS receiver will collect. Typically, a PDOP of three or less is ideal. This measurement is performed only with Global Positioning System (GPS) satellites, because the best trajectory solutions only use GPS positioning information to calculate the output of this process”the smoothed best estimate of trajectory (SBET). 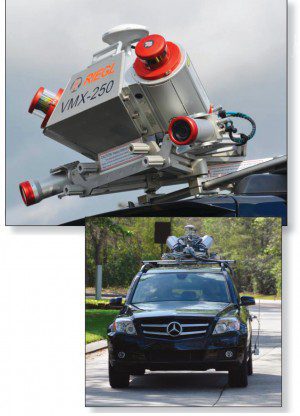 The camera system and laser scanner measurement head was carefully secured to the pre-installed roof rack of the acquisition vehicle (inset).

The second consideration was the amount of traffic on the road. In this case, the surveyed section project area is a commuting route for the Fort Lauderdale and Jupiter areas. Therefore, an acquisition window was set from 11 a.m. to 12:30 p.m. to avoid the high traffic volume of morning and evening rush hours. Having the road clear of car noise is important when the road's slope is measured, because missing data makes the process more difficult. The figure at left shows the PDOP in green. Note it's less than three between 11 a.m. and 12:40 p.m., the planned time window for the data acquisition.

DataÂ CollectionÂ Details
A quick hour drive from Riegl's Orlando, Fla., office brought us to theÂ  Vero Beach area, where we stopped to set up the mobile mapping system by attaching the DMI to the driver's side rear wheel and carefully attaching the camera system and laser scanner measurement head to the pre-installed roof rack.

Now it was time to collect the data, so we began our final checklist. All collections begin after a 5-minute static waiting period for the INS-GPS solution to achieve a good initial location. The higher the accuracy of the initial position, the better the Kalman filter can estimate IMU biases to create an accurate kinematic model of the trajectory, correct the GNSS position estimates and fill in gaps created by outages. System initialization can be checked off the list.

The IMU sensor's alignment takes a few well-executed maneuvers to bring the heading, roll and pitch estimated solution errors within five hundredths of a degree. The best way to accomplish this is to spin the vehicle around, with rapid heading and rotation changes to excite the three gyros and accelerometers inside the IMU”basically driving a figure-eight pattern. Now IMU alignment can be checked off the list, and the system is ready to begin data collection.

Merging into traffic, southbound on I-95 toward Miami, we have two miles before the collection area begins. We watch the mile markers pass, waiting for traffic to clear to give us an unobstructed view of the fast lane and shoulder from our steady pace in the slow lane. The two laser scanners are enabled to ensure everything is communicating as expected. Now we're taking light detection and ranging (LiDAR) measurements at a rate of 600,000 per second. 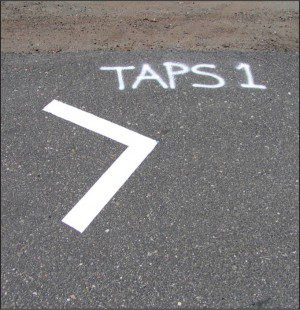 The target used for control and validation points was shaped like a chevron to help the processor determine the horizontal accuracy.

As we watch our path on the RiACQUIRE screen, we can also see returns from each laser scanner. The quality of the trajectory data is also being monitored in real time. Upon arrival at the starting mile marker, we switch the scanner's mode from on to logging, and a 2-D point cloud swath is traced on the screen as we head south.

Driving at near the posted speed limit to keep up with traffic and avoid areas of missing data because of passing vehicle
obstructions, we soon reach the first control marker. The markers are set at 1,500 U.S. survey feet intervals, with the exception of two control points set right after the overpass. As we continue our collection, we pass the survey crew collecting some validation points we'll use to further confirm data accuracy and quality.

Traditional surveying ground control is needed to assess the quality of the data collected. To effectively check the mobile LiDAR data, several considerations need to be accounted for unless specific control requirements are in place by an agency or client. In this case, our own control requirements could be used.

The typical pattern is every 1,500 to 2,000 U.S. survey feet for a control point unless an obstruction is in the path. In the case of a line-of-sight obstruction”such as overhanging vegetation, a tunnel or an overpass”a control point is placed afterward to check how well the trajectory solution was processed after a loss of satellite lock.

As shown in the image at left, the shape of the target used for both control and validation points is a chevron to help the processor determine the horizontal accuracy. The recorded survey control point is at the tip of the chevron. White asphalt tape is used to mark the targets, which show up clearly in the LiDAR data because of the tape's high reflectivity.

At the end of the first pass, we had collected 10 separate records”one for each mile driven”and roughly 1.8GB of data. A second pass was needed because of several gaps in the road surface coverage from car noise. A little luck and some good driving allowed for the second pass in both directions to remove all data gaps from the first pass. Upon completing the second northbound pass, we were confident the processed data would provide complete road surface information for the project site.

After acquisition, we returned to our starting system initialization location for another 5 minutes of static data to achieve a good final fixed location to complete the data collection.Â  The overall collection time was one hour and thirty minutes.

Following the mission, the scanner, DMI and camera system were removed from the roof and placed inside the car. With the scanner safely inside the vehicle, we headed home, knowing the data we collected met the mission's objectives. The only question left unanswered is how well it will compare with the survey validation points. In the next issue of Earth Imaging Journal, we'll take you inside the processing portion of our mission.