Earth imagery is elevating our understanding of today’s interconnected world. The images below highlight a few of the many ways remote sensing helped chronicle some of 2013’s noteworthy events and innovations.

First LDCM Images “Great Right out of the Box” 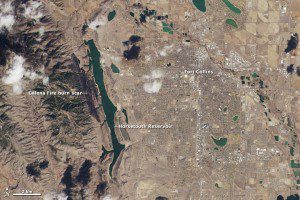 Made with reflected red, green and blue light, this image shows Fort Collins as the human eye would see it. The city is a gray grid surrounded by the curving roads and brown yards of residential neighborhoods. White clouds cast black shadows on the ground below. Land freshly burned in the Galena fire is charcoal black—just slightly darker than the dark green coniferous forest to its west.

On March 18, 2013, the newly launched Landsat Data Continuity Mission (LDCM) began sending images back to Earth from its two sensors, the Operational Land Imager (OLI) and the Thermal Infrared Sensor (TIRS), including the accompanying two images of Fort Collins, Colo. 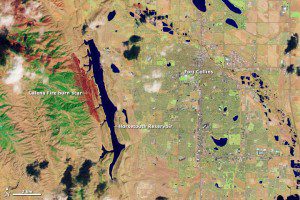 The images are close-up views from the OLI sensor at its maximum resolution of 15 meters per pixel. One image displays natural color, while the second image blends shortwave infrared, near-infrared and green wavelengths (LDCM bands 7, 5, 3).

“The first OLI and TIRS images look great right out of the box,” said Jim Irons, LDCM project scientist. “I couldn’t be more impressed with their appearance.”

On May 30, 2013, NASA declared LDCM’s on-orbit checkout complete. The satellite was renamed Landsat 8, and operations were handed off to the U.S. Geological Survey.

EF5 Tornado Touches Down in Oklahoma 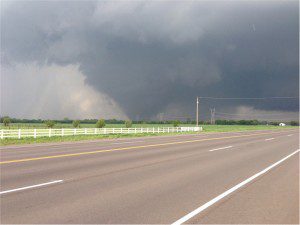 The 1.3-mile-wide tornado was photographed as it passed southwest of Moore.

Satellite imagery reveals damage from a tornado that struck the area of Moore, Okla., on May 20, 2013. With peak winds estimated at 210 mph, the tornado is one of the most powerful and destructive ever recorded—determined to be an EF5, the strongest rating for a tornado.

The tornado killed 23 people and injured 377 others. In the immediate aftermath of such a natural catastrophe, the priority is searching for survivors and saving lives. However, satellite imagery also can provide a systematic approach to aiding, monitoring and evaluating the long-term recovery process. 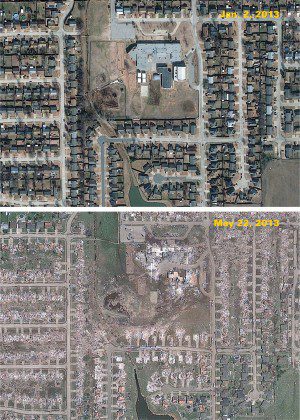 A false-color image, created from the recently rescued and reprocessed Nimbus II High Resolution Infrared Radiometer sensor, displays the maximum temperature values at a point from August 1-30, 1966. Although the data are from 1966, this image never has been seen before 2013, as there was no way to process the data in this manner in 1966.

NASA recently released recovered data collected by NASA’s Nimbus II satellite on Sept. 23, 1966. The satellite soared over Earth in a polar orbit every 108 minutes, taking pictures of cloud cover and measuring heat radiated from the planet’s surface. The resulting photo mosaic of the globe is the oldest and most detailed from NASA’s Earth-observing satellites. Global coverage from Nimbus I (1964) Nimbus II (1966) and Nimbus III data products now are available from NASA’s data access interface, Reverb, and through the National Snow and Ice Data Center.

Colorado Recovers from a 1,000-Year Flood 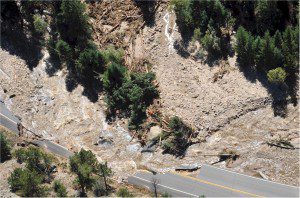 During the week starting on Sept. 9, 2013, a slow-moving cold front stalled over Colorado, clashing with warm humid monsoonal air from the south. This resulted in heavy rain and catastrophic flooding along Colorado’s Front Range from Colorado Springs north to Forth Collins. The situation intensified on Sept. 11 and 12. Boulder County was worst hit, with 9 inches recorded Sept. 12 and up to 17 inches of rain recorded by Sept. 15, which is comparable to the county’s average annual precipitation (20.7 inches). 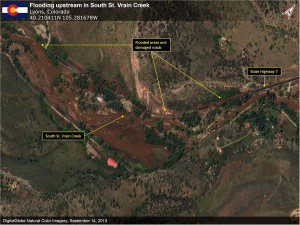 Just southwest of Lyons, Colo., along South St. Vrain Creek, satellite imagery analysis reveals extensive damage to Colorado Highway 7. The area shows indications of debris and wide-scale flooding, hinting at the volume of water that roared through these canyons during the peak flooding.

According to the National Weather Service, the area experienced once-in-a-millenium amounts of rain. The flood waters spread across a range of almost 200 miles from north to south, affecting 17 counties. At least eight deaths were reported by the Colorado Office of Emergency Management, and more than 11,000 people were evacuated.

During the last year, it has become Jordan’s fourth-largest city—except it’s not a city. It’s the world’s second-largest refugee camp. Located in northern Jordan near the border with Syria, the Zaatari refugee camp opened in July 2012 and now houses roughly 129,000 people.

In these ASTER-Terra images, the camp appears brighter than its surroundings due to the white roofs of the thousands of temporary housing units.

The ASTER instrument on NASA’s Terra satellite captured the accompanying false-color images of the area around the camp. According to the United Nations High Commission for Refugees, setting up and expanding the camp has been the equivalent of building a city the size of Cambridge, England, or Fargo, N.D., in a single year. There are more than 1.6 million registered Syrian refugees in Jordan and neighboring nations. 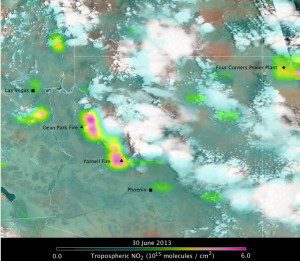 The Yarnell Hill fire near Yarnell, Ariz., was ignited by lightning on June 28, 2013. On June 30, the fire overran and killed 19 firefighters while they tried to make it to a safe zone after an unpredictable desert thunderstorm—visible just east of the fire (black triangle) in the accompanying image—turned the fire into their path. The wildfire was fully contained by July 10, 2013. The event resulted in the highest wildland firefighter death toll in the United States since the 1933 Griffith Park Fire in Los Angeles killed 29 firefighters. 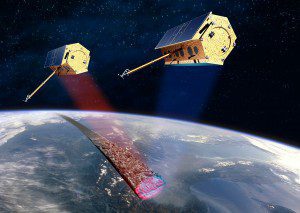 Flying in a closely controlled formation, with typical distances between 250 and 500 meters, allows the two TanDEM-X satellites to generate the WorldDEM.

In the summer of 2013, Astrium’s TanDEM-X mission finalized its second coverage of Earth’s entire landmass. Now the mission’s two satellites, TerraSAR-X and TanDEM-X, are ready to tackle the final hurdle of their data acquisition campaign by acquiring a third and sometimes even fourth coverage of Earth’s challenging terrain areas. 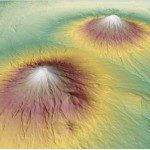 The unique twin-satellite constellation will allow researchers to generate the WorldDEM, a consistent, global digital elevation model that will be commercialized starting in 2014. 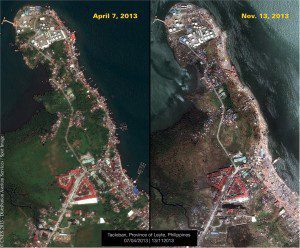 Following Typhoon Haiwan, Pléiades imagery was made available to rescue teams and authorities within the framework of the International Charter on Space and Major Disasters.

The devastating effects of Typhoon Haiyan, which hit the Philippines on Nov. 8, 2013, were evident in Pléiades satellite imagery collected Nov. 13. The satellite had captured images of the same area, Tacloban, on April 7, 2013.

With maximum sustained winds of 195 mph (315 km/h), the typhoon is among the strongest ever to make landfall, killing at least 5,235 people in the Philippines alone. According to United Nations officials, about 11 million people were affected, and many were left homeless. 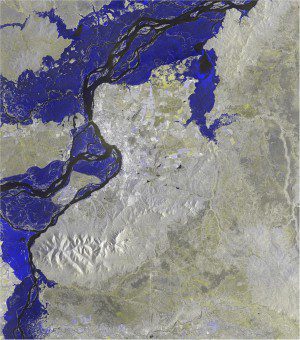 A RADARSAT-2-generated imagery product shows the extent of the Amur River flooding.

From the end of July to mid-August 2013, unusually heavy rainfall occurred near the Amur River, which marks the dividing line between China and Russia. More than 140 towns were affected by what Russia authorities described as the worst flooding in 120 years. In China, more than 60,000 homes were destroyed, and numerous roads were blocked or damaged.