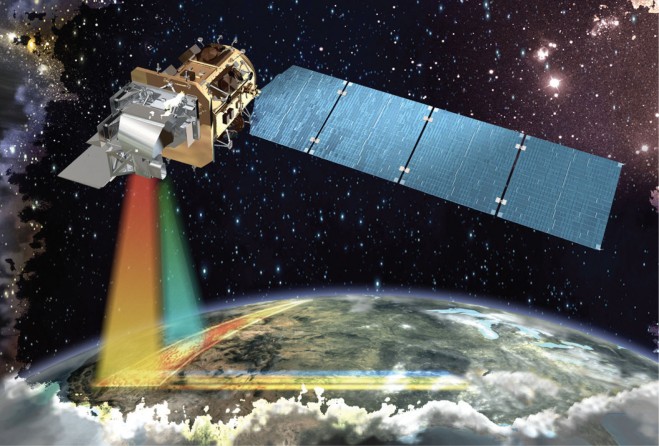 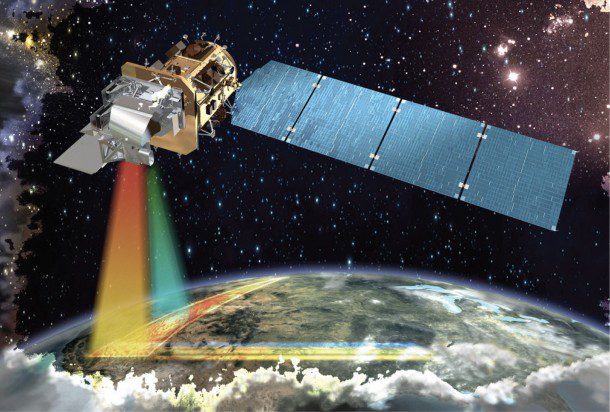 Landsats 5 and 7 are all but finished, pinning the program’s future squarely upon the next planned mission.

Since 1972, the Landsat program has provided an unbroken flow of global land imagery. Developed jointly by NASA and the U.S. Geological Survey (USGS), the next Landsat mission will maintain data continuity by using new technical approaches to deliver higher quality images that are fully compatible with the historical dataset archive. 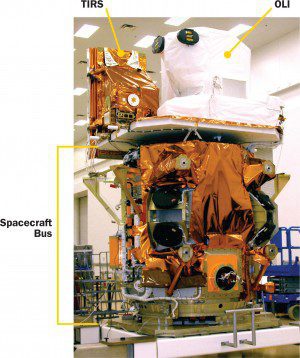 The Landsat Data Continuity Mission (LDCM) is scheduled to launch in February 2013. The new satellite—unofficially known as Landsat 8—will continue the Landsat objective of providing synoptic, seasonal, medium-resolution multispectral observations of the global land surface. Once in orbit, LDCM operations will be assumed by USGS, the same agency that operates the limping Landsats 5 and 7 and manages the processing and delivery of image products from those satellites.

LDCM will take advantage of evolved remote sensing technologies to deliver data that are consistent with information collected by earlier Landsat missions. The changes include increased radiometric sensitivity, additional spectral bands, a simpler mechanical approach and increased capacity for data storage and transmission.

The Operational Land Imager (OLI) is LDCM’s primary sensor. Now under development by Ball Aerospace & Technologies Corp., OLI is a multispectral imager equipped with high-performance integrated detector arrays and precision spectrometers. Using technology proven on NASA’s Earth Observing 1 (EO-1) mission launched in 2000, OLI will collect images in nine wavelength bands, ranging from 433 up to 2,300 nanometers (see table, page 22). Six of the bands are equivalent to those of theETM+ sensor currently in use on Landsat 7. The two additional bands on OLI are an ultra-blue band centered at 443 nanometers for coastal and aerosol studies, as well as a cirrus band centered at 1,375 nanometers for cloud detection. OLI doesn’t collect data in the thermal infrared wavelengths.

OLI uses a reflective optical path comprising four mirrors to capture incoming radiation, focus it and deliver it to its detector array. It collects a ground swath approximately 185 kilometers wide directly beneath the spacecraft. In OLI’s panchromatic band, each pixel represents 15 meters on the ground, while the other bands provide pixel resolution of 30 meters. OLI will collect and store 12 bits per pixel.

To gather thermal information, LDCM will carry a two-channel Thermal Infrared Sensor (TIRS) being developed by NASA at the Goddard Space Flight Center. The additional thermal channel enables more accurate correction for atmospheric effects in the thermal bands, which leads to a more accurate retrieval of surface temperatures than with a single band. TIRS will store 12-bit pixels, with 120-meter ground resolution.

The $160-million TIRS instrument was a late addition to the LDCM design. In April 2012, NASA encountered a problem when the sensor’s cryogenic cooler lost its supply of helium due to a leak traced to the device’s fill tube. Engineers were able to address the leak without disassembling the instrument, and the issue isn’t expected to affect the project schedule.

OLI and TIRS operate using “push-broom” sensor technology, a significant change from the “whisk-broom” approach used on earlier Landsat vehicles. In theETM+ on Landsat 7, a mirror oscillates perpendicular to the satellite’s path of travel. As the mirror moves, it directs incoming light from a swath across the travel path onto detectors to form an image’s cross-track dimension. The satellite’s forward motion over Earth provides an image’s long-track dimension.

Because the satellite is moving, the detectors see a curved path as the line of sight sweeps along the ground. A scan line corrector resolves the sweep effects and removes the gaps that naturally result as the mirror oscillates and the satellite moves.

In the LDCM push-broom design, long arrays of detectors for each spectral band are aligned across the instrument’s focal plane, perpendicular to the satellite’s direction of travel. Instead of an oscillating mirror that directs energy onto one detector per spectral band, the response from the array of detectors forms the cross-track dimension of the images. In the OLI, there are more than 6,000 detectors for each spectral band, collecting an entire image line at once. The forward motion of the spacecraft and resampling of the detectors create the long-track dimension.

Because the push-broom detectors can dwell longer on the energy coming up from each line, the signal-to-noise ratio can be much higher than can be achieved with the whisk-broom approach. In addition, the push-broom system delivers richer, deeper data. The system provides a wider dynamic range and gives the imager a more sensitive response to radiation changes. OLI’s 12-bit data are commensurate with OLI’s superior signal-to-noise ratio and represent a marked improvement overETM+.

In 2003, the scan line corrector on Landsat 7 failed, and operators and users were forced to find workarounds or alternative data sources. The push-broom approach on LDCM is mechanically simpler thanETM+ and removes potential trouble points.

Landsat 7 collects about 250 images every day. With its onboard data storage, it collects images and sends them to Earth when it passes in view of a ground station.

LDCM will collect and return to the U.S. archive approximately 400 images per day and will carry a larger solid-state recorder than on Landsat 7. Designed to operate in imaging mode for longer periods of time than its predecessors, the system will include lossless data compression for the OLI, as well as a downlink transmission rate that’s higher than the existing satellites. Because of the coarser resolution and lower data rate on TIRS, that data will not be compressed.

To receive the increased data, a new ground station is planned to go online in Alaska, and updates to antennas and processing equipment are under way. New algorithms to handle the push-broom sensors are in development, and computer hardware will be upgraded to handle the increased throughput.

The OLI and TIRS spectral bands are consistent with historical Landsat data. The new deep blue and cirrus channels were included in response to requests from the Landsat user community. 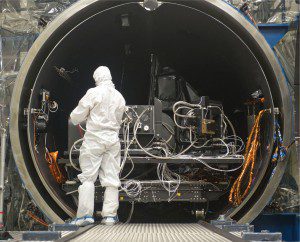 Sitting inside the thermal vacuum chamber after a round of testing, TIRS is ready to be disconnected and rolled out of the chamber.

The differences in the band ranges between LDCM and Landsat 7 are important. The push-broom sensor’s higher signal-to-noise ratio makes it possible to narrow the spectral bands and move them away from atmospheric absorption features, thereby reducing the sensitivity of the changes in the atmosphere. In addition, OLI’s narrower panchromatic band will provide better spectral contrast over land surfaces.

The biggest change is in the near infrared (band 5 in OLI). That band is substantially narrower and will be less sensitive to atmospheric conditions than Landsats 5 and 7.

Landsat images must be georeferenced and attitude-corrected. Previous Landsat missions relied on ground-based tracking to determine ephemeris data for the satellites. Like its predecessors, LDCM will use attitude sensors, star trackers and ground control points to calibrate the attitude of the OLI and TIRS sensors. In addition, an onboard Global Positioning System (GPS) receiver will provide information on the satellite’s position and attitude.

Because consistency to existing imagery is more important than absolute geodetic accuracy, LDCM will frequently use ground control to ensure consistent geometric corrections and scene-to-scene accuracy over time. Image data will be referenced to the World Reference System 2 with coordinates on the World Geodetic System 1984 datum.

In cases of disaster or other priority need, LDCM will be able to capture off-nadir images. If the satellite is passing close by but not directly over an area of interest, it can use its reaction wheels to tilt by as much as 15 degrees to the left or right of vertical. This is expected to be an infrequent occurrence, as it distracts the system from its primary objective of systematic image capture.

Beginning in late 2008, USGS made Landsat available free via the Internet. In the program’s first year, users from around the world downloaded more than 1.1 million scenes. USGS will include LDCM data into the free program. Data from the new satellite will be available from the existing USGS web portal at http://earthexplorer.usgs.gov or http://glovis.usgs.gov.

Current Landsat data users will experience little difference in data from the new satellite. LDCM will fly the same ground path as Landsats 5 and 7, minimizing adjustments for geometric comparison with earlier images. Orbital timing is also similar, so lighting and illumination angles will remain consistent.

OLI will collect data for two new bands, a coastal band and a cirrus band, as well as the heritage Landsat multispectral bands. Additionally, the bandwidth has been refined for six of the heritage bands.

LDCM imagery will be delivered in GeoTIFF format. Most commercial software packages used today are positioned to use the 12-bit data from OLI and TIRS. USGS will integrate and register images from the two sensors into a single data product for end users. With LDCM, USGS plans to add a three-band full spatial resolution product. The full-resolution images will be scaled to 8 bits and are intended as background or context images for use in a geographic information system.

The LDCM sensors will be rigorously calibrated and characterized to ensure consistency with historical data. Pre-launch procedures include laboratory and thermal vacuum chamber calibration of spectral and radiometric response. Once on orbit, OLI and TIRS will be regularly calibrated using on-board sensors and ground-control
comparisons.

An additional approach may be used during LDCM’s early orbital phase. As the new satellite is raised to its final altitude of 705 kilometers, it will pass beneath one of its sister Landsat satellites. During these passes, both satellites can capture images of the same scene on Earth, allowing the LDCM images to be directly compared with images from the sensors on Landsat 5 and 7.

The project teams are sensitive to the age and vulnerabilities of the existing satellites. They have an acute sense of urgency in meeting the development schedules necessary to maintain the continuous flow of Landsat data.

The Cryocooler (left) and Scene Select Mechanism (right) are part of LDCM’s TIRS. The Cryocooler will cool LDCM’s detectors to 43K (-382F) to get optimal thermal data. The Scene Select Mechanism rotates LDCM’s TIRS mirror among three scenes: the Earth view and two calibration views. Correct image positioning depends on precise pointing, and that position must be returned to faithfully after each calibration sequence. OLI will collect data for two new bands, a coastal band and a cirrus band, as well as the heritage Landsat multispectral bands. Additionally, the bandwidth has been refined for six of the heritage bands.

With LDCM, NASA and USGS intend to have better data acquisition and distribution strategies, including parts of the world where rich data haven’t been available. The agencies are taking advantage of improvements in technology and experience from previous missions to provide a better set of capabilities and suite of data products to the global remote sensing community.

Acknowledgements: Thanks to the following people for their tireless work to ensure LDCM’s success: Dr. Jim Irons is the NASA project scientist for LDCM. Based at NASA’s Goddard Space Flight Center, his role is to ensure LDCM fulfills the program’s scientific requirements. John Dwyer is the USGS project scientist for LDCM. Working at the USGS Earth Resources Observation and Science (EROS) Center, his focus is on the ground system that will operate as part of LDCM. Dave Hair is acting USGS project manager for LDCM at the EROS Center. He provides overall direction for the project at EROS and ensures that USGS delivers its requirements for LDCM to meet objectives for schedule, scope and budgets.