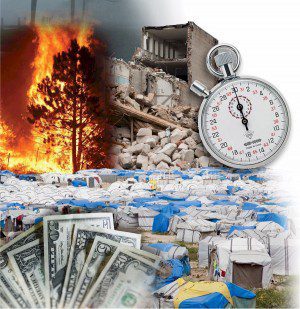 Sometimes we know of an event or situation about to unfold, but often we’re caught off guard by natural and man-made disasters. First responders, the media and aid workers around the world must react and respond quickly and safely, often at a moment’s notice.
Gaining situational awareness is the key to initiating any sort of response, and satellite imagery plays a major role in preparing and executing that response. For example, together with several partners and customers, GeoEye (http://www.geoeye.com/) has supported disaster relief and recovery efforts following numerous events around the world during the last few years. Collecting and delivering high-resolution imagery within hours has given many people involved in disaster response efforts critical intelligence otherwise unattainable.

The use of satellite imagery in emergency situations can result in time and lives saved. Additionally, leveraging historical data (archive imagery) can help with predictive analysis and preparedness for future events. With historical data, emergency managers can determine important changes that have taken place as a result of an event. Additionally, satellite imagery can be used for rebuilding efforts, relocation efforts and future planning.

The Problem
The number of natural events that have caused serious damage and resulted in lost lives seems to have increased in recent years. Whether this is true or a result of the increasing availability of information about these events, the end game is the same: We have far greater visibility into global events, and we’re seeing life- and Earth-altering results on a scale like never before, especially in areas prone to natural events, such as coastal regions and earthquake- or hurricane-prone areas.
A major issue facing responders and other stakeholders is a lack of information or intelligence. Although many U.S. and European cities and towns have a vast store of readily available geospatial information, other countries don’t have the infrastructure to support a full geospatial response. Occasionally, even the most robust geographic information system (GIS) departments are at risk.
For example, following the tragic events of 9/11, the New York City GIS department was severely affected by the collapse of the World Trade Center. Although New York has some of the most advanced data consumers and GIS users in the world, they suddenly lacked the critical data and information to mount an immediate, comprehensive rescue and recovery effort. How do we get data and imagery in the hands of those who need them most?

The Challenges
Although commercial and government satellite programs have incredible assets available, often access over an affected region is a challenge. Pure physics and satellite engineering don’t always allow providers to capture imagery over a region at the time of impact. Weather is another factor at play when striving to collect useful imagery. A satellite may have access at any given time, but clouds, smoke and haze can block the view of the ground. 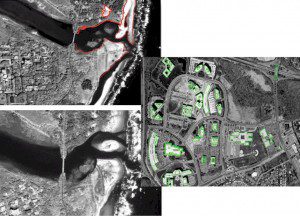 Before and after imagery analysis from the June 13, 2010, earthquake and subsequent tsunami in the eastern Indian port city of Chennai shows what has changed.

Another challenge lies in disseminating the imagery after it has been collected. In areas where infrastructure can support imagery delivery via an FTP site or the Internet, sometimes that connectivity has been compromised, as was the case during Hurricane Katrina. In countries where connectivity is routinely an issue, disaster response is an even greater challenge.

Accuracy also can be a concern when responders are consuming data directly from a satellite. Under normal circumstances, providers are able to create a well-balanced and highly accurate product to deliver to users either at their own sites or through value-added partners with industry expertise. In an emergency situation, when pushing data out in a timely manner is a priority, imagery can be off by several meters when compared to other datasets an organization or user might have on hand. Although this doesn’t usually pose major problems, it’s something to considering so responders can be prepared for what they receive.
The Solution
Working with GIS users and imagery consumers to establish guidelines for data requests during a crisis is ideal; however, that isn’t always possible. Usually a satellite imagery company will collect imagery when passes are available, regardless of weather or collection angle, to ensure that at least some data are captured.

Providers can task satellites based on their flight path to collect imagery over a given area of interest. During an emergency, they can allocate satellite resources on an ad-hoc basis to take advantage of the best capture opportunities. Although this doesn’t always result in an ideal product, it does get information into the hands of the people who urgently need it. 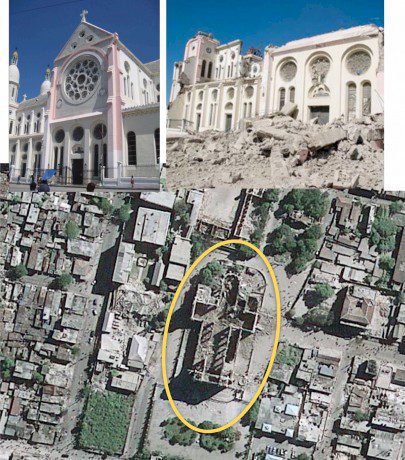 After the Jan. 12, 2010, earthquake in Haiti, the Port Au Prince National Cathedral remains standing, but it's terribly damaged.

In addition to leveraging assets to capture data, there are several trusted solutions in place across the industry, as well as new tools and solutions to disseminate raw data quickly. Historically, providers have uploaded imagery to an FTP site from which users can download data directly, or they will deliver data on a hard drive. These are preferred methods for most data aggregators or value-added partners, as well as for users in geographical areas with connectivity and bandwidth constraints. However, these methods have some restrictions. Data delivery on hard drives can be slow, and FTP may not be a viable option with large datasets. With the growth of cloud computing and reliance on software and content as a service, imagery providers are building platforms that allow for quick access to a Web map service, which quickly delivers information to those who need it.

Imagery also can be shared across multiple organizations in a more timely and cost-effective manner. In an emergency response situation, imagery is an asset that can be leveraged by many different groups in the response effort, as well as after an event for remediation and rebuilding efforts.

An orthorectified, accurate, high-resolution Web map service can empower users with fast and predictable situational awareness. For example, EyeQ, GeoEye’s Web dissemination and management platform—often used with software tools such as Google Earth and Esri’s ArcGIS—allows users to perform deeper analysis as the event unfolds. Users also can capture changes as they occur and push that information out in near real time. Current, quick and accurate information delivered in a format that’s easily used by technical and nontechnical users is the key to timely and effective response.
Most of the time, raw pixels are taken by users or a source provider’s value-added partner and transformed into a more usable product. For many users, orthorectifying and mosaicking images to create a highly accurate and tightly controlled image base is important, especially when entering into remediation and rebuilding efforts. Applications like logistics and transportation planning, engineering and network operations require more accurate data than what might come right off a satellite. Current satellites do deliver highly accurate imagery—for example, GeoEye-1 collects imagery that allows for mapping features within less than 5 meters without manual intervention. However, when meshing imagery with other datasets and base maps, some work may need to be done to ensure features, such as road networks and utility lines, line up accurately.

The Opportunity
As the geospatial industry embraces concepts such as software or content as a service, and leverages well-established Open Geospatial Consortium-compliant service protocols, users involved in response efforts, including preparation and prevention, can have access to the best imagery at all times. Platforms such as EyeQ, used in conjunction with well-established tools like ArcGIS and Google Earth, can create tight lines of communication among users and providers, resulting in quicker access to timely information.

In the case of the Japan earthquake, imagery was delivered to entities such as the United Nations and other relief organizations in mere hours (see “Geospatial Community to the Rescue,” page 10). Users were able to create maps and other materials that allowed for quick response. Immediate situation assessment was important for gaining precious intelligence into the ground situation.

The concept of disseminating data via the Web isn’t new, but leveraging the Web to enable collaboration, management and image delivery is at the cutting edge of emergency response efforts. With every event, providers learn more about user needs, and as the technology continues to evolve, imagery providers will be at the forefront of such development efforts. When providers can deliver data quickly, first responders can act fast. And in any emergency situation, speed is everything.