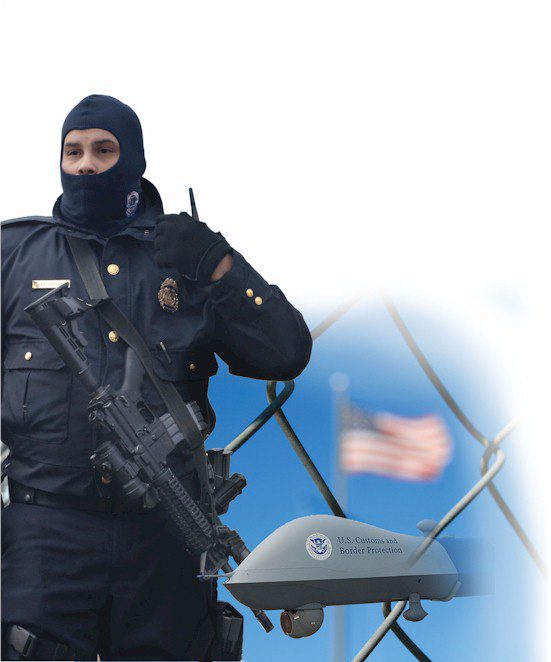 Although traditional geospatial applications often have proceeded at a fairly leisurely pace, applications in emergency management almost always stress the need for speed. Responders use the term “golden hour” to denote the first 60 minutes following an event—the window during which there’s the greatest opportunity to save lives. For example, in the case of the bombing of the Murrah Federal Building in downtown Oklahoma City in 1995, the explosion caused an immediate need for all relevant geospatial data, including evacuation routes, locations of hospitals and building plans.

Yet in this and other recent disasters it has taken hours and in some cases days to assemble the trained personnel, hardware, software, data and network communications of an operational geospatial capability. Paradoxically, people all over the world were able to access geospatial data about New Orleans in the immediate aftermath of Hurricane Katrina through services such as Google Earth, but those on the ground in the impacted area waited days for power and Internet connectivity.

A 2007 National Research Council (NRC) report, Successful response starts with a map: Improving geospatial support for disaster management, has several recommendations designed to get the geospatial operation up and running faster. Central to these is the need for overhead imagery, whether from satellite, unmanned aircraft or helicopter.

In some recent events, people with cameras in helicopters have provided the first images of damage used to plan an organized response. In many cases the lack of prior arrangements for imagery acquisition from commercial sources has been a major impediment to progress, as has the lack of arrangements for distributing such imagery to those who need it most.

Emergency responders often work in difficult environments that are in sharp contrast to a highly functional office environment comprising a desktop geographic information system (GIS). The New York City firemen climbing the stairwells of the World Trade Center on Sept. 11, 2001, were working under conditions that were often dark, full of smoke and dust, and noisy, and they were often unable to communicate with their peers. This was no place for laptops. Evidence has shown that the most useful geospatial product in such situations frequently is a paper map. Indeed, there often can be a strong aversion by emergency responders to sophisticated electronics. As a result, the NRC report calls for research on how to adapt geospatial data so they’re useful within the particular environments in which responders must work and for efforts to improve the training of first responders in the use of geospatial technologies.

It’s important to keep in mind that emergencies inherently are unpredictable, particularly when—the precise timing of an event—and where—the area impacted by the event. Within the impacted area of Hurricane Katrina were two states and numerous cities and counties. Literally hundreds of federal, state and local agencies shared some degree of responsibility for the impacted area, and numerous nongovernmental organizations also were involved, including the Red Cross, several universities and the volunteer GIS Corps.

The need to coordinate and communicate created perhaps the greatest impediment to the effective use of geospatial technologies, and problems of an institutional nature quickly came to dominate the aftermath. Thus, there’s a strong argument for giving institutional issues the highest priority in future research. 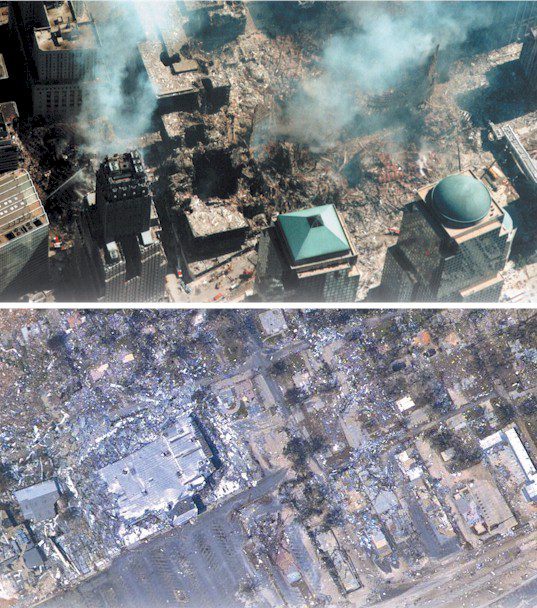 Whether responding to human-induced disasters such as 9/11 (top) or natural catastrophes such as Hurricane Katrina (bottom), geospatial professionals have learned the United States needs to improve emergency preparedness.

Can Cultures Communicate?
Professionals committed to GIS have been accused of overselling, but a more subtle issue is the cultural divide that separates specialists in emergency management, and more broadly in homeland security, from specialists in geospatial technologies. The NRC report concludes that the two groups learn remarkably little about the other’s domain in formal education, as courses in geospatial technologies often give little attention to emergency management, and courses in emergency management often make little mention of GIS.

But the divide is deeper than that, as thinking spatially is different. People who think spatially likely begin with a map and with the perception that Earth’s surface is a continuum. Cities and states aren’t lists and tables, but places distributed over a landscape that varies at all levels of detail, from the coarsest to the finest. Spatial thinking places great emphasis on context, the importance of surroundings in understanding events and patterns of behavior.

By contrast, emergency responders see the event, its victims, and their alternative courses of action as primary. If geospatial technologies are used, it’s because they, like many other kinds of tools, are found to be useful, but they have no deeper level of commitment to any one class of tool. They will likely agree that geospatial technologies are important, but unlikely to see them as in any way unique or more important than any other technology, or as a basis for organizing their workflow. After all, while GIS is important in all aspects of homeland security, and in many activities of the U.S. Department of Homeland Security, it’s not to date reflected at a high level in the organizational structure of that agency (though its Geospatial Management Office plays an important role), or in the topics of the various research centers it has funded to date. GIS is everywhere in the agency, but at the same time it is in danger of being nowhere. 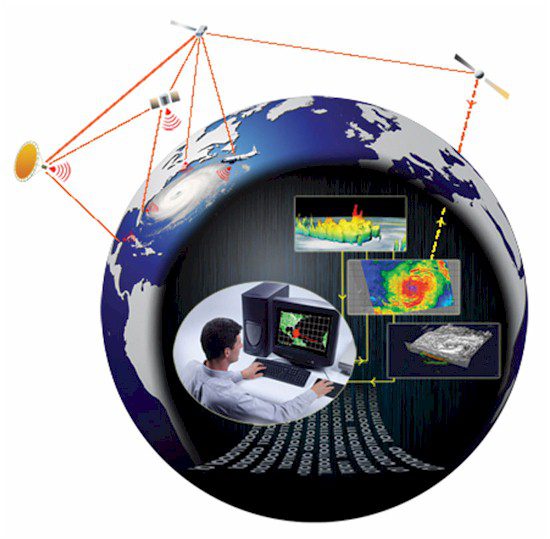 Sensor web technologies can tie systems together, forming an infrastructure of seamless connectivity among all sensors, nodes and users.

Emerging Themes
There are several important areas of geospatial research that deserve mention and that may provide challenges and opportunities for the community.

Dynamics
The roots of GIS lie in the map, a paper document that once printed is difficult to update.
Maps are expensive to produce, and thus they tend to be directed at the most popular applications and to emphasize features that change the least. We make maps of topography, roads, cities, soils and vegetation, but not of the instantaneous positions of vehicles, or of flows or transactions. This is a powerful legacy for GIS, and the technology remains largely concerned with the static aspects of Earth’s surface and is difficult to adapt to its more temporal aspects.
However, this situation is changing. Significant efforts have been made in recent years to develop specialized GIS software for dynamic simulation (e.g., PCRaster, http://pcraster.geo.uu.nl/), for the analysis of travel behavior, and more generally for the representation and analysis of the entire range of geographic dynamics. In the area of homeland security, work on dynamics is helping to produce real-time simulations of evacuation; models of the spread of atmospheric plumes and flood surges; and a host of techniques for analyzing intelligence and making inferences about potentially dangerous events.

Geo-collaboration
Another research thread focuses on the use of the Internet and geospatial tools to foster and facilitate collaboration among the various actors in matters of homeland security.
Nowhere is this more valuable than in emergency management, when effective communication between all of the various responders and decision-makers can often make the difference between success and failure. Responders arriving on the scene often have only partial knowledge of the event and lack the kinds of local awareness and skills needed to be effective. Better communication is needed not only between responders and their managers, but also peer-to-peer between responders and peer-to-peer between managers and their agencies. Work at Pennsylvania State University (www.geovista.psu.edu/work/projects/geocollaboration.jsp) is exploring this notion of geo-collaboration and prototyping the kinds of tools needed to make it operational and effective.

Sensor Networks
A sensor network can be defined as a distributed network of devices that know their positions and that sense various aspects of their environments and report them to a central server. They might consist of video cameras or microphones in the case of surveillance, temperature sensors in advance of a wildfire front or sensors distributed in the world’s oceans to provide early detection of tsunamis. Many existing networks meet this definition, including the weather stations that provide minute-by-minute monitoring of Earth’s atmosphere. Sensors may be carried on people or vehicles; in the former case one thinks of the atmospheric pollution sensors carried by children involved in research on asthma, while the latter case includes participants in research on travel behavior that have allowed their vehicles to be tracked. Clearly many applications of sensor networks are of importance to homeland security. As sensors become cheaper, smaller and more versatile, the associated problems of computation, compilation and distribution of their signals is emerging as a major topic for geospatial research.

Volunteered Geographic Information
Finally, and related in many ways to sensor networks, is the topic of volunteered geographic information (VGI), a form of user-generated content that is attracting significant attention in the geospatial research community. VGI is exemplified by a growing collection of Web sites, including Wikimapia (http://www.wikimapia.org/), OpenStreetMap (http://www.openstreetmap.org/) and Flickr (http://www.flickr.com/), all of which allow their users to enter data regarding places on the Earth’s surface in the form of descriptions, actual street maps and photographs, respectively. Blogs and Wikis that use geo-tags to allow contributors to reference information to points on the Earth’s surface are other forms of VGI. Such efforts are engaging thousands of comparatively unqualified amateurs in what amounts to an increasingly significant mechanism for creating geographic information. Research is clearly needed on the social aspects of the phenomenon (What makes people do this, and are they accurate?), the technical aspects (Can techniques be devised to mine this information?) and the conceptual aspects (What do people need to know to be more effective?). 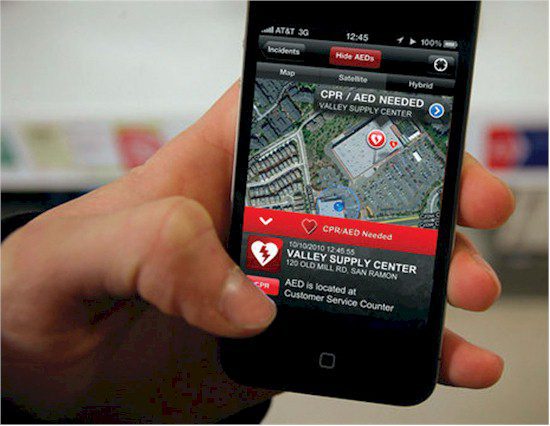 Although VGI is normally associated with the creation of conventional geographic information through unconventional means, it also can play a significant role in homeland security. One can imagine a future in which citizens within the footprint of a disaster are able to contribute what they know and can see around them to central repositories using such devices as mobile phones, and in which the resulting information is made almost instantly available to responders. Useful intelligence, in both a commercial and a military sense, can be gleaned from the content contributed by citizens to blogs or contained in e-mail. This is a different world from the traditional one, in which virtually all geographic information was compiled and distributed by central government agencies, and it’s growing rapidly.

Making the World a Safer Place
Thinking about the importance of geospatial technologies, one is struck again and again by the need for a concerted effort to make them more available and to educate people in their effective use. In the hands of a user who thinks spatially, geospatial technologies are amazingly powerful extensions of the senses, revealing things that would be impossible to obtain in any other way. Geospatial technologies replace the tedium, inaccuracies, and lack of replicability of more traditional approaches with a workflow that’s readily shared and understood. Much remains to be done to enhance their specific applicability to issues of homeland security, but a vast range of opportunities exist.

At the same time one would be foolish not to recognize the problems that can result from their misuse. Results from computers can easily appear more accurate than they really are because of the precision of the machine. Users may be overconfident in the results of simulations, conveniently ignoring the uncertainties that are inherent in any model of the world. The logical precision of a GIS may be at odds with the much more casual and ambiguous way in which humans interact with the planet, giving different names to the same place, making maps that sometimes reveal as much about the agendas of their makers as they do about the real world they are intended to represent. Geospatial technologies aren’t readily adapted to representing the different views and perceptions people have of their surroundings, or the ways some cultures manage and conceptualize space. In the final analysis, however, it’s impossible to avoid the fact that geospatial technologies have an enormous amount to offer homeland security, and that their greater and more effective use will help to make the world a safer and more secure place.