From seismic planning to pipeline routing, accurate elevation data can support a range of oil and gas applications.

Oil and gas exploration and development involves building an understanding of Earth’s surface and subsurface through a variety of methods, including ground survey, seismic acquisition and Earth observation (EO) techniques. With ever-improving sensor capabilities, EO approaches are playing an important role in developing knowledge of surface conditions, including geology, terrain and the surrounding environment. Such knowledge helps organizations reduce risk, increase efficiency and fulfill their environmental commitments.

Accurate elevation data, such as Airbus Defense and Space’s WorldDEM , make a significant contribution to oil and gas projects during the exploration and development stages. Exploration activities often take place in remote and inaccessible areas, which may lack topographic information of sufficient accuracy or detail of a consistent standard.

Accurate elevation information can assist in a range of oil and gas application areas, including seismic planning, geological and geomorphological mapping, pipeline routing and infrastructure planning. Such elevation data are particularly powerful when integrated with other satellite datasets, including optical imagery and radar data. 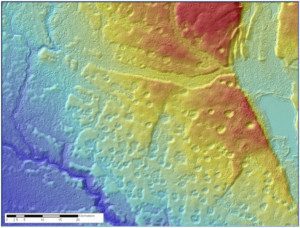 A WorldDEM for an area in Mozambique shows circular depressions caused by sinkholes developing in limestone, potentially influencing the location of seismic acquisition lines. The north-south trending valley to the right of the image is thought to be fault controlled and is the southern extension of the East African Rift System, a geological feature dominating East Africa. Red areas represent higher elevation

However, elevation data aren’t the only EO dataset used in this planning process. Other optical and land-cover
information is required to assess areas that are environmentally sensitive or
potentially hazardous, thereby reducing risk and minimizing the impact of seismic collection.

Hazardous regions include areas prone to flooding, subsidence or instability such as sand dune migration or mass movement. In addition, an understanding of the distribution and extent of habitation and agricultural activity can be used in survey planning to minimize the impact on local populations.

Poor coupling with the ground and a seismic source and receiver can be related to several surface or near-surface factors, including lithology and features such as Karst, rocky terrain and soft sediment. As shown in Figure 1, understanding the distribution and extent of these factors is critical during planning.

Quantitative analysis of variation in terrain and land cover and the interaction between them provides a more accurate understanding of the factors influencing seismic planning. Geographic information system (GIS) technology can be used to effectively assess multiple geoinformation datasets appropriate to seismic planning. A GIS can be used to combine and weight individual data layers to help establish optimum routes. 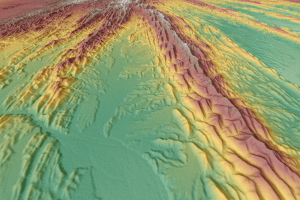 An understanding of surface geology helps researchers screen areas for exploration and target seismic acquisitions and fieldwork more effectively. Many exploration areas of exploration lack existing geological mapping at a suitable scale or accuracy, and locations may be challenging to access for logistical or security reasons.

As shown in Figure 2, WorldDEM can contribute to the process by assessing geomorphology and textural features to interpret geological structures. Optical EO sensors with suitable spectral bands or radar data can complement such elevation data. Similarly, where vegetation cover is dense, more emphasis is placed on the use of elevation models and techniques that highlight variations in terrain and texture. 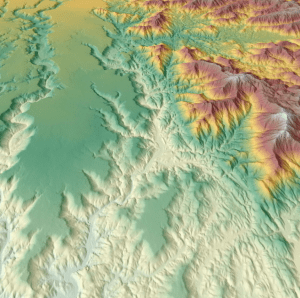 Logistics planning and operations support typically are required during the prelicense, exploration, development and decommissioning stages of the onshore workflow. As shown in Figure 3, such development planning is critical for areas with a range of terrain and climate characteristics.

At an early stage, topographic baseline mapping is essential to understand variations in terrain and infrastructure distribution and quality. WorldDEM can be used as a key input in the mapping process by generating contours and assessing land cover.

A regional study may progress to more detailed mapping as a project focuses on more specific areas. Such mapping is used to provide support to logistical operations and ground survey planning as well as to ensure health and safety during exploration. Prospective pipeline and road routes also can be planned more effectively with accurate, up-to-date information about a region’s landscape, geology, elevation and geo-hazards.

WorldDEM combines accuracy and global coverage with a range of applications and can make a significant contribution to upstream oil and gas projects throughout a project’s workflow. For follow-up studies, where higher resolutions and accuracies are required, bespoke models at 1-meter grid spacing can be generated using high-resolution stereo satellites such as Pléiades, particularly with the use of ground control points. For some applications, coarser resolution is available with a suite of datasets produced from SPOT 6 data, allowing users to select an appropriate elevation model for their particular application. 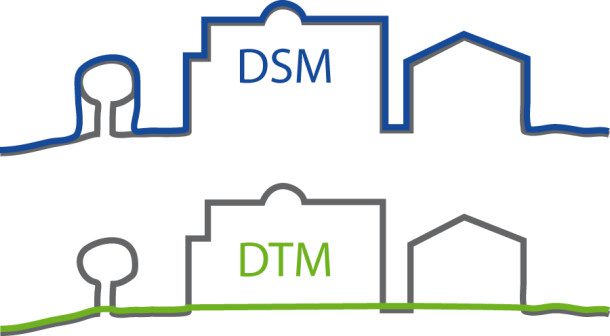 A DSM represents Earth’s surface, including all objects and vegetation on it, whereas a DTM represents the bare ground.

WorldDEM is the derived product of the TanDEM-X satellite mission, a public-private partnership between Airbus Defense and Space and the German Aerospace Centre (DLR). Airbus Defense and Space holds the exclusive commercial marketing rights for the data and refines the raw elevation models produced by DLR according to the needs of commercial users worldwide. The company initially will offer three WorldDEM products, ranging from an unedited DSM to edited DSMs, which offer assured hydrological consistency
(e.g., water body flattening, consistent river flow, shoreline editing, etc.). The company also will offer a bare Earth terrain model void of man-made objects and vegetation.