Aviation maps and navigation products have gone digital in both two and three dimensions. A current trend in the development of such mapping products is the integration of information that can enhance situational awareness for pilots in the air and on the ground.

Flocks of birds in flight can pose dangers to air travel. USDA uses geospatial technologies to report these potential hazards and minimize problems.

When US Airways Flight 1549 struck a flock of Canada Geese shortly after takeoff from New York's LaGuardia Airport in January 2009, only the flying skills of an alert and well-trained crew prevented catastrophe. Captain Chesley Sully Sullenberger calmly ditched the Airbus in the Hudson River, where all 155 passengers were saved by nearby vessels.

Now known as the Miracle on the Hudson, the event focused the public's eye on the dangers that wildlife, most often birds in flight, pose to air travel. Although fatalities are relatively rare, one 2008 study cited by the U.S. government estimated bird strikes cost civil aviation in the United States $650 million per year in aircraft damage. 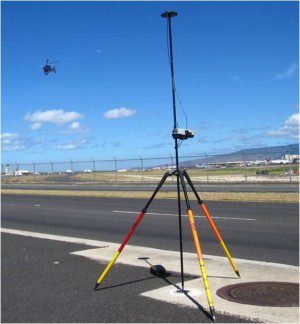 GPS ground control points were used to create a 3-D visualization of Centennial Airport near Denver.

Helping to keep airports and animals safe is the Airport Wildlife Hazards Program run by the U.S. Department of Agriculture (USDA). Through this program, USDA biologists observe, map and assess potential wildlife dangers on or near airport facilities. Special attention is paid to repeated bird flight patterns in the airspace above the runways as well as habitats on the ground that might attract hazardous bird species that can bring down or seriously damage an airliner. Features that provide shelter or food, such as standing water or certain types of vegetation, are considered hazards, which are reported to airport managers.

When making field observations, the biologists mark locations onscreen, delineating paths of birds in flight, point locations of wildlife or boundaries of habitat on the ground. Information on bird flight, favored nesting locations and other details are saved in ArcGIS software from Esri (www.esri.com), including digital imagery of area airports.

The digital maps have been well received by airport authorities, and geospatial technology is viewed as a pathway to expand the use of wildlife information, along with other data, in maps created for aviation operations. When USDA learned that CompassData (www.compassdatainc.com), a Colorado firm that's part of the Compass group of geospatial companies, was collecting GPS ground control points (GCPs) and making highly accurate orthorectified images of airports worldwide, including Centennial Airport near Denver, they saw the potential for collaboration. After a brief discussion, CompassData agreed to create a 3-D visualization of the airport, showing prevalent bird flight paths as an unfunded proof-of-concept project.

The idea of representing wildlife hazards on digital aviation maps dovetailed with an international effort to collect geospatial data for airports, said CompassData Vice President Hayden Howard. The FAA Airport GIS (AGIS) program is looking to leverage datasets that are consistent with FAA business practices to enhance its Next Generation Air Transportation System.

CompassData specializes in collecting high-quality GCPs and other field data for GIS, photogrammetric and remote sensing applications. In the past two years, the firm has captured and archived GCPs at 435 airports around the world for a variety of clients. At about a quarter of those airports, the clients asked CompassData to use the GCPs to orthorectify high-resolution satellite imagery from DigitalGlobe (www.digitalglobe.com).

As is true with any map products generated from aerial or satellite imagery, accuracy depends on the quality of the GCPs used to process and rectify them, said Howard.

According to Howard, consistency often is overlooked in GCP collection. Regardless of whether GCPs are captured in Colorado or Asia, they must meet identical accuracy and quality standards so the map products created with them are consistent worldwide. This is especially critical in aviation mapping, because commercial aircraft travel from one airport to another, relying on consistent navigation charts and landing approach maps.

During a period of two decades, CompassData has developed standardized ways to collect and process GCPs that ensure every point is consistent and meets rigorous accuracy specifications. The Â accuracy of GCPs collected at the airports has been better than the 20-25 centimeters mandated by most international aviation organizations. CompassData archives these airport GCPs in a worldwide database of more than 26,000 points available commercially for immediate purchase.

For airports, we use our standard GCP-collection procedures to survey photo-identifiable control points with GPS, said Howard. Depending on the end products that will be generated, our crews collect five to 20 GCPs on and around an airport.

Our goal was to create a 3-D environment of Centennial Airport to show where the typical flight paths of birds crossed the airspace and migration patterns of other animals that traversed the airport grounds, said CompassData Project Manager Jeff Southard.

A CompassData field crew acquired seven GCPs at Centennial Airport, and the crew was able to obtain relatively new airborne light detection and ranging (LiDAR) data of the region from a publicly available U.S. Geological Survey website. The vertical accuracy of the elevation data in the LiDAR dataset was 15 centimeters. The third dataset required for the project was a high-resolution satellite image of the area acquired by DigitalGlobe's WorldView-2 satellite.

According to Southard, the crew merged the datasets to build the 3-D environment using standard processing techniques, mostly in Esri ArcGIS and SocetGXP software from BAE Systems (www.geospatialexploitationproducts.com). In the first processing step, the GCPs were used to aerotriangulate the satellite image (tie the image to its precise location on Earth). Then the LiDAR digital elevation model (DEM) was used to rectify the satellite image. The LiDAR DEM also was used to extract height information of above-ground features to create the 3-D model. The resulting 3-D imagery is used as a base to visualize the wildlife vector data.Â According to Southard, the scene covers about 50 square kilometers, including the airport property and surrounding area.

The native accuracy of the satellite image is advertised at 3.5 meters, but by using highly accurate GCPs, CompassData achieved sub-85-centimeter horizontal accuracy in the orthorectified image. Ground control was key to the final product's accuracy. Without it, the ortho-image accuracy would have remained in the 3.5-meter range.

Once the 3-D model was generated, CompassData imported the data layers USDA biologists had made during wildlife observations at the airport. The layers included ground habitats and bird flight patterns over the runways displayed in their approximate locations within the digital 3-D airport model. In 3-D visualization software, this sub-meter scene would enable a pilot to fly through the airspace, understanding where birds may be encountered. 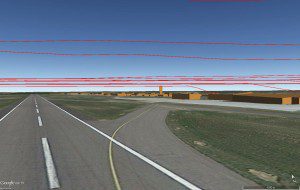 A variety of geospatial datasets were merged to show where the typical flight paths of birds crossed Centennial Airport's airspace and migration patterns of other animals that traversed the airport's grounds.

The Centennial Airport 3-D visualization project represents the type of situational awareness that may be integrated into future aviation mapping products, according to Mike Gyde, GIS Business Unit leader at Performance Software (www.psware.com), an avionics services and products firm. He believes aviation safety will improve by displaying sensor fusion features, such as weather, air traffic and other data, on 2-D and 3-D maps. These next-generation products ultimately will reduce pilot workload while increasing situational awareness.

Satellite and aerial imagery are being used to create these next-generation map products. However, these products must be certified under the DO-200A standard for processing aeronautical data devised by FAA and its European equivalent, the European Aviation Safety Agency, to ensure they satisfy rigid accuracy specifications. Ground control and GCP-verified imagery processed to DO-200A standards are becoming important components of new aviation products, such as aerodrome map databases and 3-D obstruction maps. CompassData has applied for a DO-200A certification to provide GCPs and verified imagery for these and other aviation products.

Satellite images, air photos and LiDAR point clouds are ideal datasets to generate fused 3-D environments, but the accuracy of the final products has to be sub-meter to meet some of the FAA specifications, said CompassData's Howard. Accurate and consistent GCPs are critical in developing these next-generation aviation map products.