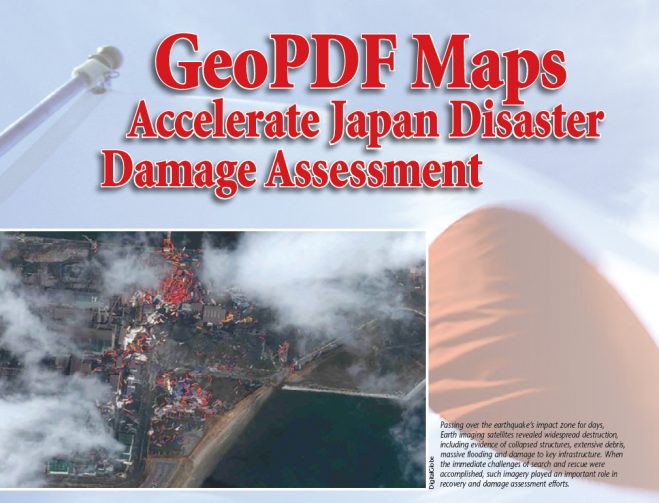 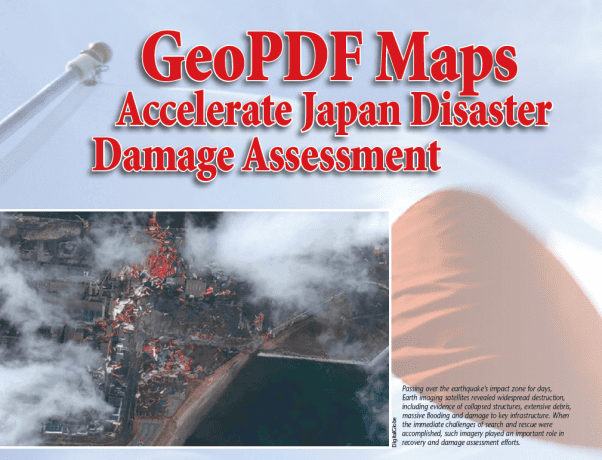 GeoPDF maps, which can compress geospatial data by more than 20:1, are easy to distribute to the field where users can readily view, update and share information.

When a 9.0 magnitude earthquake struck northeastern Japan onMarch 11, 2011, it was the worst in the country’s history and the fourth most powerful ever recorded. The earthquake was so strong that it moved Honshu about eight feet east and shifted the Earth on its axis by estimates up to 10 inches. The ensuing tsunami unleashed waves up to 128 feet high and reached six miles inland.

Together, the killer quake and tsunami took the lives of more than 15,000 people, left nearly 8,000 missing, displaced 450,000 more and damaged in excess of $300 billion worth of property. Adding to the unprecedented scope of these natural disasters was the compromise of the multireactorFukushimanuclear plant complex, which released radiation necessitating evacuation of the surrounding area. 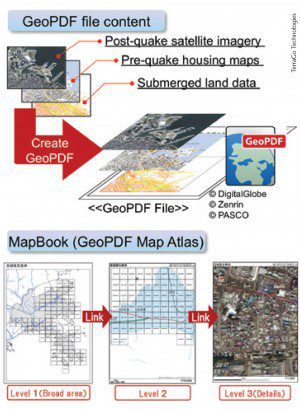 When the immediate challenges of search and rescue were accomplished, attention shifted to recovery and damage assessment efforts. Federal, prefectural and local governments needed a way to rapidly disseminate, update and share information to determine which buildings and homes were damaged and to what degree so property owners could receive government-issued disaster victim certificates. Once the certificates were issued, compensation could be made to property owners and reconstruction could begin. Complicating matters was the
inability to physically enter the nuclear evacuation zone to conduct on-the-ground inspection of property damage.

Because the earthquake so radically altered and submerged the coastline, geospatially
referenced maps and imagery were the obvious choice by which to visualize and exchange information. In addition, because no one could enter or fly over the evacuation zone near the Fukushima nuclear plant due to radiation exposure issues, satellite imagery was the only way to safely assess damage.

Hitachi Solutions proposed that by using pre- and post-March 11 maps and satellite imagery, combined with property boundary information, damage assessment could be accomplished much more quickly and, as a result, clerical work of issuing disaster damage certificates could be simplified. The maps would need to cover the more than 600 square miles affected by the disaster in the Iwate, Miyagi and Fukushima prefectures.

Because of the disaster’s urgency, the maps needed to be produced rapidly and be easily distributed and updated. Hitachi turned to TerraGo Technologies for its geospatial collaboration software and GeoPDF solutions to produce the map atlas. Hitachi Solutions is the TerraGo distributor in Japan and East Asia and a joint development partner.

The map atlas was produced in just two days after deciding the specification. Hitachi then officially donated it to the Japanese Cabinet office, which in turn distributed discrete maps from the atlas on DVDs and USBs to the respective prefectural and local governments.

GeoPDF maps, which can compress geospatial data by more than 20:1, are easy to distribute to the field where users can readily view, update and share information. Users were able to confirm the condition of affected areas by comparing the different map layers and use geographical coordinates when adding information and images to each location. Certification of property damage, which previously had
required confirmation on site, could now be carried out much more quickly by comparing residential maps containing homeowners’ names and post-disaster satellite images.

Hitachi also provided Nikon-TrimbleGPSPathfinder SB handheld devices with TerraGo Mobile software to write data on the GeoPDF maps, permitting on-site uploading of current georegistered data and images to the GeoPDF map atlas. GeoPDF maps can support the inclusion of georegistered audio, video, notes, Web services and other intelligence. In addition, the company supplied its StarBoard interactive whiteboards, which can be placed in disaster response headquarters and other command and control centers to more efficiently visualize spatial information and coordinate support efforts.

Even in situations where on-site visual inspection was necessary, the use of the Global Positioning System (GPS) and geographical coordinates in the atlas greatly expedited the inspection process. The GeoPDF maps and satellite images also enabled area-by-area damage assessment for use in planning reconstruction schedules. Furthermore, progress could be monitored by uploading the status of documented recovery efforts on the GeoPDF map atlas.

By the end of May 2011, approximately 150,000 of the 180,000 applications for disaster victim certificates had been processed, with GeoPDF maps playing a critical role. In the Fukushima nuclear evacuation zone, where on-the-ground inspections weren’t possible, 183 property owners received Risai Shomeisho disaster victim certificates on the basis of the GeoPDF satellite imagery maps.