Each of RapidEye's five satellites measures less than one cubic meter and weighs 150 kg. The satellites contain identical sensors, are equally calibrated and travel on the same orbital plane at an altitude of 630 km. Together, the five satellites can collect more than 4 million square kilometers of 5-meter-resolution, 5-band colorÂ imagery every day.

The successful 2008 launch of the RapidEye satellites marked a turning point in the Earth observation industry. The lessons learned offer a roadmap to getting future satellite programs”government and commercial”from the drawing board to the launch pad.

In the mid-1990s, the German Space Agency queried the nation's aerospace industry to propose ideas for how Germany might enter the nascent commercial remote sensing business. Munich-based Kayser-Threde GmbH identified agriculture as a sector that held tremendous potential for satellite image applications but was poorly served by the U.S. Landsat and European SPOT systems. In both cases, the infrequent revisit cycle of the satellites hindered their abilities to cultivate the commercial agriculture market.

Executives at Kayser-Threde saw precision farming, crop insurance and food security among the many agricultural submarkets that could benefit from periodic satellite monitoring. Other industries with similar resource management needs, such as forestry and environmental compliance, also were targeted as potential markets. In 1998, RapidEye AG was established as a remote sensing services company with the specific objective of tapping these underserved segments.

At the time, the Earth observation industry was focused on higher spatial resolution because that's what the military wanted, said Dr. Manfred Krischke, the founder and first CEO of RapidEye. For the markets we had in mind, high spatial resolution wasn't the thing. The real issue was the availability of data.

Rather than think about satellite and sensor designs from the start, Krischke and the RapidEye team spent more than a year investigating specific agricultural applications of imagery from the end-user perspective, trying to find out what they needed and wanted. It became clear that daily revisit was a priority to ensure cloud-free images were collected at every critical crop growth phase. Additionally, the data collection had to cover a wide area each day, providing insurance adjusters, agronomists, foresters and forecasters a regional view of conditions on the ground.

Daily revisit and wide-swath capacity became our top-level requirements, said Krischke, adding that a limited number of well-chosen spectral bands at 5-meter spatial resolution would meet the application needs of the target markets.

The other crucial consideration for RapidEye was budget. From the start, the plan called for funding the venture mostly with private capital from banks and investors. The company would raise much of the money during system construction but had to have a solid budget number to get started.

As many entrepreneurial ventures do, the RapidEye team calculated a budget based on the funding it was likely to receive from investors given the revenue estimates from its proposed service offerings. RapidEye arrived at a budget of $150 million to $200 million to build and launch its constellation (including initial operational losses), about one-tenth the cost of Landsat 7 and one-fifth that of IKONOS 1. 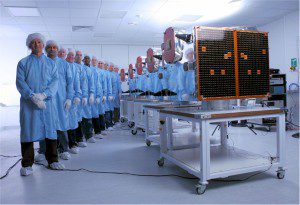 All five RapidEye satellites were lined up in SSTL's cleanroom, with some of the assembly, integration and test staff, before being sent to Baikonur in Kazakhstan for a successful launch on Aug. 29, 2008.

By the time the RapidEye team approached satellite developers to discuss the planned system, its executive staff already had some technical specifications in mind based on high-level concepts. They knew, for example, the need for daily revisit would require multiple small satellites deployed in a constellation. Familiar with the small satellite buses developed by Surrey Satellite Technology Ltd. (SSTL), RapidEye entered into nonexclusive discussions with the Guildford, U.K.-based company.

Technical expertise aside, selecting SSTL as a candidate to build the satellites proved a wise decision. The company already had a reputation for innovation by serving the commercial entrepreneurial market, a global clientele with one characteristic in common”tight budgets. SSTL played devil's advocate, challenging the mission requirements until technical specifications fell in line with budget numbers.

At the time, the satellite market was dominated by large institutional or government customers for whom budgets and business cases have often been a secondary consideration, said Dr. John Paffett, CEO of Surrey Satellite Technology US (SST-US), Englewood, Colo. That approach differs significantly from that of the entrepreneur.

For the commercial or entrepreneurial customer, closing the business case is essential, and system financing is often the most complicated aspect of the program. The design process must focus on achieving as many of the core mission requirements as possible within a finite financial envelope.

According to Paffett, it hasn't been uncommon for SSTL to study initial technical specification for a new satellite project and find that 80 percent of the cost was driven by 20 percent of the requirements. In the end, some of the bells and whistles the customer once thought they needed must be omitted or radically changed.

Our job is to close the business case by challenging the client to understand what they really want, said Paffett. It's an iterative process where we examine every subsystem, operating parameter and technical specification and question whether it is mission critical.

And RapidEye was no different. Its original ambitions far exceeded its anticipated funding levels. Over a three-year period, the SSTL team engaged in a give-and-take with RapidEye until a system design was agreed upon that satisfied the most important end-user requirements”frequent revisit and wide-swath collection”while staying within the budget dictated by private-sector investors.

The process of challenging their specifications became almost antagonistic, said Paffett. I don't know how many times we lost the RapidEye account during that period.

Krischke, who successfully teamed with Berlin-based BlackBridge to reacquire RapidEye's assets out of insolvency in 2011 and is now CEO of Munich-based CloudEO AG, recalls the back-and-forth discussions with SSTL generally had two outcomes. Some capabilities had to be eliminated outright because their costs greatly exceeded the budget. For other specifications, however, the SSTL team devised technical, programmatic or contractual innovations that achieved an identical, or at least similar, end result for less expense than what was envisioned originally.

For example, one of the early constellation designs included three satellites. Each would have to carry two imaging sensors to capture a wide enough swath on the ground to achieve the desired daily repeat coverage. This configuration inflated costs in several ways. Â Carrying two sensors would have necessitated the use of a 400-kilogram bus, one of SSTL's largest and more expensive. And two sensors per bus obviously cost more than one each.

The added expense of this design extended beyond mere hardware purchases, explained Krischke: Data from focal planes in two sensors on the same satellite would have required corrections during processing on the ground, which would have been expensive and time consuming.

Many iterations later, the final configuration included five smaller, less-expensive SST-150 satellites, each weighing just 150 kg, carrying a single imaging sensor with a relatively wide swath at 78 km. Although daily coverage could have been achieved with four of the smaller buses, the addition of the fifth satellite enabled a more pragmatic and cost-effective means to provide system redundancy and robustness. This meant RapidEye could suffer a complete failure of one of its five satellites and still provide daily global coverage simply by making minor orbit modifications to the four remaining satellites.

Another programmatic change upon which both companies eventually agreed gave considerable heartburn to investors. An idea initially was proposed to split the satellites and launch two on one Russian Dnepr rocket and three satellites on a second. If a launch failure occurred, part of the investment would remain. But it was argued that an incomplete constellation would have little value because daily revisit capability would be lost. The company spared significant expense by launching all five satellites on one rocket.

Although some technical specifications were modified, others had to be dropped completely from the plans. Early on, RapidEye considered including short-wave infrared bands to detect subtle differences in crop conditions. Eventually, the company settled on five bands, which covered the blue, green, red, red-edge and near-infrared portions of the spectrum and performed the lion's share of proposed agricultural applications.

Short-wave bands would have been nice to have, but they would have doubled the sensor costs, said Krischke.

An operational change that RapidEye also had to accept was data downlink capacity. The company hoped the satellites would transmit image data down to ground stations at 160 megabits per second (Mbps), providing enormous collection capacity on each orbit. Although the technology existed at the time, the required hardware would have cost more than the satellite bus. RapidEye settled for an 80-Mbps downlink, which still enabled the constellation to capture a staggering 4 million square kilometers of imagery per day.

We understood there were cost drivers we could not change, said Krischke, adding that while the constellation design underwent many changes, we never sacrificed on the top-level requirement that would drive our commercial products”frequent revisit.

The RapidEye constellation achieved orbit on Aug. 29, 2008, about a year later than anticipated due to political problems at the launch site coupled with unexpected contracting demands imposed by an investment group. The lost revenue from the delay played a role in the company filing for bankruptcy protection in 2011 and its recent purchase by BlackBridge and a team of private investors.

A time series over Gettysburg, S.D., demonstrates Blackbridge's new agricultural imagery service, which leverages the collection capacity of the RapidEye constellation to offer agro-consulting firms and other customers an enormous pool of multitemporal, orthorectified 5-meter imagery collected throughout the season.

Despite these issues, RapidEye successfully developed its target agricultural markets and reached considerable and sustainable revenue by the time it was sold, according to Krischke. He believes the bankruptcy overshadows the fact that RapidEye was a technical success, which is remarkable considering how innovative its basic concept was at the time.

Paffett agrees. He has been tasked with bringing Surrey's entrepreneurial satellite development approach to the United States with the SST-US subsidiary. In the intervening years, SSTL has continued to rely on the RapidEye business case blueprint with several other customers, including developing nations. In particular, the Disaster Monitoring Constellation (DMC), which consists of several remote sensing satellites constructed by SSTL and operated for the Algerian, Nigerian, Turkish, British and Chinese governments by DMC International Imaging, illustrates how small satellite solutions can be used to compete with more conventional Earth observation systems. Paffett predicts this unique approach is destined to become common in the aerospace industry.