In recent years, energy companies have relied increasingly on high-resolution satellite imagery to plan the onshore seismic survey operations that are crucial to hydrocarbon exploration activities. Image data improves the safety, accuracy and efficiency of these projects. Today, with the advent of satellite-derived bathymetric mapping processes, high-resolution imagery also is being deployed in offshore seismic activities with many of the same benefits.

Onshore or off, the basic concept behind seismic mapping is the same. Sound waves are transmitted to the land or seafloor surface where they penetrate the underlying strata, reflecting and refracting in different ways depending on the characteristics of the rock layers below. The returned signals are captured by sensors on the surface and eventually processed into 2-D and 3-D maps of the subsurface geologic structure, potentially revealing hydrocarbon reservoirs.

In the terrestrial environment, sound waves in the form of low-frequency vibrations often are applied directly to the ground by large vibroseis trucks. High-resolution satellite imagery assists in planning the locations of the seismic survey grids with an emphasis on determining land use and land cover types so the trucks can be operated on solid, stable terrain with maximum effectiveness and minimal danger to the crews.

Offshore, the vibrations usually are emitted from seismic arrays towed behind vessels designed specifically for this purpose. The sound waves travel through the water column before penetrating the seafloor, interacting with the lithology, and reflecting back to sensors onboard the ship. The data sets are collected and processed just as they would be for surveys on land. 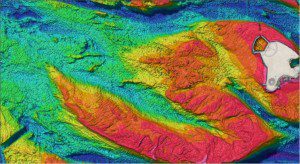 TCarta Marine provides medium-resolution bathymetric maps from the near-shore littoral zone out to the continental shelf to depths of 3,000 feet. Derived from a variety of sources, including navigation charts, ship tracklines, light detection and ranging (LiDAR) surveys and satellite imagery, these products offer a hydrocarbon exploration company a first look at the seafloor’s structure. Visible structures sometimes give hints about the underlying lithology, providing valuable information used to determine where seismic surveys should be targeted.

“The bathymetric products can also show hazards, such as reefs or other submerged features that could endanger the vessel or snag the expensive seismic array,” said Simons. “Based on this information in the past, the seismic team either decided to avoid the area or take a closer look by deploying sonar.”

Also operated from purpose-built ships that are usually smaller than the seismic vessels, side-scan sonar collects extremely accurate water depth data. The application of sonar increases substantially in shallower waters where submerged hazards are more numerous and pose greater risks to the larger seismic vessels and their equipment. The detailed bathymetric data collected by sonar reduces some of the risk of operating in shallow water.

“Near-shore operations in shallow waters are dangerous for both the ships and the marine environment,” added Bud Pope, president of Boulder, Colo-based Spatial Energy (www.spatialenergy.com), a wholly owned subsidiary of DigitalGlobe (www.digitalglobe.com), Longmont, Colo. “In addition to assisting in seismic survey planning, exploration companies often collect detailed bathymetric data to establish a baseline of environmental conditions on the seafloor. They don’t want to harm reefs and other habitats.”

Although highly accurate, side-scan sonar is expensive and time consuming. And because it too is towed by ship, sonar poses its own risks to the habitat below. Until recently, side-scan sonar and related technologies were the only option for direct, detailed measurement of water depths in shallow coastal zones. This changed, however, with the introduction of commercial satellite-derived bathymetric mapping techniques.

“In many cases, satellite-derived bathymetry can replace sonar surveys in the seismic planning process for shallow waters,” said Simons.

The appeal of the satellite bathymetric data lies mainly in the data’s price and timeliness. Sonar surveys can take months to complete, but satellite-generated products can be delivered in a fraction of the time at about a quarter of the cost. Most importantly for a seismic project on a deadline, an orbiting Earth observation satellite doesn’t require layers of government permits to collect data in the near-shore region, which is usually the case for a vessel.

“The process, which incorporates all eight multispectral bands, relies heavily on that satellite’s coastal blue band,” said Needham. “At 400-450nm, the wavelength of this band is relatively short, allowing it to detect natural light that has traveled deeper into the water column with less absorption than the other bands.”

Water clarity is also a factor in how far down Proteus can accurately measure the depth of the seafloor. Whenever possible, the company’s image processing technicians try to acquire WorldView-2 data sets that were obtained during periods of low turbidity and free of excessive algal growth. Low wind and high sun angles are preferred for the acquisition conditions onsite. Proteus either obtains suitable imagery from the DigitalGlobe archive or requests a custom collection by the satellite during favorable weather.

“Depending on the availability of ground-truth data, the accuracy of our satellite-derived bathymetric products is usually 10 to 15 percent of overall depth,” said Proteus Project Manager Richard Flemmings. “For many seismic planning projects, that will be all they need to plan their shallow-water operations.”

According to Flemmings, in coastal seismic planning, the uses of satellite-derived bathymetric data are the same as water depth measurements from any other technology. The planners are looking for hints of subsurface structure while looking for seafloor obstacles that might damage equipment or endanger crews. 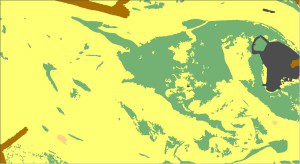 Pope predicts satellite-derived bathymetric data will play an increasingly larger role in shallow-water seismic operations as well as other infrastructure development projects being planned by oil and gas companies in the coastal zone. The financial advantages and ease of use make the technology attractive to energy organizations in a variety of applications.

Looking further into the future, Pope believes that satellite-derived seafloor classification maps, also offered by Proteus as part of the bathymetric-derivation process, will be embraced by the oil and gas industry. Already, onshore seismic planners rely heavily on terrestrial land use/land cover image maps to pinpoint surface rock composition and terrain that are conducive to vibroseis use. For shallow-water seismic planning, seafloor habitat and land cover type sometimes must be considered as well.

“Exploration companies are trying to do as much as possible with satellite data before sending people into the field,” said Pope. “It’s the way things are done today.”