Scheduled to fly for a year and designed to last a year and a half, NASA's Earth-Observing-1 satellite (EO-1) celebrated its 10th anniversary on Nov. 21, 2010. During its decade in space, the satellite has accomplished far more than anyone dreamed.

All of the missions come down to one thing: We're the satellite people can try things on, says Mandl. He calls EO-1 NASA's on-orbit test bed, and the name rings true.

Testing New Technology
EO-1 was commissioned as part of NASA's New Millennium Program, set up to develop and fly technology that would reduce the risk and cost of future science missions. In short, NASA told its engineers to find a way to fly faster, better and cheaper.

EO-1's primary purpose was to demonstrate that the Advanced Land Imager (ALI) was a suitable follow-on instrument for Landsat, relates Bryant Cramer, the program manager at Goddard during EO-1's development and launch. Like Landsat-7, ALI records seven wavelengths of light reflected from Earth's surface. ALI also records an additional two wavelengths to improve measurements of forests and crops, coastal waters and aerosols.

Later, an innovative new instrument, the Hyperion imaging spectrometer, was added to the mission. Hyperion records more than 200 adjacent wavelengths of light to even better understand the makeup of Earth's surface.

EO-1 succeeded beyond anyone's expectations, says former project scientist Steve Ungar. He credits the mission's success to EO-1's crackerjack team of engineers and scientists, who were drawn to the mission because they recognized they could have a stake in the future of satellite technology. 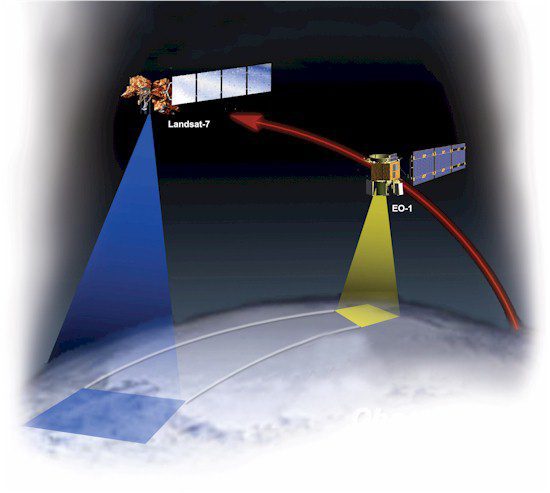 Hyperion
Hyperion is a hyperspectral instrument, a change in technology that's like going from black-and-white to color television, according to Mandl. Hyperion is probably the future of remote sensing, says Cramer.
Other remote sensing instruments”multispectrometers”measure discreet wavelengths of light. It's as if your eyes could only see red and blue light; you could tell much about the world based on how much red and how much blue you saw, but your vision would have gaps in the green tones. A hyperspectral instrument corrects this color blindness by measuring many more wavelengths of light.
The science behind the hyperspectral instrument is spectroscopy, says current EO-1 project scientist Elizabeth Middleton. Spectroscopy is the study of constituents of materials using specific wavelengths, she says. Hyperion measures the chemical constituents of Earth's surface.
Space-based imaging spectroscopy enables a wide range of science, including tracking the amount of carbon plants take out of the atmosphere everywhere from the Amazon rainforest to the Alaskan tundra. It also has been used to find evidence of microbial life in the Arctic and to monitor volcanic activity.
Perhaps the most important thing Hyperion has done, according to Middleton, is teach the community how to work with complex hyperspectral data. Soon Germany will launch the next hyperspectral instrument, EnMap, followed by NASA's HyspIRI satellite, which is still in the planning stage. Both missions build on lessons learned from Hyperion. 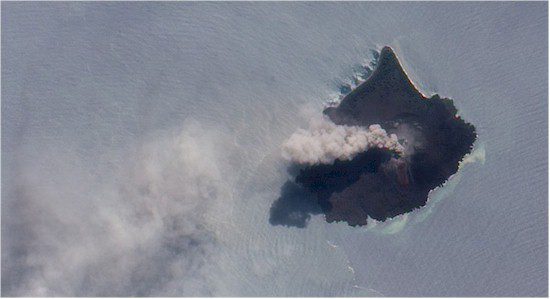 Advanced Land Imager
According to Cramer, ALI was built to test new technology and to provide a safe technology shift for future Landsat missions. The Landsat series of satellites has provided a continuous record of changes in Earth's landscape from 1972 to the present.
ALI differs from previous Landsat sensors because of how it takes images. Previous Landsat instruments scanned from side to side, like a whiskbroom. The image is built from horizontal strips of information. ALI, on the other hand, is more like a push broom. It has detectors arranged parallel to one another and facing forward, and they collect information in vertical strips. This arrangement eliminates the need for the sensor optics to move from side to side, and fewer moving parts means less chance of failure, according to EO-1 engineer Stuart Frye.
After 10 years of operation, ALI has proven that the push-broom technology is stable and reliable enough that the next Landsat satellite uses the same design. The Landsat community is treating push-broom sensors like we've been building them for years, says Cramer. That's a tribute to EO-1.

NASA's On-Orbit Test Bed
As the EO-1 mission has aged, perhaps the most critical innovation has come from its on-board computer. EO-1 has two separate computer processors with 256MB of extra memory each. It meant we had excess capacity to try new things, relates Mandl.

The first new software loaded onto EO-1 was the Autonomous Science Experiment, an on-board intelligent scheduling tool that allows the satellite to decide for itself which images Hyperion and ALI should take. The on-board scheduler prioritizes requests based on what they are for (ranked by theme) and the weather.

It's a customer-driven method of running a mission, says Mandl. Anyone from an archeologist to a disaster response agency can request images. Flying a mission with a customizable user experience is one of EO-1's greatest achievements, he adds.

Sometimes the customers targeting EO-1 are other satellites. As part of SensorWeb, EO-1 automatically acquires images that are triggered by other satellites. For example, EO-1 monitors 100 volcanoes. When another satellite detects a hot spot at any of them, EO-1 automatically acquires an image on its next overpass. Hyperion records the temperature and position of lava flows, and ALI tracks ash plumes.
SensorWeb and the scheduling tool have saved money. Initially, we were spending about $7,500 per image to acquire them, explains Cramer. Now the cost is less than $600 a scene.
EO-1 is one of the cheapest of NASA's Earth missions, confirms Middleton. These cost savings mean anyone can target EO-1 and access all data free, making it useful to a growing range of people.
EO-1 has done so many different things, NASA got three or four missions for the price of one, says Cramer. We achieved all of the things that we hoped for and then some. 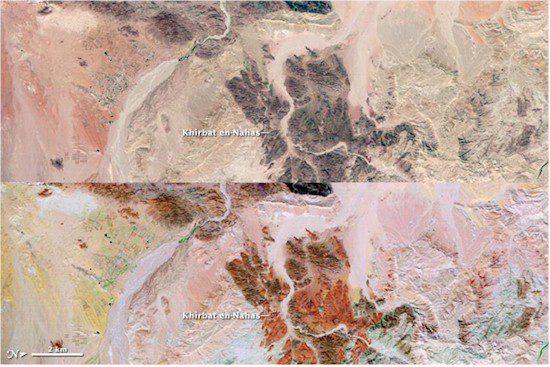 The hundreds of bands in hyperspectral imagery enable researchers to differentiate minerals and rocks that appear similar in visible light. Outcrops near Jordan's Kirbhat en-Nahas that are uniformly dark in natural color (top) are variegated in false color