The number of civil and commercial Earth observation (EO) satellites expected to launch between 2010 and 2019 will more than double during the next decade, expanding to 280 from 135, creating a surge in the supply of EO data in response to increasing demand from a growing user base. As a result, the satellite-manufacturing sector is expected to generate revenues of more than $26 billion during the next 10 years. In 2009, commercial data sales, primarily from high-resolution optical data, which account for 83 percent of total commercial data sales, reached $1.1 billion. This all-time-high manufacturing and commercial data activity has led to EO market growth at each step along the value chain, ranging from increasing government investment to rising commercial data demand. Along with this recent and predicted growth have come opportunities and challenges for this still-maturing industry. Emerging Programs
EO missions from emerging programs will contribute to staggering growth in the number of satellite launches. More than 40 countries are expected to launch EO missions by 2019, up from 26 nations in 2009, underscoring governments’ growing desire to deploy autonomous remote sensing systems. New EO programs will develop within emerging space programs across the globe as nations turn to EO to gain access to space, a less-costly approach than other applications such as communication and navigation satellites. These initial EO satellite forays focus on generating generic Landsat-type data that can be used for a wide range of applications, such as agriculture, resources monitoring, oil and gas, etc. Later generations will offer increasingly higher accuracy and resolution.

Emerging nations often develop satellites through technology transfer, building on the expertise of established foreign satellite prime contractors. The result is a growing satellite export market. These initial experiences will provide a springboard into future ventures; following first-generation missions, second-generation replacement satellites are more advanced as illustrated by programs in Nigeria and Algeria.

Driven by Defense
The size and health of the EO sector remains strongly tied to defense and security spending. With the market for commercial data valued at $1.1 billion in 2009, only three companies represent 65 percent of global market share: DigitalGlobe; GeoEye; and SPOT Image, which was rebranded recently with Infoterra as Astrium Geo-Information Services. For each company, however, governments are the primary customers, particularly for defense and security applications.

This point was emphasized by the recent 10-year multibillion-dollar EnhancedView contracts awarded by the National Geospatial-Intelligence Agency (NGA) to U.S.-based DigitalGlobe and GeoEye. The contracts support a long-term commitment to the U.S. commercial industry by the U.S. government, providing the companies a foundation from which to develop their businesses. One glaring difference between the U.S.-based companies and SPOT Image is the formers’ dependency on the home-government customer. More than 70 percent of the U.S. companies’ revenues come from U.S.-based customers, whereas 70 percent of SPOT Image’s 2009 revenues were from non-European entities. Given this, a likely high priority for U.S. operators will be to expand business outside of the United States.

Government involvement also is evident in other commercial systems, whether through public-private partnerships (PPPs), such as Infoterra’s TerraSAR-X satellite and RapidEye’s constellation; through a data pre-purchase mechanism and PPP, such as Canada’s RADARSAT-2; or simply commercializing data from government systems through dedicated entities such as the dual-use COSMO-Skymed constellation through e-GEOS and the Pleiades mission through SPOT Image. 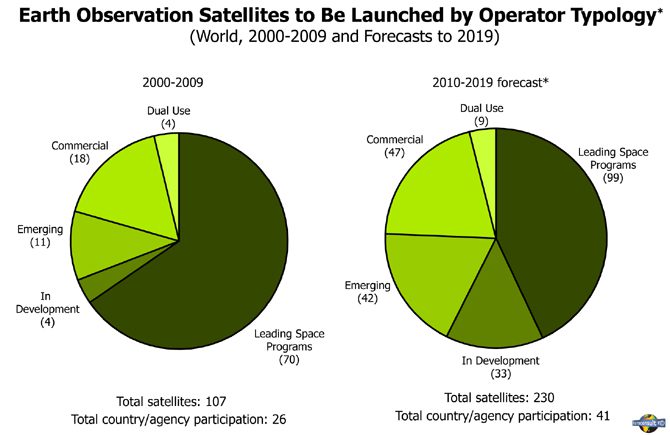 Technology Innovations
Beyond financial mechanisms, several space and ground segment technologies during the next decade could help promote a wider uptake of remote sensing by more than cash-conscious governments. These technology trends allow for delivering smaller, cheaper and more responsive EO spacecraft.

The development of cheaper, lighter, multiuse generic platforms also is driving down EO satellite costs, resulting in lower barriers to entry. For example, on average, overall mass at launch will be cut nearly in half in the coming decade—from more than a ton to 650kg.

In addition, ground segments will diversify, with continued developments in global distribution networks aimed at better addressing the needs of a diverse user base. Service providers, resellers and operators concur that the Internet is a key enabler in disseminating EO data and services. It’s anticipated that future Web-based platforms for storing and distributing data sets and products, such as Google Earth, will continue to provide innovative delivery platforms from which users can obtain data and services. Internet platforms and distribution is expected to be the important tool for attracting enterprise and private users in the effort to bring EO data to the masses.

Environmental Monitoring
Although national defense is recognized as the primary market for commercial high-resolution optical and radar EO data because of strong image intelligence needs, leading civil government programs have a clear focus on environmental monitoring, meteorology and climate change. NASA, the European Space Agency, the Japan Aerospace Exploration Agency and other leading agencies make up the majority of the more than $5 billion civil government investment in EO programs, and those programs have a clear focus on climate change monitoring. For example, the European Union conceived the Global Monitoring for Environment and Security (GMES) program to deliver an operational system comprised of Sentinel missions to civilian European stakeholders interested in a variety of thematic applications, including marine, atmospheric, land, emergencies, and humanitarian and security services. Other agencies also have dedicated investments to support environmental monitoring missions.

Globally, energy, natural resources management and location-based services primarily drive enterprise use of EO data. With final products and services considered important to the largely technology-agnostic enterprise users, there’s an opportunity for value-added service providers to strengthen their roles and revenues using free or lower cost data sets. The free and open access data policy advocated by GEOSS and planned for the GMES Sentinels is viewed as a new opportunity to stimulate EO market growth by providing a more user-driven business model. With the product development cost greatly reduced by free or reliable low-cost data sources, value-added service providers will be able to provide more cost-effective services, as well as use the data in research and development.

Future Challenges
Industry expansion will bring plenty of growth potential, along with challenges that will be felt along the value chain. Policy makers’ challenges will be two-fold: With an increasing number of missions involving multiple government stakeholders, how will governments encourage cooperation for data sharing and minimize mission duplication? The Committee on Earth Observation Satellites (CEOS) will have a key role in coordinating activity and encouraging cooperation through its objectives to serve as a focal point for international EO coordination and optimizing EO benefits through cooperation.

As data commercialization efforts continue, policy makers will have to decide on coherent policies that will encourage industry and commercial opportunities while allaying security concerns over the dissemination of high-resolution data. Such regulation on data reception and distribution exist in the United States, and these policies are in the process to be developed elsewhere; the next step would be to achieve global coherency in what should and shouldn’t be allowed in the commercial domain.

For the commercial sector, industrial expansion will bring opportunities along the value chain. Manufacturers will seek to tap into the growing export market for EO satellites, and new manufacturing and equipment providers will emerge—particularly those that have been assisted by technology transfer activities, such as South Korea’s Satrec Initiative. Competition is expected to increase, and the battle for market share should intensify.

To reach the full potential of $4 billion in data sales in 2019, commercial data distributors must develop their customer base. The first step entails moving from a predominantly home-government-dependent model, with operators expanding their customer bases to foreign governments and private enterprise. For the three main operators, this may require establishing regional networks for data and services sales markets. 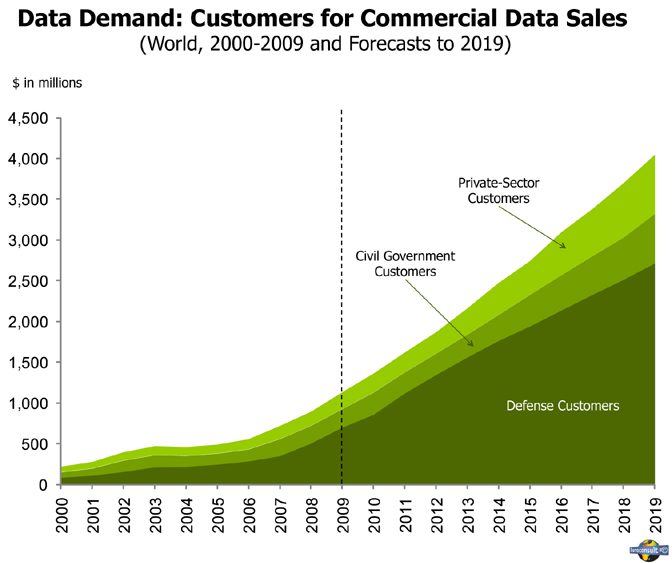 Growing competition also is expected from commercial operator newcomers and government programs commercializing their own data. To maintain and grow market share, operators will develop increasingly capable satellite constellations (higher accuracy, faster delivery) and look to expand business in terms of service offerings that can promote vertical integration, particularly moves toward more value-added products.
One issue affecting EO revenue growth is the relative immaturity of addressable markets to the EO solution. EO operators need to educate potential end users and demonstrate benefits provided by EO data, using the role of Google Earth and similar virtual globes as examples. For example, EO operators and service providers will need to decide whether to supply a full portfolio of services and delivery mechanisms via integrated Web platforms or to instead concentrate on data delivery through local reseller networks that can often provide regionally tailored value-added service solutions.

Meanwhile, service providers will be looking to maximize the use of an influx of free or low-cost data, e.g., through the European GMES initiative. The next step will be to identify additional operational services with returning customers requiring geospatial solutions. If the EO sector is to develop as a commercial business, identifying such services will be key to driving the industry forward.