Geospatial Community to the Rescue

Following the devastating March 11, 2011, earthquake and tsunami that struck Japan, a host of geospatial companies provided pivotal disaster response information and services. Many of the same companies and more will contribute to cleanup and rebuilding efforts.

The disaster has been described as Japan's worst crisis since World War II. The World Bank says it will take up to five years to rebuild and recover from the widespread damage. Cost estimates vary widely, but the median is around $300 billion.

Geospatial tools will be instrumental in helping the country's decision makers design a better, safer infrastructure. Much improvement can be made to stabilize its nuclear program. A BBC timeline of nuclear plant accidents indicates that even before the current disaster at the Fukushima Daiichi power plant, the only other instances of a potentially serious nuclear accident worldwide since 1999 occurred in Japan.
Additionally, with so much debris to dispose of, careful attention will have to be given to landfill management. Rebuilding Japan's road, pipeline and power transmission infrastructure, along with tens of thousands of homes, schools and commercial buildings, will require sound planning aided by geospatial logic to succeed.

The companies and organization profiled here were among Japan's first responders. 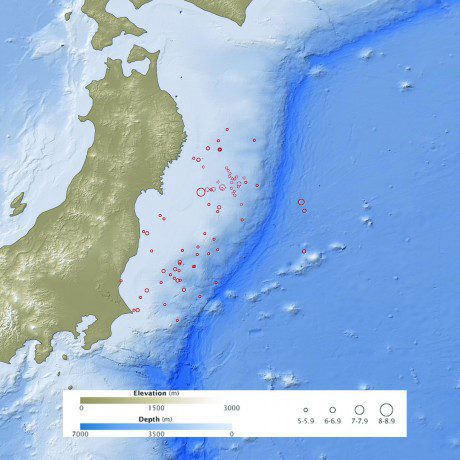 According to the U.S. Geological Survey, the earthquake occurred at a depth of 15.2 miles (24.4 kilometers) beneath the seafloor. This map shows the location of the March 11 earthquake, as well as the foreshocks (dotted lines) and aftershocks (solid lines). The size of each circle represents the magnitude of the associated quake or shock. The map also includes land elevation data from NASA's Shuttle Radar Topography Mission and ocean bathymetry data from the British Oceanographic Data Center. 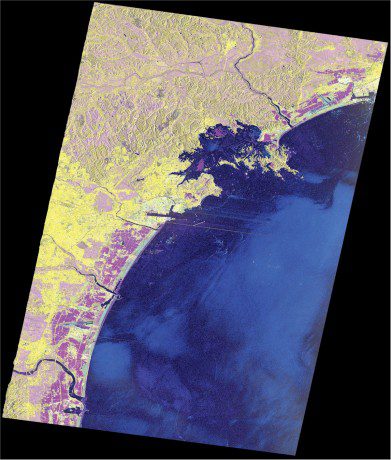 A TerraSAR-X damage map shows the area inundated by the tsunami in purple. Astrium Geo-Information Services has provided data from the German radar satellite for free via the Group on Earth Observations Supersite at http://supersites.earthobservations.org.

Astrium Geo-Information Services (http://www.astrium.eads.net/), Toulouse, France, has made its satellite imagery experts available to the international community for Japan's recovery efforts. The company, including subsidiaries Spot Image and Infoterra, offers an extensive portfolio of products and services derived from airborne and satellite remote sensing data. Astrium's experts analyze satellite images of Japan on a daily basis, providing vital information about the state of roads, bridges, buildings, nuclear and other plants. Such interpreted data assist ground crews and emergency teams as they tackle the crisis, providing current information when undertaking rescue efforts, assessing the damage to infrastructure and coordinating potential evacuations. 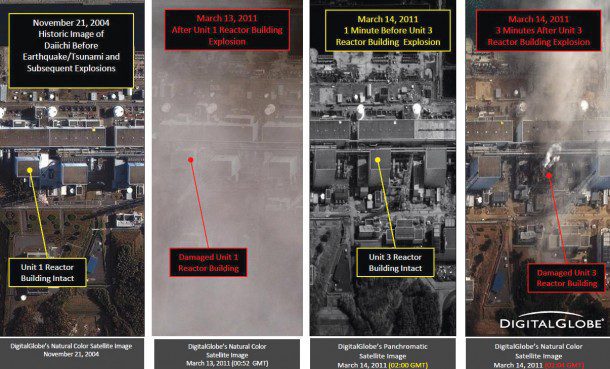 A DigitalGlobe FirstWatch Imagery Report shows the earthquake/tsunami damage and the aftermath of subsequent explosions at the Fukushima Daiichi nuclear power plant. The plant's reactor cooling systems were disabled by the events, leading to nuclear radiation leaks and triggering a 30-kilometer evacuation zone surrounding the plant. The emergency is the worst involving a nuclear plant since the Chernobyl disaster 25 years ago.

DigitalGlobe (http://www.digitalglobe.com/), Longmont, Colo., has used its satellite constellation to provide detailed before-and-after perspectives of the aftermath of the earthquake and resulting tsunami. Passing over the impact zone for 10 straight days, DigitalGlobe satellites revealed widespread destruction, including evidence of collapsed structures, extensive debris, massive flooding and damage to key infrastructure. They witnessed explosions and failures at nuclear facilities (including images collected less than one minute before and three minutes after an explosion at the Fukushima Daiichi nuclear power plant), documented the state of the country's highways, and assessed damage at the main ports and refineries. In addition, the company's online Web and analytic services, FirstLook and FirstWatch, have enabled browsers to see damage on a street-by-street basis, enabling in-country organizations to deliver aid and medical care and attempt to rescue those trapped in collapsed buildings. 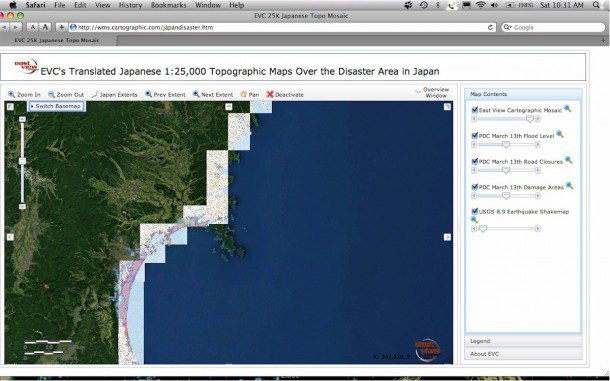 East View Cartographic (http://www.cartographic.com/), Minnetonka, Minn., performed rapid geoname translation for Japanese-produced topographic maps in tsunami-affected areas. Immediately following the earthquake and tsunami, the company was approached by the Japan Map Center in Tokyo to make English versions of 18 1:25,000-scale topographic maps over the affected area in and around Sendai, Japan. Relief workers from around the world needed print mapping in English. East View Cartographic performed the task in four business days, using automated geoname conversion processes and human editing. Additionally, the company created a mosaic of the map sheets and built a Web mapping service to host the data for viewing around the world at http://wms.cartographic.com/japandisaster.htm. 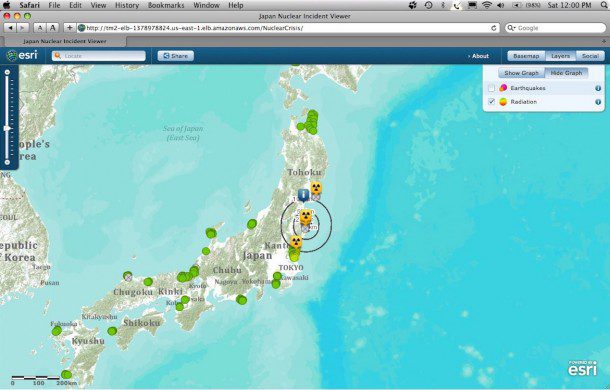 Esri (http://www.esri.com/), Redlands, Calif., released Japan nuclear impact, earthquake and tsunami map applications that visualize a wealth of data. See aggregated reports of property damage, hazards, evacuations, and power outages; you can also view nuclear plants at risk and related demographic information, videos, photos and Ushahidi reports related to radiation. The applications show initial impacts of the disaster, such as a model of tsunami movement throughout the Pacific Ocean and the permanent shift in landmass as a result of the quake, to what's taking place now, as reported by people on the ground via Twitter, YouTube and Flickr. An index of the maps is available at www.esri.com/services/disaster-response/japan-earthquake-tsunami-2011/index.html. 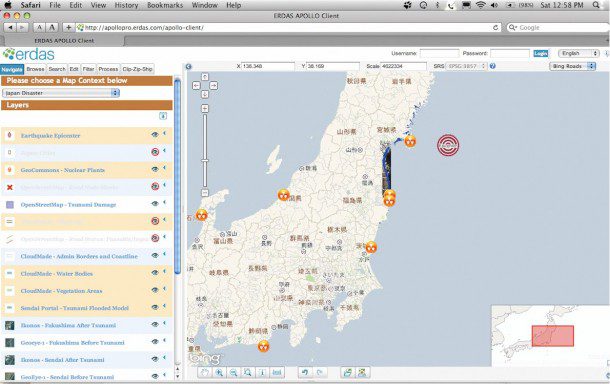 ERDAS (www.erdas.com), Norcross, Ga., is providing access to datasets that illustrate the devastation in Japan as a free Web service that enables users to access various data. The company adds new imagery, maps and vectors as they become available. ERDAS now has pre- and post-earthquake images for Fukushima, which is the location of compromised nuclear reactors, and Minamisanrikucho. The pre-earthquake imagery consists of GeoEye-1 half-meter resolution data collected on Nov. 15, 2009. The post-earthquake imagery consists of IKONOS 1-meter resolution data collected March 12, 2011. To see the imagery, visit http://erdas.com/Resources/DisasterRelief/JapanRelief.aspx. 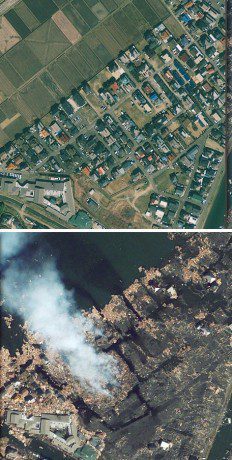 GeoEye has posted several before-and-after slider images on its Web site to reveal the extent of the devastation.

GeoEye (http://www.geoeye.com/), Dulles, Va., has been delivering satellite imagery to relief agencies, governments and the media. As soon as the news broke that a major earthquake hit the northern coast of Japan, the GeoEye team began collecting post-earthquake imagery and provisioning its online Web services platform, EyeQ, so its partners in Japan could use it to aid their country. The company also gave Google special permission to load its Japan data into Google Earth Enterprise on the Go (www.youtube.com/watch?v=UHL9sDbBGnk) on laptops that were provided to first responders traveling from the United States to Japan so they could use the data even where they didn't have Internet connectivity. Emergency first responders and the geospatial community have used the imagery as a base map to produce multiple-layer relief maps to assist with damage assessment, route planning and other crucial aspects of the relief effort.

MDA's Systems Information Group (http://www.gs.mdacorporation.com/), Richmond, British Columbia, Canada, has provided imagery acquired by the RADARSAT-2 satellite over the devastated areas in Japan to support disaster management efforts through the Canadian Space Agency's participation in the International Charter Space and Major Disasters. The International Charter is an organization working toward providing a unified system of space data acquisition to those affected by natural and man-made disasters. The first image of the disaster was acquired on March 12, 2011, hours after the powerful earthquake hit. RADARSAT-2's ability to collect imagery independent of darkness or inclement atmospheric conditions is a valuable support during times of emergency to supplement airborne and ground resources for local and regional damage assessment. 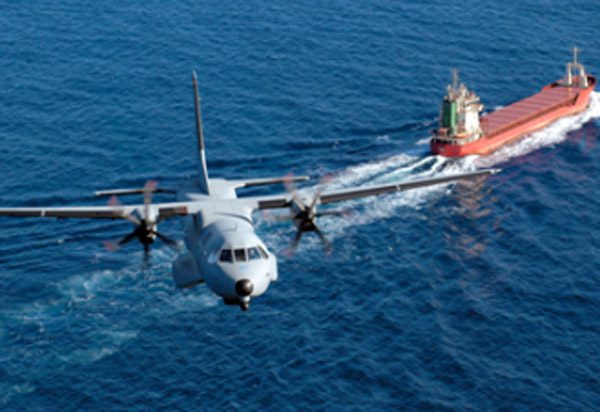 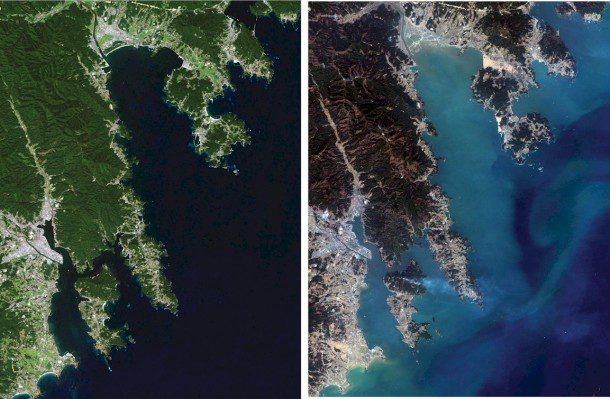 RapidEye imagery reveals widespread destruction in the city of Kesennuma in Miyagi Prefecture.

RapidEye (www.rapideye.de), Brandenburg/Havel, Germany, the only geospatial information provider to own and operate a constellation of five identical Earth observation satellites, released its first images of Japan following the tsunami and the preceding earthquake on March 12, 2011. The Center for Satellite Based Crisis Information, which is part of the German Aerospace Agency (DLR), contacted RapidEye shortly following the breaking news of the earthquake and resulting tsunami. DLR is a member of the International Charter, which was activated on March 11 by the Japan Aerospace Exploration Agency. Charter members have used the imagery and resulting analyses to provide as much knowledge as possible about the disaster to relief and governmental agencies. 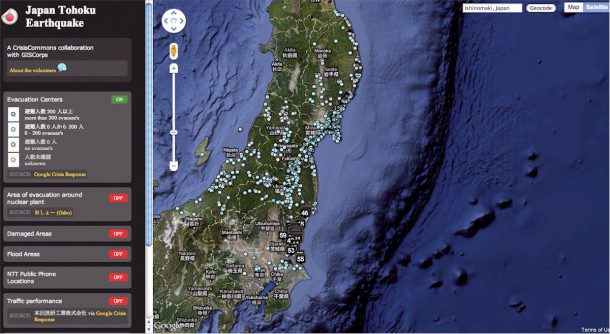