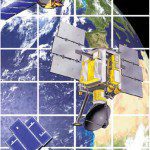 The DEVELOP team is providing valuable information and maps about how future climate change will impact LaRC's functionality and sustainability.

Educating future technological leaders and quantifying the negative effects of climate change have emerged as two important issues facing the science and engineering communities in recent years. Although these two concerns may seem unrelated, a NASA program is taking an integrated approach to addressing them through the common threads of geographic information system (GIS) development and remote sensing.

In 1998, NASA launched DEVELOP, a training and development program for high school, undergraduate and graduate students in the fields of computer science, engineering and Earth sciences. Students participating in the program have the opportunity to conduct interdisciplinary, applied science research using NASA satellite and remote sensing technologies to benefit community groups and other external users. Past DEVELOP projects have included research to track the movement of Saharan dust across the Atlantic and to predict movements of fish populations using coastal upwelling. 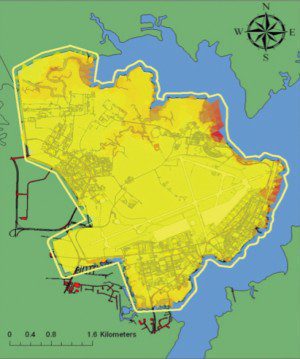 results to investigate the susceptibility of the infrastructure at NASA’s Langley Research Center (LaRC) to the future effects of climate change. The team, which includes one high school student, four undergraduate students and one graduate student, applied GIS and remote sensing to study the interaction between the center and its changing environment. In addition, the team is providing useful information for improving the center’s future infrastructure development.

LaRC is located close to the mouth of the Chesapeake Bay and at sea level, so the center is highly susceptible to climate change effects such as rising sea levels, stronger tropical cyclones and increasing frequency of vector-borne diseases. Because all of these factors may translate to lost productivity, the DEVELOP team set out to identify and quantify the negative effects of climate change to support LaRC decision makers. 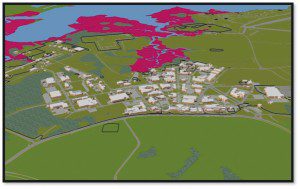 Rising sea levels, which will be a natural byproduct of climate change, pose a considerable concern for the use and development of LaRC facilities. Using a numerical model and light detection and ranging (LiDAR) elevation data on the Atlantic’s predicted flood surge levels from the Virginia Institute of Marine Science (VIMS), the DEVELOP team set out to predict the effects of sea level rise at LaRC. Because flooding will impact many buildings and key infrastructure at the center, the team used a combination of predicted sea level rise and VIMS model data to locate exactly where major flooding may occur and identify steps that can be taken to mitigate damage and lost productivity.

“We already know water levels will rise, but the important task for us now is to quantify the rate of this rise and its effect on the center,” explains team member Robert Bradley, a senior studying oceanography and GIS at Old Dominion University. “GIS structure mapping allows us to integrate all necessary information quickly and efficiently.”

Team members use such data to identify where natural buffers, such as wetlands, can be preserved and enhanced to mitigate LaRC damage. 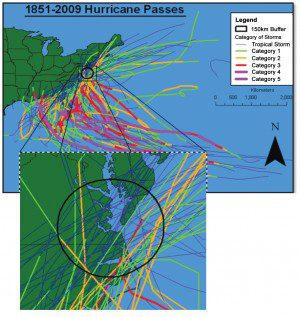 Historical data on hurricane strength and trajectories over the LaRC area may be valuable in directing future infrastructure development.

Storm Strength
As global temperatures rise, many experts naturally expect the strength and impact of tropical cyclones to increase, which poses a direct threat for the waterfront LaRC. Because of potential infrastructure damage, the DEVELOP team plotted historical storm event data from the National Oceanic and Atmospheric Administration (NOAA) in ESRI’s ArcGIS software to detect the effects of future storms. In particular, the team aims to study the strength and speed of future storms, as well as to detect which tracks such storms are likely to follow should they impact LaRC.

“Analyzing tropical cyclone data has allowed us to quickly evaluate the types of storms that have affected the study area,” relates Nathan Makar, a senior at Pennsylvania State University studying meteorology and team lead for the climate change project.

By analyzing predictions and historical data with GIS, the team has been able to identify which buildings and areas of LaRC are at risk. Such information may be valuable in directing future infrastructure development. 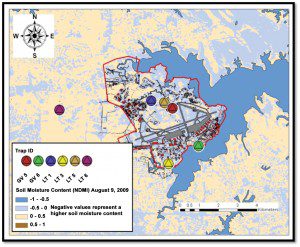 To minimize the impact of vector-borne diseases such as West Nile Virus, the DEVELOP team used GIS to map mosquito trap locations and soil moisture indices.

Using historical and forecasted data from the National Climatic Data Center and Pest Management at Langley Air Force Base, the DEVELOP team studied the future role of spreading disease and growing heat stress on LaRC. For example, the team integrated information from mosquito counts, temperature readings from NASA’s Moderate Resolution Imaging Spectrometer (MODIS) satellite and soil moisture data from the U.S. Geological Survey. Such research will help to determine where the future spread of mosquitoes, as a function of climate change, will most affect the center.

“By knowing where the mosquitoes are and how they are spreading, we can help the community by minimizing the impact of vector-borne diseases, such as West Nile Virus, which can ultimately impact center productivity,” says Samantha Barnes, a sophomore studying biology at Johnson C. Smith University.

Such data, whether in relation to mosquito populations or rising temperatures, has allowed the team to make suggestions on the location of future building projects.

The DEVELOP team is providing valuable information and maps about how future climate change will impact LaRC’s functionality and sustainability. As a result, the team has been able to make a meaningful difference in LaRC’s future and gain valuable experience in applying GIS concepts and remote sensing to real-world problems.