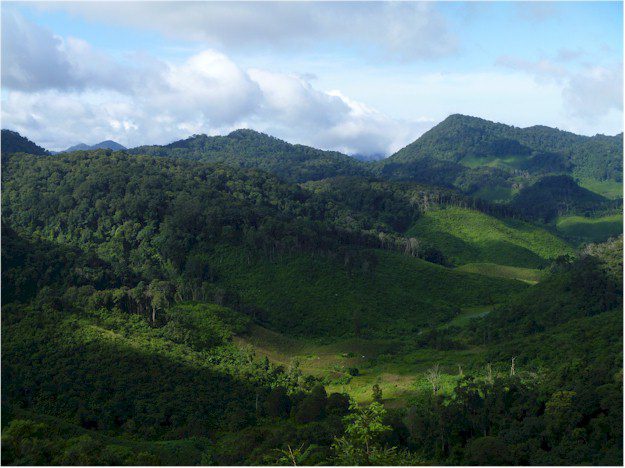 Tigers have nearly disappeared in Indochina, signalling danger signs for many other species. Â In a race to preserve critical wildlife habitat, geospatial tools are essential to success.

By Victoria Caplin, a freelance writer based in London. 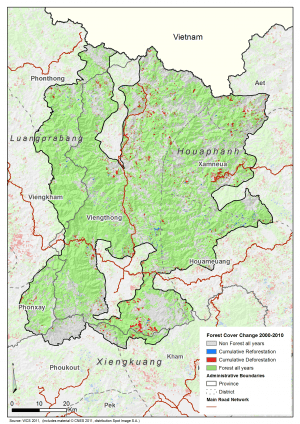 Change analysis was performed from one year to the next to identify areas of deforestation over three time periods.

The Nam Et-Phou Louey National Protected Area covers almost 600,000 hectares (about 2,300 square miles) of wild, mountainous terrain in the northern reaches of the Lao People's Democratic Republic (Laos). The area is home to one of the last tiger populations in Indochina and one of the most important remaining populations of northern white-cheeked crested gibbons, a critically endangered primate found only in northern Vietnam, northern Laos and southern China. 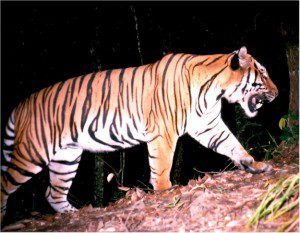 The Nam Et-Phou Louey National Protected Area is home to one of the last tiger populations in Indochina.

Along with illegal wildlife hunting, one of the principal threats to wildlife in the protected area is habitat loss through deforestation and forest degradation. Increasing human population, shifting cultivation patterns and fire have resulted in forests being replaced by large patches of grasslands, bamboo and other secondary vegetation replacing critical forest habitat. These changes threaten local wildlife and exacerbate climate change.

A pristine, natural environment is vital to the preservation of the tigers and gibbons as well as almost 40 other globally threatened mammal and bird species, making the protected area critically important for biodiversity conservation. 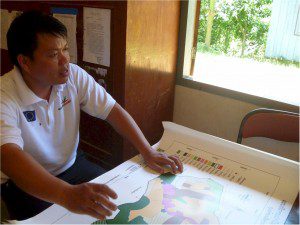 To help protect this habitat, the Wildlife Conservation Society (WCS) in Lao PDR has supported the local Nam Et Phou Louey management unit in implementing activities to protect and manage the vital area since 2003. This includes patrolling and law enforcement, community outreach and awareness, and biodiversity monitoring. But securing sufficient funds to conduct the range of activities needed has been a constant challenge. Laos is a least developed country (LDC), so government investment in biodiversity conservation is minimal. This leaves the protected area vulnerable and largely dependent on international donors.

To address the lack of financing and the threat of forest loss, the management unit and the WCS joined forces with the Lao“German project called Climate Protection through Avoided Deforestation (CliPAD) project to develop the protected area as a Reducing Emissions from Deforestation and Forest Degradation (REDD) project for the voluntary carbon markets. REDD works to establish economic incentives by making the forests worth more standing than the land would be if it were cleared or burned. Projects that reduce rates of deforestation generate carbon credits that can be sold, and the revenue is used to diversify and supplement the livelihoods of local communities. 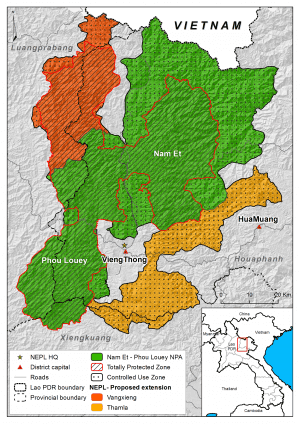 Before the project could move forward, however, an extensive feasibility study was needed to determine if the area was viable for generating carbon credits. WCS enlisted the help of Planet Action, an Astrium GeoInformation Services-sponsored nonprofit initiative that supplies climate change projects with satellite imagery and geoinformation. The intent was to use Planet Action's imagery and software to produce an in-depth assessment of the issues facing the Nam Et-Phou Louey region, including:

¢Â a historical analysis of deforestation and degradation,

¢Â the development of a model to predict future deforestation and degradation rates,

¢Â an estimation of the project's carbon credit generating potential, and

¢Â an assessment of the overall feasibility of the project to access carbon markets.

WCS started by collecting Landsat imagery for the entire area for four dates (2000, 2004, 2006 and 2010) to identify where deforestation was occurring and at what rate. Analyzing so much image data manually, however, would be tremendously time consuming.

The software was used to segment and classify images into different land classes and ultimately into forest and nonforest areas.Â WCS started with the year 2000 as a base map that included full classification and then performed change analysis from one year to the next to identify areas of deforestation over three time periods.

The tools provided by PlanetÂ Action were invaluable for quantifying the extent that the area was affected by deforestation, said Colin Moore, regional advisor on REDD and climate change on behalf of WCS in Laos. Without Trimble eCognition, we would have had to do manual classification on 600,000 hectares, for four time periods, across an area that has very heterogeneous forests. It would have taken forever and may not have been possible within the project's timeframe.

The landscape”a vast sprawl of mixed deciduous, dry evergreen and upper montane forests”is a huge expanse to conserve and monitor, and mapping the mountainous Laos terrain is challenging. The Landsat imagery can be difficult to automatically interpret due to shade, heterogeneous forest types and seasonal conditions, which strongly affect image interpretation.

The image data collected by WCS was used to create detailed land cover and land use classification maps to help calculate carbon stocks and predict baseline rates of deforestation. This allowed for accurate predictions of the project's long-term emission reduction potential, providing a basis to assess the project's ability to generate carbon finance.

Following the area assessment using Trimble eCognition, it was discovered that deforestation rates within the area were lower than expected; in other words, the project would be financially unsustainable in the long run. So a different approach was needed.

In collaboration with CliPAD and the government of Laos, WCS designed a new project encompassing the entire province rather than just the protected area. Trimble eCognition was used to track deforestation across this larger area, an expanse so vast it wouldn't have been possible without the software. With these new results, WCS was able to develop a fresh REDD approach that targeted drivers of forest loss on a broader level.

The new project focuses on developing suitable pilot models for effective forest conservation at the provincial level, which could ultimately extend nationally. Continuous forest cover change monitoring will be integral, so
Trimble eCognition will remain an essential tool for projects and governments as they move ahead with future REDD endeavors.

Unfortunately, the tiger population has changed since the first proposal of the feasibility report. Recent camera trapping suggests numbers have decreased, and a viable population may no longer exist; only a few individuals remain. The Nam Et-Phou Louey National Protected Area, however, remains an important site for many other carnivore and primate species.