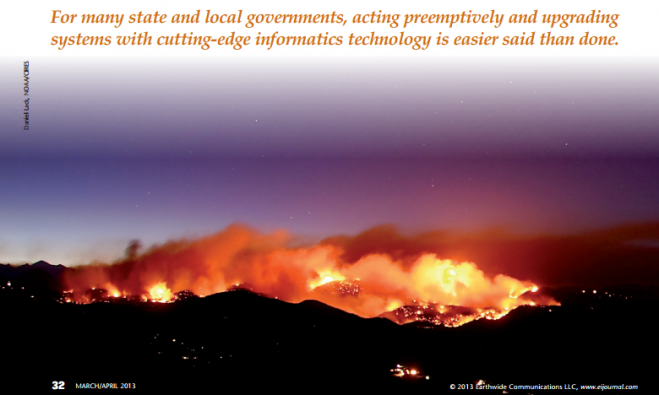 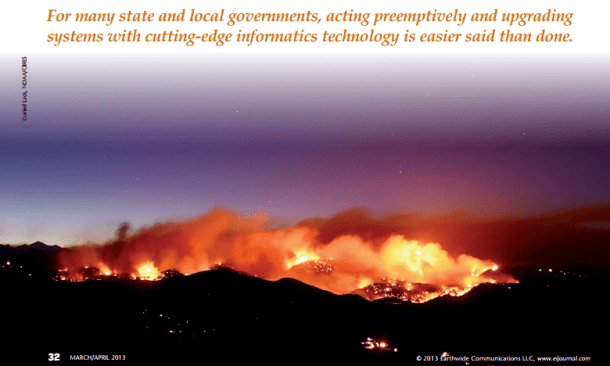 Higher volumes of complex geospatial data have introduced new challenges for decision makers operating under urgent circumstances. Improvements in the spatial, spectral and temporal resolution of remotely sensed optical and light detection and ranging (LiDAR) data have expanded the opportunities to conduct more detailed analysis. However, amidst such an increasing amount of geo-spatial information, one needs to be skillful in the use of available technology to effectively synthesize multiple data sources and provide end users with comprehensive information that’s timely, decisive and meaningful.

More Data a Blessing or a Curse?

Common wisdom asserts that more data are a boon to an inquirer. Upon closer examination, the answer to whether more geospatial data are a blessing or curse largely depends on the capability and readiness of the inquiring system and the associated workflows it supports.

An open floodgate of geospatial data quickly can reveal deficiencies in the capabilities of an existing data management and analysis system and identify areas for optimization. Ideally, geospatial data analysts and consumers will have a way to fine-tune the data tasking, acquisition, processing, analysis and dissemination systems on which they depend to derive information about the world around them. 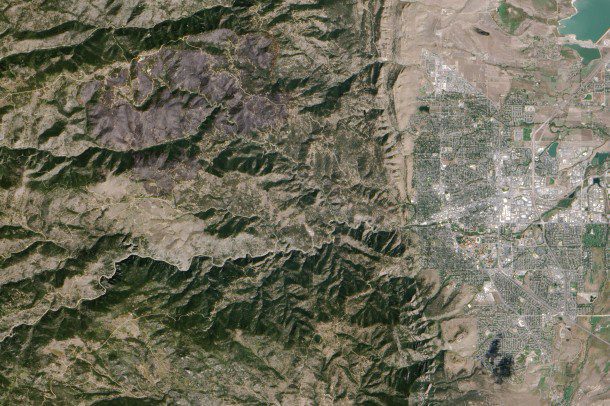 For many state and local governments, however, acting preemptively and upgrading systems with cutting-edge informatics technology is easier said than done. Municipalities often are mired by legacies of distributed data management and software technology resulting from a lack of centralized, well-managed and policy-driven information technology infrastructure.

“Necessity is the mother of invention.” This saying rings particularly true when a resource-constrained government agency is thrust into an emergency management situation during which the timely production and dissemination of actionable intelligence can mitigate the loss to property and, in some cases, human life. In areas throughout the western United States that experienced severe wildfire events in recent years, situational awareness was a necessity for officials managing quickly changing operational environments across multiple jurisdictions.

For example, recent Colorado wildfires that occurred in locations between wilderness and highly developed areas resulted in the evacuation of tens of thousands of residents. During evacuations, displaced citizens eager to learn the fate of their homes placed an immense demand for updated information upon local officials. Available vector layers, topography and daily feeds of multimodal imagery data must be processed and fused together to assess the threats of an ever-changing fire line to infrastructure as well as the safety of residents and first responders.

The need for information motivates the use of available data and technology, whether accommodating systems are in place or not. And, when the outcome of a national public relations situation involving displaced tax-paying residents hangs in the balance, the ability to convert complex data into timely information becomes paramount.

In the rugged foothills of Colorado’s Rocky Mountains, topography largely dictates situational awareness during a wildfire. Terrain analysis provides insight into degrees of accessibility—the ability for overland travel by man; machine; and, to a certain degree, the wildfire itself. 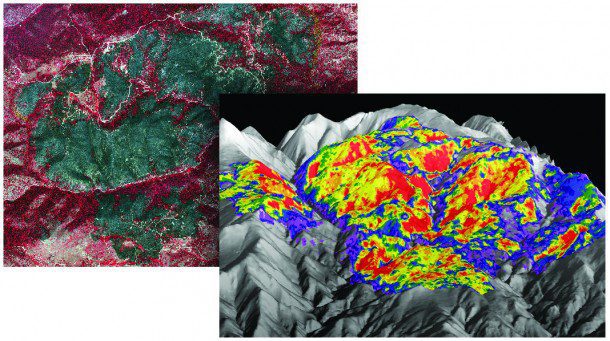 Various types of geospatial data offer unique insights on wildfire management, as indicated by these two images of an area scorched by the Fourmile Canyon wildfire west of Boulder, Colo., in September 2010. The top left color infrared image depicts the forest fire burn scar extent. The bottom right image is a 3-D terrain perspective with a multispectral burn severity overlay.

LiDAR data, due to their vertical and horizontal positional accuracy as well as the relative ease with which they’re collected from aerial platforms, are a prevalent information source for topographic intelligence. Modern software packages are able to ingest LiDAR data, even with sparse ground sample distances, and generate digital terrain models (bare earth models) and digital surface models to yield contour maps with much more accuracy than long-standing local reference maps.

Available topographic data in many areas, particularly those with little to no development or population, may consist of 7.5-minute quadrangle maps produced by the U.S. Geological Survey. Such maps may be decades old, and myriad manmade landscape changes may not be represented. It’s likely that the scale and temporal relevance of such maps will not meet the requirements of an area’s incident command group.

However, outdated topography maps no longer represent the inoperable data void they once did.  When understanding the exact lay of the land is required to support an event response, officials can task a LiDAR data collection over an area of interest and use available processing tools to provide a rapid topographic data solution.

In addition to accurate topographic information from LiDAR data, contemporary LiDAR processing tools provide a valuable source of object data for surface features. The ability to identify and vectorize objects representing structures, trees and power lines is important when constructing risk- and impact-assessment models, determining accessibility throughout an area, and conducting post-disaster assessments of infrastructure and natural resources. Municipalities undergo great efforts, often driven by tax revenue and risk-mitigation policy, to create comprehensive inventories of a jurisdiction’s infrastructure. During a crisis, these inventory databases serve as a baseline for assessing what existed yesterday and to provide perspective on the potential impacts of events unfolding today.

In the midst of a disaster scenario, first responders can use features extracted from real-time data collections to quickly detect change—to discretely identify objects displaced or missing relative to reference coverages. The ability to plan response efforts around a specific, targeted area allows for efficient resource allocation among an often cash-strapped response unit. Once in the field, crews can verify impacts to objects and initiate updates to the reference feature database.

Three-dimensional terrain visualization is another important tool made available by the resolute elevation data derived from LiDAR returns. In this form, complex geographic information easily can be interpreted by laypeople, because humans are gifted with the ability to interpret a 2-D image as a 3-D object.

It’s wise to consider that emergency-response personnel may not be geographers or otherwise geospatially aware. The ability for an incident commander to generate a report that instantly conveys awareness of an object’s location relative to a projected terrain surface—and disseminate such a report to a volunteer field crew—can be invaluable in terms of performance management.

The same concept holds true from a public-awareness standpoint. Graphically rich, realistic representations of complex information may be more easily consumed by the public and prove to be effective communication tools.

Connecting the Dots During a Crisis

Simple locational and proximity analyses have been conducted since early digital mash-ups of similarly scaled aerial photography and GIS layers were possible, but the degree of interoperability among contemporary geospatial tool platforms takes the concept of a cobbled mash-up to a new level. In particular, technology that facilitates multifaceted and multidimensional analysis applications is improving the ability to gain situational awareness about an area or event. That this improved intelligence largely comes from interoperability linkages among existing data and tools is welcome news for many agencies struggling to do more with less.

One Risk Gives Way to Another

In the aftermath of recent Colorado wildfires, vast areas of land were so scorched that signs of vegetation were annihilated even several inches below ground. Once the fires were under control, the focus quickly shifted to flood threats. Flash flooding over denuded areas constituted a new threat to life and property, and response efforts shifted to disaster mitigation.

The thermal and optical image data collected to monitor the characteristics of active wildfires now can be repurposed to meet new operational challenges. Using these existing data and image analysis packages, officials determine degrees of burn severity along a landscape to prioritize mitigation efforts.

With the high-resolution topographic information derived from LiDAR, a multidimensional analysis approach takes shape to consider the terrain slope that coincides with severely burned areas. Badly charred landscapes in areas with relatively steep slopes constitute high flash-flood risk and, therefore, warrant immediate receipt of remediation materials—often a mixture of mulch and seed dropped via helicopter. No doubt, the aerial application of landscape remediation materials is expensive. But with multimodal data fusion, an already cash-strapped municipality can maximize available funds by deploying aircraft and material with surgical precision to affected areas.

In recent years, historic wildfires in the western United States provided opportunities to leverage geospatial technology for intelligence products. It’s not important whether the technology was deployed by large well-funded municipalities and featured highly integrated, cutting-edge systems or was facilitated by a small geospatial team working double duty to meet operational demands.

What is notable is that, in general, the integration of available multimodal geospatial data and processing technology is creating new and novel multidimensional analysis applications that improve our ability to quickly gain situational awareness about the world around us. This trend of technological innovation and operational efficiency should be reassuring to local officials who know that, at any moment, they may need to use such tools to manage critical situations.