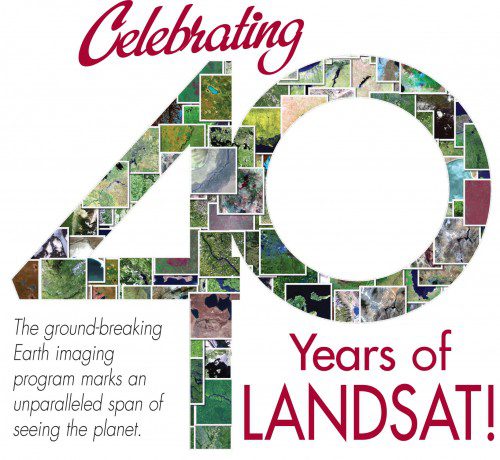 Within days of the launch of the first Landsat satellite 40 years ago, scientists were astounded when they were able to view a dramatic 81,000-acre fire in an isolated region ofAlaska. For the first time, the Landsat scene allowed scientists and forestry management officials to see the full area affected and to identify”in a single image”the portions still burning. Additionally, the image showed the effects of a previous fire and the forest's partial re-growth. 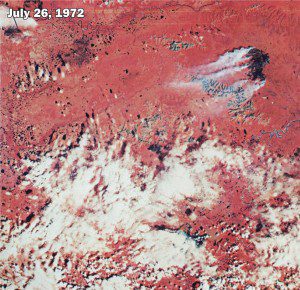 Within days of its launch, Landsat 1 collected imagery of a large fire burning in central Alaska.

The ERTS-1 satellite, later renamed Landsat 1, was launched on July 23, 1972. The satellite was designed to function for about one year, but it operated until 1978 after collecting 300,000 images of the planet's land mass. In its first year, the satellite collected cloud-free coverage of the conterminous United States and more than 75 percent of the global land mass and coastal areas.

The science community quickly welcomed Landsat data. Although the mineral and petroleum industries were the primary users initially, within months Landsat data were used to monitor a wide range of subjects, including:

It soon became evident that Landsat was an important data source. U.S. and international resource managers, scientists, and educators came to rely on Landsat to provide a unique perspective”a perspective that continued for the next 40 years. Through a series of sensor packages, Landsat offered the following benefits:

¢Â Â Â  nearly complete global coverage, because each Landsat satellite's orbit is such that only the near polar caps aren't observed 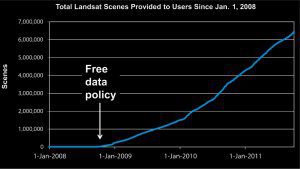 In October 2008, USGS made the entire Landsat archive available via the Internet for free.

Landsat 2 was launched in 1975, and suddenly two satellites were observing the planet around the clock. For nearly three years the two operating Landsat sensor packages permitted more frequent coverage (every eight days) and, of course, continued timely acquisitions. The coordinated orbits of Landsats 1 and 2 made more frequent cloud-free coverage a reality and became a standard for following missions.

A cornerstone of the value of Landsat acquisition developed when it became possible to gain data during or shortly after events. In 1973, for example, Landsat 1 data identified the dumping of industrial waste off the coast of New Jersey 14 hours after the illegal dumping occurred.

In 1980, Landsat 5 acquired cloud-free coverage over Mount St. Helens days before and days after the mountain's historic eruption. The eruption destroyed enough trees to build 1 million homes and caused loss of life and established housing. The Landsat data proved vital as state and federal agencies examined the areas of destruction and planned short- and long-term rehabilitation. Subsequent coverage of the region continues to be used to monitor re-growth of the vast forests.

In 1986, the thermal band of the Landsat 5 sensor was used to detect the 1,000-degree centigrade heat source in the burning Chernobyl nuclear power plant. Again, subsequent coverage was used to monitor the changing land use and land cover development in the Chernobyl region. Regional officials used Landsat satellite data from the beginning of the event to study its effects and to educate those who may face a similar disaster. 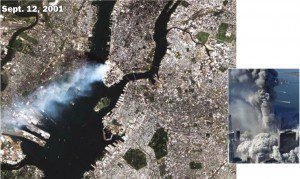 A Landsat 7 image of New York City was acquired on Sept. 12, 2001, the day after terrorist attacks destroyed the Twin Towers. The image still shows smoke emanating from Lower Manhattan.

Although timely imagery acquisitions shortly before, during and after a natural or anthropogenic event have brought appropriate attention to Landsat, an additional important asset Landsat offers is the consistent format of observations over an extended period. For example, a major environmental issue has been the deforestation of tropical zones. Landsat data have been and continue to be used to study the rate of deforestation and the effects of erosion and water quality to tropical regions as fragile soil profiles are exposed. A key point in analysis is that Landsat satellites have provided uniform, objective scientific data used for making decisions on the impact and economic repercussions of land-cover changes.

Similarly, urban development in Shanghai, China, has been a major issue for that region. Landsat 1 data, acquired in 1973, show the area as having a number of small communities surrounded by active agricultural production. Over the decades the urban areas expanded and the crop areas diminished. The impact of the urban growth and the need for human access to water, while food production became more limited, has brought concern and attention by Chinese authorities, and Landsat observations have proven useful for studying the changes.

The global coverage of Landsat observations illustrates the interrelationships of events. The effects of the Kuwaiti oil fires in the 1990s on air quality in surrounding Middle East countries and the rate of burning and the impact on the coastal areas after the fires were extinguished show Landsat data useful beyond the immediate event. Glacial melting and diminished snow packs in the Arctic region affect coastal regions in the upper latitudes, and Landsat data are routinely used to monitor the rate and impacts of melting. 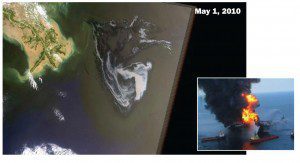 Following the Deepwater Horizon explosion in the Gulf of Mexico on April 20, 2010, a Landsat 7 image shows the extent of the resulting oil slick on May 1, 2010. Landsat data were used to monitor the oil slick's extent and movement.

There are countless examples of the worldwide applications of Landsat data to science and resource issues. The rich archive of more than 3 million scenes in the U.S. archive and 4 million scenes in the ground station archives provides a dynamic photo album of land features over time. Landsat's global reach, supported by a network of more than 12 ground stations around the planet, provide timely, relevant data to a host of regional and continental applications.

Although there's great value in drawing on the historic archive of data collected by the U.S. Geological Survey (USGS), Landsat data are used effectively as current events dictate.Â  Flooding of the Mississippi and Missouri rivers has caused significant problems in the U.S. Midwest for years.Â  Officials are using Landsat data in 2012 to measure the snow pack in southern Canada and the upper Midwest to anticipate the extent of snow cover and the rate of melting. The waters move down to the rivers as the snow melts. In 2012, the snow cover appears to be lessened, and officials are able to predict less probability of disastrous flooding.

It has been the policy goal of the U.S. government from the beginning to make Landsat data available as readily as possible and without restriction. Over the decades there have been concerted efforts to find ways to make the data widely available and readily accessible. A major step in that direction came in October 2008, when the entire U.S.archive of Landsat acquisitions”more than 3 million images”was released through the internet for free. This has resulted in a dramatic expansion of uses of Landsat data.

Increasingly, state and local governments and other institutions now have unlimited access to the data. No group has made more use of the data since the no-cost policy was instituted than the education community.Â  Teachers, university researchers and students are making much wider use of Landsat observations in their science activities and interests. As of April 2012, more than 8 million downloads of Landsat data have been recorded. Access to the USGS archive is through http://earthexplorer.usgs.gov or http://glovis.usgs.gov.

Sparked by lightning on June 9, 2012, Colorado's High Park Fire became the second largest wildfire in the state's history. These Landsat images show the area west of Fort Collins, Colo., the year before the fire on June 8, 2011, and again on June 18, 2012. Landsat images are useful to monitor the area before and during the fire, as well as into the future to discern regrowth and restoration of the forested area.

The Landsat system continues to collect data. However, Landsat 5, designed to last five years, is finally failing after nearly 28 years of service. Landsat 7, launched in 1999, suffered a significant problem in 2003 when its scan line corrector, a device designed to compensate for the satellite's forward motion, failed. Consequently, 20 percent of an individual Landsat 7 scene isn't usable. Still, Landsat 7 data are in high demand as the user community finds ways to adjust to the partially degraded data.

Although LDCM is designed to continue the Landsat-like data well beyond the current Landsat 5 and 7 missions, USGS is working toward a post-LDCM era. Discussions and proposals to fulfill the needs for a fully operational system well into the future are advancing. USGS plans to continue to play a pivotal role in Landsat's 40-year history of seeing Earth for the next generations of scientists, educators and resource managers through a constellation of next-generation observation platforms and ground stations that will evolve from the success of an experimental satellite program launched in 1972.

Editor’s Note: Thanks to Ron Beck at the USGS Earth Resources Observation and Science Center for his tireless efforts on behalf of the Landsat program and his invaluable assistance with this article.